Here is what got improved / changed / fixed on Kudos 2 today:

Plus a long palythrough gave me mroe stuff for my todo list. This game is HUGE, there is just too much to do…

I made a decision with Kudos 2 that I was going to get everything working and looking how I wanted, regardless of how much hassle was involved. Partly this just means changing my state of mind when I’m typing out my ‘todo’ list as I test the game. Rather than mentally editing it to take into account technical difficulties, I just jot down how to improve the game and tell myself not to worry about what’s involved. Then when I go to implement them, I just do it, regardless how awkward some things are.

An example of this was the panel that shows the players skills. This panel just sat there and didn’t have the status update balloons which flash up when you change your attributes, but when playing it occurred to me that this would be a good idea, especially on the ‘post mortem’ screen where many of them change. Making them show up at all involved a ton of recoding. Then I hit the issue that you can have a lot of skills, and they looked horridly cluttered on that post-mortem screen.

So eventually I had to write a bunch of extra code for the skills GUI that rebuilds it just for the post-mortem screen, showing just what’s changed. This is great for the player but was a bitch to code. Hopefully, if I can keep developing like this, the game will have a far more polished feel than anything else I’ve done.

So recently I ordered a ‘Kill-a-watt’, a gadget that lets you plug it in between a device and the power supply that tells you how many watts, volts, amps yada yada it uses. In these times of insane energy bills (mine is now £100 a month combined gas and electricity) I think it’s a smart move to work out where all the power goes. Sure, some companies quote figures, but can you trust the seller of some kit to say how much it costs to run?

The Kill-a-watt cost me £19.95 from here: http://www.reuk.co.uk/buy-KILL-A-WATT.htm and arrived this morning. Here is what the little beastie looks like: 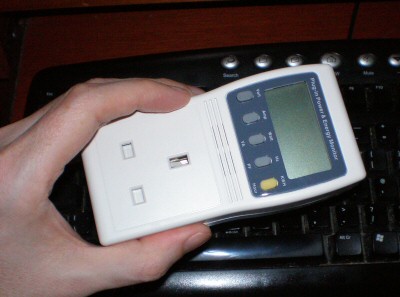 So how do all my bits and pieces of hardware stack up? First lets try that nice flat screen monitor:

So there you have it. later today I might check out what the TV, the Wii, the other gadgets and gizmos draw to see if theres anything stupidly hungry that I’m leaving on (although generally I’m obsessed with turning all this stuff off).

One of the things that emerged from recent playtesting was that the actual value of ‘kudos’ in Kudos 2 was a tad irrelevant. In some ways, it was an unoffical ‘score’ in the first game. getting more kudos was good, because thats what the game was about. it enabled a very few things to be unlocked, and it would slowly degrade (and have a static element based on friendships).

This sucked a bit, and needed re-jigging. I did part of that today. Kudos is n longer a seperate score, next to the current cash, and it’s now an attribute like health, IQ or Culture. You build up your kudos just like any other attribute, and its the games shorthand for ‘cool’. So buying trendy sunglasses, going to nightclubs and hanging out with trendy people raises your kudos. You need kudos to become a TV presenter or other cool udde, but if your character becomes a C++ programmer or lawyer, it’s pretty irrelevant.

I think this (currently) works better than the previous approach.  Kudos is just another thing you can concentrate on, like IQ, money, happiness or whatever, depending on how you choose to prioritize for your character. The good news is the game seems to have a lot of potential right now to enable you to play in lots of different ways, whilst still providing a challenge, and lots to do. it’s already so much better a game than the original. There are of course, lots of bugs to fix, improvements to make, and content to add, but this will be the most complex, polished and feature rich game I’ve ever developed, once it’s finally done :D

I’ve done two one-hour play-throughs of Kudos 2 today, fixing bugs and tweaks as I have encountered them. I still need some more artwork, and tons and tons of bug-testing, plus some game play redesigning to make the actual value of kudos in the game more relevant. here’s my fix list for today:

FIXED *** shrink mind-state button doesn’t work
FIXED *** takes forever to build muscles
FIXED *** movie eat popcorn button needs to shuffle up 4 pixels
FIXED *** fitness maybe degrades a bit quick, esp from weightlifting
FIXED *** if some social event costs 0 and we have negative funds we still cant do it :(
FIXED *** calendar “time for two activities” doesn’t update
FIXED *** soccer needs higher max invitees
FIXED *** food item tooltips are wrong
FIXED *** more police days should be fit ones.
FIXED *** police workers should be immune to muggings surely?
FIXED *** tooltip for job search needs to indicate it shows current job details too
FIXED *** if you keep repeating the same activity again and again, you should get bored
FIXED *** maybe a police sound for when you do the police job?
FIXED *** do sunglasses have any effect?
FIXED *** golf should boost fitness a little bit

This is basically the way I work these days, keep playing the game with textpad open to make a list of stuff that’s broken. then when the game gets unplayable due to one of them, go through and fix them all, then repeat. The game already feels pretty addictive, and filled with stuff, which is good. It’s so much better than the original game.

In other news I see that a major games portal have cloned Kudos : Rock Legend. Meh. Mine has more personality. mine is FROM THE HEART. :D