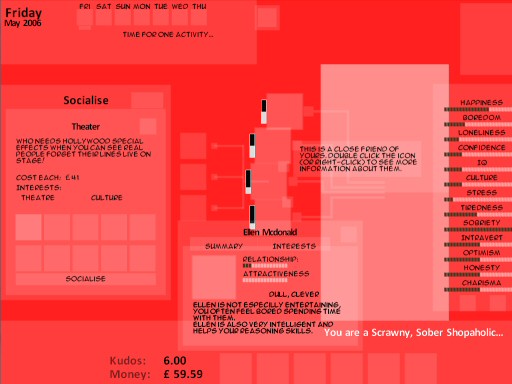 Ok, as it’s sort of a new blog, lets start with an introduction explaining how the hell I got to be doing this…

I first started coding in 1981 at age 11 on a Sinclair ZX81 with 1k of RAM. There was a long break after that when I went to university (LSE : Economics) and tried to become a rock star, then gave up and decided to work with computers. I had no degree in CS or programming experience so had to get an IT job instead (that’s how I ended up working in the city with trading software). I did that for 5 years, and while I was there, I started writing games and selling them online through my IT services company name (That’s why Positech is such a dire name, it’s an off-the-shelf company name). After a while, I tried to do it fulltime (around starship tycoon time) but failed to make enough money and desperately needed a job.
Because I had written about 5 finished games by then (various genres, and a bit amateurish), it was very easy to get interviews at games companies. I worked at Kuju for one day before realising it was NOT for me, and eventually took a job at Elixir Studios, where I did some brief work on Republic (yes! the infinite poly engine!), but mostly on an xbox launch title which we worked on for a year before they canned it. Bah.

From there, I had a brief stint at home again (wrote planetary defence) and then got a job at Lionhead. I was the AI guy (as well as various other stuff, save/load, optimising, copy-protection, GUI stuff etc). To anyone still at Lionhead reading this, the donuts was my idea. I apologise. Also, that cheap toaster is mine, be kind to it. I worked for 3 years on ‘The Movies’, but left just before it shipped. Ever since then I have been working for myself at home full-time. In the last year, I actually finally got around to converting a bedroom into an office so it seems much more professional now.

Some people who read the blog know me from the indie development scene, where I’ve been hanging around for a very long time. Some are people who enjoy my games, and do a fair bit of modding to them (I love making games moddable). And some are people who have read articles by me on the web, or ranted with or against me in various forums. Some might remember me as ‘the helpful one’ on the Lionhead forums, where I was often told off for talking openly about the game. It’s so cool to be able to say anything I want about the games I’m designing, even to post source code when it helps people.

I’ve worked for two people who are very good at game design and very good at PR. Hopefully, some of it rubbed off.

Anyway, that’s who the hell I am. Welcome!

I finally got around to installing word press on the Positech Website so I no longer have my blog hosted elsewhere. Hurrah! Hopefully this is the start of me taking the blog a lot more seriously and putting up some more interesting stuff. The old blog ran for a looong time over at blogger, but it’s time to leave the old blog behind.

Hopefully I’ve installed things right and I won’t lose any readers from the old blog.