Did you know that 95% of the money an indie game makes comes from when that game is on sale and highly discounted? Some pundits put this at more like 97%, although I do hear that other people claim it be 98%, which is nonsense because we all know that 99% is the real figure right? After all, we’ve all seen those exciting steam charts with those big spikes haven’t we? And sales are just GREAT, people on twitter and other social media go bananas over them. they have mini-games and memes. Everybody knows that the way to make money is to put a game on sale! sale! sale! not just 95% off, how about 99% off…etc.

Exciting stuff, which is slightly undermined by it being dead wrong. Like most slightly autistic numbers geeks, I can’t help but crunch the data. Lets look at Democracy 2 sales on a large online portal.

The game was priced at $19.95.  Clearly this is total madness for an iconic, old, 2D strategy game, so presumably nobody bought it full price?

Actually 52% of it’s money came from full-price sales. And that’s a low-ball figure because there was a launch discount (which I don’t even do any more). I suspect it could have been higher. This was an old game, already sold for years from my site, so the real hardcore fans already bought it, yet 52% of new customers grabbed it at full price.

I see those big exciting spikes in sales reports as much as the next person, but it terms out we humans SUCK at making sense of charts like that. We also get lured by the thought of lots of players, rather than actual income.

Another thought worth considering is that at price X, you sell copies to everyone who would be happy to pay X or more. So what that means is that when a game is 75% off, a fair chunk of those buyers might have bought at full price. They aren’t going to donate the other 75% of the money later. Maybe only a few of them are in that position, but you need four sales for each of them to match the revenue…

Sales make money. Sales are good, they allow you to sell to people on the fence, or with less cash. I’m not knocking sales. But when your entire marketing strategy is based around discounts and sales and shoveling your game out as cheap as you can go, you have to ask yourself if you actually ever checked that strategy was working.

So when I first released Democracy 2 on steam, I thought to myself ‘it might sell a few copies, would be good to prove to valve that i was right all along and it is a game that matches the steam audience’. And then it sold well, and then better, and better still, and right now it is my #1 top selling game on steam. It is not overall the biggest earner per week, that’s still GSB, because GSB is split amongst the base game and it’s various expansion packs, but even so, when you realize D2 is much *older* than GSB, it’s quite an achievement. A quick check shows Democracy 2 earned $1,900 in the last week. That’s pretty awesome.

But goddamit I couldn’t do it could I? I just HAD to make a newer, better version. Why?

When I look at democracy 2, lots of things bug me about it. Stuff not done right, stuff not included, graphical roughness, simulation glitches, all kinds of stuff which screams out at the games creator but which most players don’t notice or forgive. I felt that there must be (surely!) lots of people out there who were playing Democracy 2 and thinking ‘he hasn’t really done the concept justice though has he?’.

So whether or not it was a sensible business decision or not, I took it upon myself to make the third version of Democracy. I’ve never done a ‘3’ before. And as I prepare to launch it into pre-orders and beta (mere days away!), I find myself slightly niggled, in a ferengi sense, that I am about to effectively kill off Democracy 2 by releasing a bigger, bolder, brighter, better version. It may not be the smartest business decision ever. I should probably have made Gratuitous Space Battles 2 instead, or made another new game, and THEN come back to the democracy series.

Sometimes you just have to let the creative part of your brain beat up the business part though :D

Do you know what day it is today? well if you are in the United States today is TAX DAY!!! (The day federal taxes need to be paid). You may be happy/sad about the taxes that you pay, and the activities that the government spends it on. Not sure how to feel? check out this handy chart to see where it comes from.. 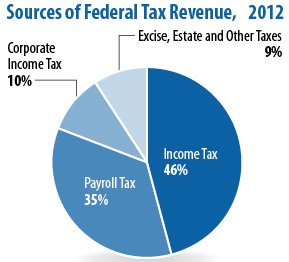 and where it goes is shown in explicit detail here…

Want to change some of those numbers? Then you are in luck! Because to commemorate this day, Democracy 2 is…

ON SALE ON STEAM TODAY.

Go grab it, and if you aren’t sure you will like the game, check out the official website that explains it here.

Have you voted yet? Do you even know what I’m on about? Obviously I’m talking about the most important event of today globally, which is that Democracy 2 is today’s daily deal on steam. Grab it while you can! while stocks last etc! And if it gives you a taste for politics, there is apparently an election taking place today in a country called The United States of America. Which one would you vote for? Mitt Romney or Barack Obama?

Apparently it’s ‘too close to call’, which i think is a cynical ploy to get us to buy more posters and buttons. Also, apparently this is the first time election spending has gone over a billion dollars. That’s more than the entire budget of my last game. Shocking.

Don’t forget to retweet, or tweet, or generally tell the world that Democracy 2 is the steam daily deal today.

Something very interesting is happening with Democracy 2. because the game is now on steam, for the first time ever I am getting accurate figures for how long people play the game for. Steam tracks that automatically and gives you nice charts and graphs for it, which is very handy.

The values for Democracy 2 are staggeringly high. They won;t seem high, when i tell you what they are in a minute, but from chatting to other devs, and looking at my other steam games, they are disproportionately high.

For those who aren’t familiar with it, Democracy 2 is a pretty complex strategy game, that is based around running a fictional country. It has a fair bit of text to read, but nothing like the backstory in a game like dishonored. It’s a game of balancing competing needs (which is essentially what all strategy games are), and it has a lot of variables to tweak, just like all my games do. 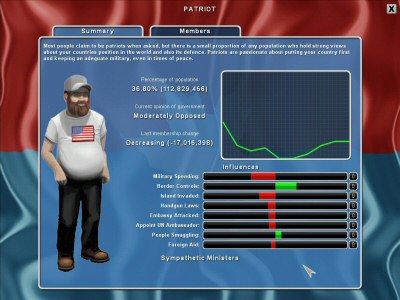 The median time played right now is 2 hours and nine minutes. Does that seem short? Trust me, it’s pretty long, because the values are massively dragged down by people who buy games on impulse in a one-day sale, and only ever play them once. (Steam only counts games that have been actually played for a minute or more). For those who love comparing stats, the average time played is 3 hours 33 minutes. The game has been on steam less than a month, so you would expect that value to rise over time, as people revisit the game (although D2 has not been in a steam sale, which might explain some of this)

That compares extremely well with Gratuitous Tank and Space Battles. The average play time per session for both games is pretty much identical, but there is a massive difference in the distribution of time played. GTB basically hooks everyone for at least 20 minutes, then there is a falloff downwards until you reach this massive spike at 200minutes+

With Democracy 2, everyone is playing at least an hour, then there is a smooth drop off to the eight hour mark. D2 doesn’t have this weird U shaped distribution like GTB does.

Which would imply…errrr?  maybe that GTB does a bad job of helping people through the mid-game, but if they manage it, they are hooked and play forever. I wonder if people get stuck on a specific level, and then either make it through, and keep having fun, or they give up? some aspects of the game design are based entirely around avoiding that situation, but they may be failing.

two things I definitely conclude are that a) it’s good data to have and b)Democracy 2 does very well despite it’s age.