Starting to wind down towards normality

Yikes. the last few weeks and months have been INSANE. I have been doing too much stuff, to the extend that I put back one project (a big one) to next YEAR, and put the thing I was coding on hold, just to take care of Shadowhand, Democracy 3:Africa and the Big Pharma:Marketing & Malpractice DLC. Plus I have another TOP SECRET thing that I’m publishing in the works (announcing that soon actually…).

But now things are not QUITE so totally insane. Democracy 3:Africa has shipped!. Its selling quite well, technically slightly better than I had projected. It has not broken even yet, but you shouldn’t really expect that within a month, or even 3 months really. If this was a new car or a wind farm, I’d expect to break even in a matter of years, not weeks, so I’m not going to worry about that for now.

We also shipped the Big Pharma:Marketing & Malpractice DLC, which is just totally AWESOME and you should give it a try. Thats also selling well, very well in fact, so that’s good news. As a result of shipping those two games, I am back to a normal, rather than insane, level of intense overwork.

So right now my focus is on a patch for Democracy 3:Africa (balance tweaks mostly), and the website for Shadowhand, which is nearly there. I hate over-complex CSS so I’m doing it myself to keep it simple, its nearly done and the code is really clean and simple, which means easy to edit. We aren’t making a song and dance about the website yet, but we will be promoting Shadowhand a lot more closer to its release in a few months time. Starting Monday, I’ll be returning to the thing I was working on before all this madness, which involves me coding again (yay!) and designing again (yay!) and I’ll be announcing what that is in a few weeks. I’m determined to really take my time with that project… 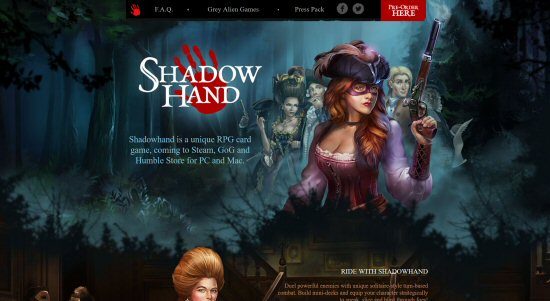 So in this slight lull in the insanity I have found time to do a few much needed things. I bought a new PC. I am on windows 10 now which I hate, but I bought stardocks app to return sanity to the start menu. Apparently Object Dock no longer works with Windows 10, so I’m hilariously using an app that runs the windows vista sidebar widgets on windows 10. How can Microsoft suck so much? In other news, I bought a cool gaming headset with built in mic, which will make skype & video blog recording easier, although so far the mic seems kinda noisy. I also bought Ashes of the Singularity, which is a fairly conventional RTS, but holy crap it looks nice, and I’m already a bit addicted. I bought a clamp/bracket for my exercise bike so I can play mindless casual games on my ipad whilst getting fit… and I bought ‘The Blu‘ for my Vive, which has the most STUNNING visuals you can imagine. If you have £2,500 spare (yeah I know…) BUY a new PC with a 980TI (nothing less), BUY a VIVE, and get it. It will blow your mind. 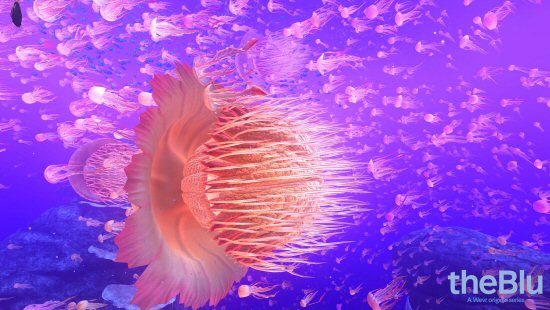 Right, I have gardens to strim and website CSS to wrestle with.

Today is THE DAY that we add some slimey business practices AND some really cool extra production-line whizz-bang cleverness to Big Pharma, in the shape of this breathtakingly exciting expansion pack:

Big Pharma: Marketing and Malpractice adds a whole bunch of cool stuff. There was a lot of beard-stroking between me and Tim deciding what to put in an expansion (mostly by me, Tim is too young to grow stubble). Some of the ideas in there are cool business-geek stuff like setting individual prices for your drugs (you no longer have to just accept the market price, you can build up stock, or sell at a loss, undercut competitors, sell better drugs at a premium etc…) and some of them are things that just generally expand upon the whole production-line geekery. For example you can now link separate rooms of the factory together. Oh yeah… Plus we have ‘stock gates’… 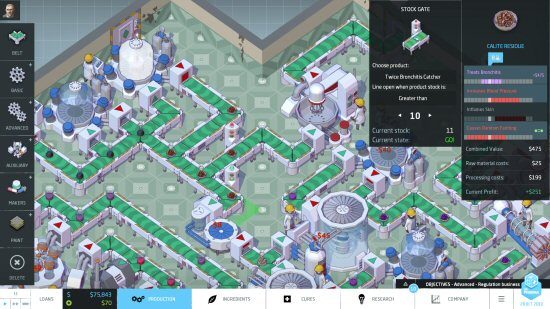 which sound boring, but in fact I reckon are going to be awesomely popular. Essentially these are systems that let you say ‘halt production if we already have 100 boxes of this’, but the key thing is they can go ANYWHERE, which means a single ingredient can come in, and be delivered to different production lines by a branching conveyor, depending on stock level of certain drugs, effectively letting you automate the process of switching from one drug to another as circumstances and prices change.

Other stuff includes advertising, corporate gifts, sales executives, and cool company-wide ‘perks’ you can unlock such as these… 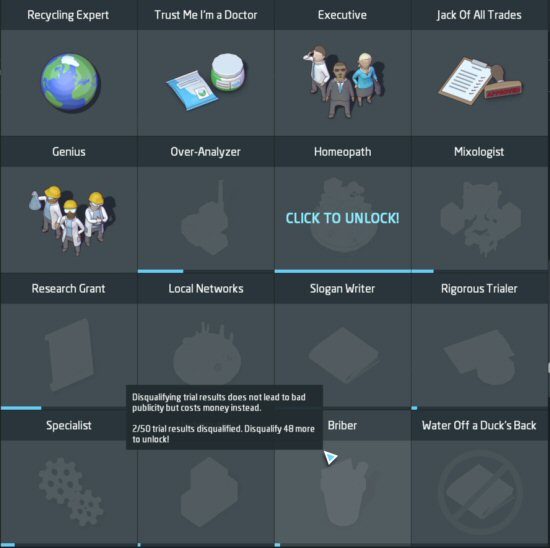 Big Pharma was as popular as an anti-aging cream that also cures obesity when we released it, so we are naturally concerned that this DLC will bring steams infrastructure to a crawl, so sorry about that. All the more reason to jump in and grab the expansion pronto. You can buy it using the cool humble widget direct from us

or the humble store.

Or this new other we are experimenting with (we think it might get popular) called Steam.

We really welcome those all-important steam reviews from happy pharma-tycoons. We also welcome people who spontaneously tweet and facebook share news of the expansion. Obviously if you really cared, you would get home-made T shirts done, and walk up and down your local mall imploring people to buy the game, but those forum posts and social media spreadings are also a good way to show you are a ‘good’ person, so don’t be ashamed if that’s all you do.

Yes it’s true. Positech has some polish news. Oh yes. We have teamed up with CDP.PL to distribute polish copies of both Big Pharma and Democracy 3. Evidence can be found below (Actually boxed copies are AMAZEBALLS). 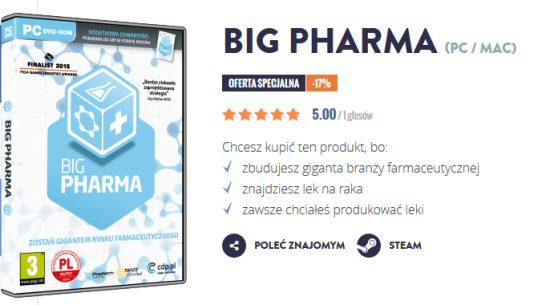 Coool huh? Plus CDP have done some amazing thing with democracy 3 that includes polish scenarios and other cool stuff. They have really gone the extra mile. Plus they have put up with my dumb ineptitude of having not coded the engine in unicode and all the HELL that has resulted from this mayhem… Here is a box with some stuff… 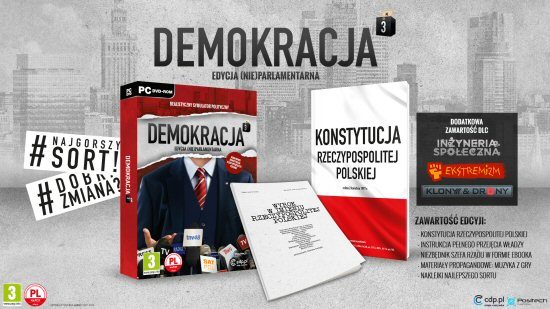 So yeah…I don’t normally work with retail publishers because some total bastards really screwed me over once and I am still annoyed about it, but CDP seem really cool. Also, as a result Democracy 3 on steam is now also available in polish. I know the way it all works is a mess, we will eventually fix this to be like Democracy 3 Africa with a simple drop-down box to select language but thats all in the future. And if you aren’t excited enough already, here is a youtube video with Tim talking about the incredibly cool new Big Pharma expansion pack thats coming VERY soon:

Yup, we released Democracy 3 Africa a few days ago, and its nothing but Africa and Democracy around these parts right now (although as I type this, the royal air force are practicing above my head and its like apocalypse now…so maybe not). HOWEVER, the positech EMPIRE is now so vast that we have other stuff going on…for example this rather exciting enw DLC for Big Pharma called Marketing & Malpractice… here is the latest video from designer Tim, showing off some of its cool bits…

Wow, talk about busy busy busy. We are just SEVEN DAYS (OMG) away from releasing Democracy 3 Africa. My mind is full of Tourism, Malaria, Foreign Investment and cool African music. I’ve also been doing some more playtesting, and recorded my futile attempts to fix the problems of a seriously in-need-of-help Zambia in this playthrough…

Democracy 3 Africa will be on Steam, Humble Store, Gog and direct from us at our website. It will be $14.99 on Windows and OSX.

But whats that? you are more interested to hear about recent developments in Pharmaceutical marketing? Well do we have the video for you! This is Tim (Of Twice Circled fame)  trying to explain what features are in the amazing new Big Pharma expansion he is working on, whilst some idiot makes silly comments and distracts him: