Whilst trying to fix something else, I just found a bug in the campaign capture code. It looks like when you capture a fighter squadron of 12 ships, it gives you 12 squadrons of 16 ships instead. Then when you fight with them again, they end up squads of 120 fighter ships each somehow… 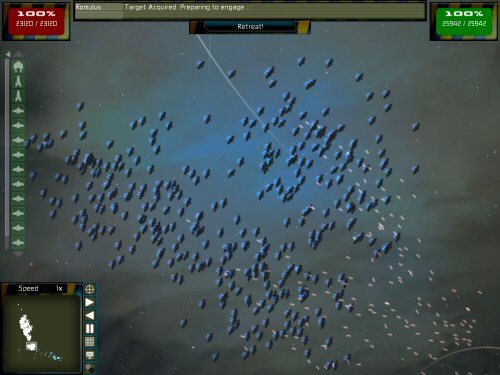 Methinks this is a bug, although it’s quite a fun one :D Also interesting to see how easily the game coped with the fighter squad size limit being exceeded. That must just be a GUI limit then, which is interesting. maybe I’m not such a crap coder after all?

Campaign code is trundling along. Slightly distracted by some work fixing Kudos: Rock Legend so it works with new video card drivers, plus planning on quietly making the crappy GSB hull editor usable at some point, and helping with the Mac port of GSB. (Yes, really it’s coming…)

I think one of the things that makes a GREAT game better than a GOOD game, is that the great game has atmopshere. People in suits think you can buy atmosphere by spending money on FMV or lots and lots of artists, but that’s just not true. Thief 2 had AWESOME atmosphere, at a twentieth the budget of Oblivion. (guess).

One of the ways I try to ensure I get the right atmosphere into my game is to have constant reminders of the theme of the game in my head. Most of the time game development is just typing and scrolling through code, so it is easy to forget that its about lasers, explosions and battlecruisers going pew pew. That’s where headphones and multiple monitors come in. The vast majority of the time I’ve spent coding GSB has been spent either blasting the music from Star Trek or Star Wars through headphones (or out loud now :D) or having a DVD of some suitably epic space battle sci-fi playing in my extra monitor, like so: 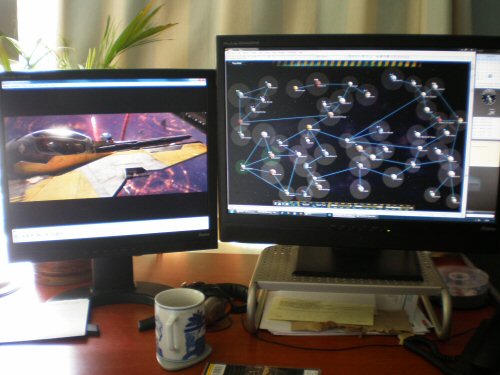 It really helps me to stay focused on what I’m doing, and how it should feel. Good games are about feel, not polygons or features. Just Cause 2 makes me *feel* like an action hero, in ways that mere technical ability or hype or clever graphical effects never can. Thats a great feeling. The guys who do puzzle pirates have the money to take this a stage further and they do. Good for them.

The nearest I’ve got to atmospheric experiences concerning aliens today was visiting a crop circle nearby. Never seen one before. Here is me in the middle being silly 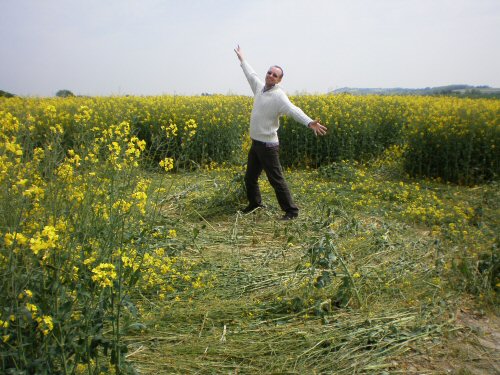 Here is the cicle taken by a proper photographer. 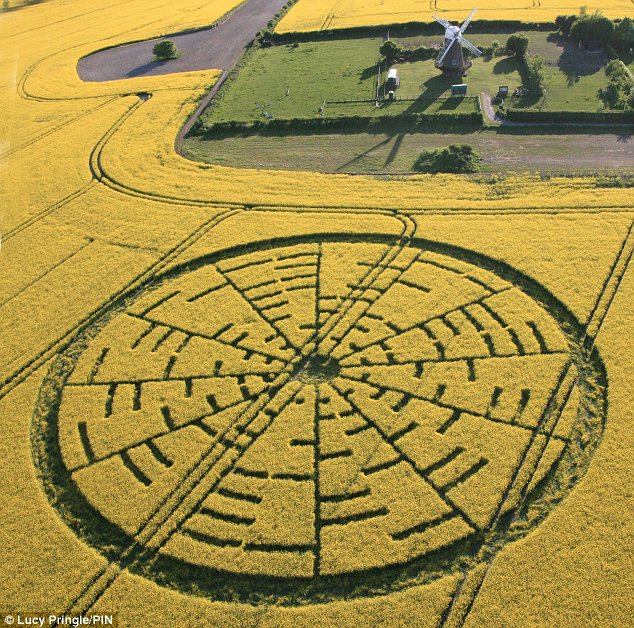 They are pretty dull at ground level tbh. I’m sure whatever aliens make them are not ferengi, because there was nobody selling hot dogs, or even a strategically placed big ladder that they could charge admission for, to get a  good view. “Twelve rungs up? That’ll be three strips of latinum please”.

Apparently it’s a maths equation, if the circle radii get converted to ascii. I bet it was those do-gooder vulcans.

This article on bit-tech is by me:

My point, which is pretty much glossed over in most discussions about DLC, is that variety is good, and the free market will decide. Some DLC is overpriced, some is underpriced. Some price experiments for games are mental, some are a complete giveaway (like Portal for free). Eventually, the free market gives us the right answer.

As an example, I think that $25 for a single horse mount in WoW is flipping MENTAL, when I worry about charging $6 for an extra GSB race. But… the free market has proven me wrong, people bought it in droves. Who am I to criticise either people who think a mount is worth $25, or Blizzard for setting a price that maximises their revenue?

I’m, just a bit sick of kids describing game develoeprs as nazis for not releasing everything they make for free, and thus venting :D

I hate the x-factor and american idol and similar programs for many, many reasons. One of them, is that you constantly hear people who are awful at singing or dancing saying they have ‘done their best’. This is clearly bullshit 99% of the time.

We seem to have developed an entire culture based around low expectations and under-achievement. Mediocrity is the new celebrity. Putting effort in is so last year. The reason we all love ‘reality tv stars’ is that they perpetuate this bullshit that you can have the trappings of success and fame without doing any work. No need to do your best any more…

There is a great scene in an episode of Star Trek: DS9, where worf fails to help his brother die in a ritualistic suicide because they are interrupted by some humans. Worfs brother confronts him over his failure to help him, and worf protests that they were interrupted by two (weaker) humans. His brothers response:

“Did you fight them? Did you threaten to kill them both if they interfered? And are you here now with a mevak dagger to slit my throat and bring me the death I deserve?”

In other words, this is the klingon way of saying “So? is that the best you could have done?”
I like that. I see it so often, in others, and also in myself. I don’t think I’ve “given it 100%” or “done my very best” very often in my life. I rowed like a maniac once in a thames river race, but despite being knackered at the race end, I didn’t actually collapse and need to be taken to hospital. I didn’t burst a blood vessel with effort. If the life of myself and the people closest to me had been at stake, I could have rowed much much harder.
Gratuitous Space Battles is a game I worked very very hard on, But I didn’t work 100 hours a week on it. I didn’t skip TV entirely for a year to do it, or sell everything I owned to invest it in the artwork. I didn’t scrap the entire game and re-do it and the slightest hint of dissastisfaction. I didn’t do my best.

One of the best things about knowing, accepting and really understanding what it means to do your best, and to know you have not done so, is it means you can definitely, 100% no doubt about it, do better next time. People who go through life saying “I gave it my best shot” are just scared of admitting that in all likelihood, they didn’t, and have themselves to blame.
Of course, it might not be worth it to you to go to the extreme, insane lengths of actually doing your very best in everything you do, but I think its a good policy to know the tradeofs you make, as you make them.

I’ve been slightly sidetracked recently by the release of the Swarm DLC on steam (few technical issues there) and some updates to the core game which will filter through in the eventual next patch. Meanwhile, slow but sure progress continues on the fun and games of the campaign game. Here is a current work-in-progress coder art style screenshot. I’ve just finished coding the ‘scrap ships’ UI so you can scrap ships to recover some of the money. You only get 25% of the value, so it’s a desperate measure rather than a simple way to refit the fleet. It might be useful for when you have damaged ships not worth repairing, or for when you capture enemy ships that don’t suit your current fleet. 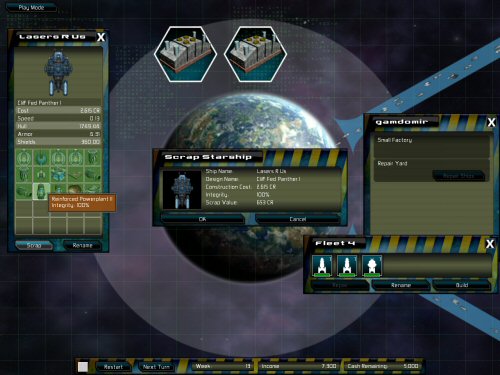 In other news, I now no longer find the big clump of black birds that live in a tree in our garden to be cute. Bastard things woke me up at 6AM this morning. I suspect they are ravens, or maybe pterodactyls. Certainly not as cute as I recall. Jack now has my express permission to get the bastards. He’s been practicing on the smaller birds. So far it’s about 5:0 to him. Nature eh?