They say that there are 800 million people on the web, and google claims to have indexed over a trillion pages now. Anyway you look at it, the web is a BIG place, with tons to offer, lots to do, and bags of opportunity. The web is the very first real worldwide marketplace, where anyone (even a guy in his bedroom in England) can sell something he creates all over the world, to an audience in the hundreds of millions. Surely there is a catch?

The catch is, that those 800 million people aren’t looking for what me or you makes, and even if they did, it’s not easy to find us. I think part of the problem is that as human beings, we haven’t really adapted our brains or our attitudes to the web. We are still thinking like apes, clustered together in our own little social groups.

Think of the last time you read the world news online. Think of the time before that, and the time before that. I’m 95% likely it was the same sites all three times. Right? I know I get my news from the same place (BBC news), despite the fact that I could just as easily read it here or here or here. And that’s just the Uk take on the world news. Maybe I want a US view? or maybe Australian? How about a totally different point of view?

I don’t go to any of those sites often at all. I stick with what I know. So do most people, for news, stock market information, travel information, the weather, and for entertainment.

If people get their games news from a site that doesn’t ever feature indie games, they may never hear of my games. If they buy their games from Steam, I’m invisible to them. If the maybe 0.01% of games sites that i advertise with arent on their radar, I am invisible. Obviously that’s bad for me, but it’s also bad for them.

When was the last time you went to a totally new website that you haven’t visited before? and what percentage of your surfing is truly exploring what’s new, as opposed to rechecking the same 20 URLS in your bookmarks? And most relevantly to me, where do YOU get your games news, reviews and demos?

Have I mentioned this yet? Democracy 2 is now out on the Mac.

BUY IT HERE or get the demo HERE

In other news, WTF is in my fingers? Acid? My keyboard is gradually losing it’s most used letters: 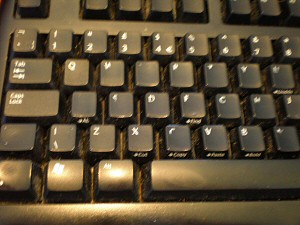 I suspect its my fingers. I managed to wear off all of the black coating on my guitars volume knob too: 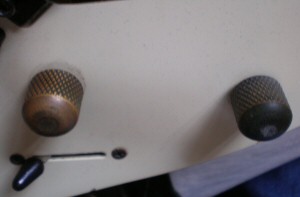 Know anyone with a great indie game that has really bad art or music, and could do with $400? Nominate them…

According to a recent perusal of my ad stats, it seems that I get a better return on investment advertising Democracy 2 on politics commentary sites than I do on news sites. I get as many site visits from both, but the people coming from the news sites are more likely to buy.

I can’t pretend to be massively shocked. Hardcore gamers tend to be a bit more demanding of games visuals, many of them refusing to even consider playing a non 3D game. A lot of gamers also have a ‘shopping list’ of features that MUST be in every game if they are to buy it. They demand multiplayer, co-op, extensive mods, variable resolutions, a persistent world, HDR lighting, several hours of music, etc etc.

People who don’t generally play games tend to be more impressed just by how easy it is to play, and how much fun it is. They don’t automatically compare a game to it’s rivals, as they haven’t played them. Very few people who bought the wii as their only console ever bitch about its low-poly models. They have no means of comparison, and don’t care.

Perhaps this explains the whole casual-games boom? These gamers don’t know any different. They don’t demand multiplayer or 3D, because they don’t know what they are. They just want fun. Happily, they also don’t know about pirate websites (or are too sensible to risk using them). Anyway you look at it, these people are a desirable group to sell my games to. Thats’ something I decided today :D

There is a big difference of opinion in the indie game developer community regarding whether or not to sell direct or work with portals. For new developers with no web presence doing casual games, its an easy choice (use portals). For devs doing hardcore games that are not portal friendly (big RPGs, FPS games, hardcore shooters) the choice is easy too (sell direct). For the people like me who have both options available, and do games that are part hardcor, part casual, it’s more of a dilemma.

On the one hand, it’s mad not to use them. Some portals (like bigfishgames) have a HUGE audience, and can put your game in front of tons of eyeballs. They can generate serious income for you, and they do marketing, promotion and some limited customer support. Probably more people bought Kudos from a portal than from me.

On the other hand, the portals customers remain theirs. I don’t get their email address, or any custom from them. A portal sale boosts the profile of the portal, more than me, and that’s effectively helping my competitors to grow. Also they take a BIG chunk of the money. It *might* still be a good deal though. There are two further things that need to be calculated though:

1) Are people buying the game from the portal rather than me, who would have bought direct from me otherwise? If so, I stupidly gave up a chunk of my sales to someone for no good reason.

2) Will the portal undercut me? If a portal has no cap on the sale price of the game, then they can churn it out for $5.99, making my prices seem artificially high. I’m effectively forced to play ‘match the lowest price’ with all the portals I do deals with. I can’t make a living selling games for $5.99. These aren’t throwawy bejewelled re-skins, my games take massive effort to make.

So what will I do with Kudos 2? No idea. I am genuinely in a dilemma. It all comes down to hard negotiation over contract terms and minimum prices. I can see portals refusing to agree to anything that prevents them bundling my games for a pittance alongside some diner dash clones. If they really stick with that, then I’ll just sell the game direct. I guess I’m lucky, I don’t *need* the portals anywhere near as much as most indie devs, all thanks to people like you, who found my website, and buy my games from me.

Thanks guys and girls!