Imagine a modern day non-nuclear war between China and Russia on one side, and everyone else on the other side. Now picture it as a purely naval battle. How many people would be involved? Lets say conservatively that each side only fielded 2 million troops (a trivial subset of fit, able potential combatants). Lets look at a big US battleship : The USS Massachusetts has approx 2,000 crew involved. Lets assume only 10% of our navy serve on these big ships (200,000 men) so thats 1,000 battleships, in an all out naval war. (remember we are talking a war for survival, not the relative peacetime deployments of today).

But lets assume a planet with less water-coverage than earth, and slightly larger, so it has double our population. Thats a factor of two. Now fast forward another two generations time wise and assume a doubling of that population again. Thats x4. Now assume that they are all on the same side (x6) and that they form part of a federation of 20 such worlds (still an incredibly small speck in an average size galaxy). Thats 120 x 1,000 battleships.

What I’m getting at, is when the Rebel Alliance attacked the death star, they seemed to do it with the sort of navy you would use to maybe lay siege to Malta, or at best, to attack Dieppe. Hardly a clash of galactic powers.  Assume 20% of your 240,000,000 are in fighters and thats suddenly 12,000,000 fighters, or a million twelve man squadrons. Imagine how long “all wings report in” would take… Imagine how quickly you run out of colors?

So I guess that issue, and the whole problem of ILM filming a million plastic model flybys in 1983 doesn’t help.

I know what you are thinking, Even Gratuitous Space Battles isn’t really gratuitous enough is it? Maybe for the sequel…

I went shopping a few days ago, and even in the middle of a recession caused mainly by lending to people who have no money, this phrase is everywhere:

BUY IT NOW, PAY IN A YEAR

I don’t go for these things. In fact, I only ever bought something (apart from a  car) on credit once, purely because they offered ‘interest free credit’ and refused to give me a discount for paying cash, which I found insulting… Anyway…

Why do these things work? Are people really that stupid to fall for it? Actually yes, and they aren’t stupid, they are emotional, or passionate, and they can’t help it.

I’ve been reading more pop neuroscience books, and reading about the difference between the amygdala and the pre-frontal cortex. Basically the amygdala does the emotional stuff, the PFC does the analytical bit.  The amygdala is seeing “BUY NOW” or more importantly “NOW” and the PFC is seeing “pay later…“.

Why does this work? Because the response from the amigdyla is faster, and often (for most people) louder. It’s especially true for the young, when the PFC is still developing.  Thats partly why they can be more impulsive and reckless, and why kids can’t resist taking sweets even when they understand they will get more sweets later if they resist the urge for 5 minutes (Someone tested that, and found it a phenomenally good indicator of future financial success).

It’s all down to evolution, the amygdala gets first dibs on our attention because it does the rapid pattern-matching stuff such as “IT’S A SNAKE!!!!” rather than the cool analytical “it’s a stick” that takes longer. The amygdala takes care of time sensitive vital emotional stuff like fear, hunger, lust etc. It’s the bit that makes negative scary political TV ads work, and it’s also why BUY NOW PAY LATER works.

Our brains have evolved in creatures concerned for short term survival. Its way more important to eat when we find food than it is to worry about being overweight, hence we have huge trouble  dieting. The same is true of all problems with long term planning. You conciously want to work on your indie game, but your amigdyla just wants you to eat, sleep and have sex. It’s a tug of war!

I’ve read that the stroop test is an indication of how your amygdala beats your PFC, but although it’s fun i’m not convinced. Thats just two different types of pattern matching going on surely?

However, I’m sure there is some truth to the thing that we are hard wired for irrational short term passionate thinking. that’s why some we are rubbish at saving, dieting, healthy eating, or basically doing anything that fights our emotions. we are a long way off becoming vulcans :D

If you are thinking how does this make me sell more games, it’s all about how and why people make purchasing decisions.

Now and then I search google for an answer to a question and don’t get a  good answer, and this time I’m doing my bit for the greater good to answer these:

“Is it worth putting foam insulation lagging on hot water pipes?”

“What is the difference in insulation between no pipe-lagging, foam pipe-lagging and foam plus foil lagging?”

Yup, this isn’t about games :D

background: i have a cold old house with a  freezing cellar, and the last occupant did NO insulation. The hot water pipes for the radiators go under the floor in the cellar ceiling, exposed to the cold and damp draughty cellar. A lot of my heating costs were being wasted heating up a damp cellar we never use. So this needed fixing.

Now there is ‘reading books and believing them” and then there is “getting real data”, so I went and got one of these (an infared thermometer £20) 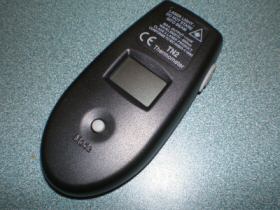 Then I lagged some pipes using that foam insulation stuff, tied on with cable ties. Then as an experiment I doubled up on them by also wrapping that foil stuff you get for the back of radiators around them too, and took measurements. Heres a picture showing all 3 scenarios, where I haven’t finished yet (I ran out of tape…) 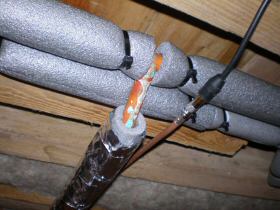 With NO lagging, and the radiators on, the temperature of the exposed copper pipes was 57 degrees.

With just tied-on foam insulation, the temperature of the foam was 21 degrees. ( a reduction of 63%ish)

With tied on foam AND a layer of reflective radiator foil, the temperature of the external foil was 12 degrees. (a further reduction of 15%ish) 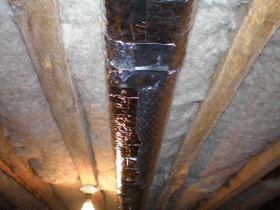 Obviously the lower the temperature the better, I want all that heat kept in the pipes going to my radiators, not leaking out into the cold air of the cellar.

Conclusion: it is HUGELY worth you lagging any pipes in unused unheated rooms with foam insulation. It is also very worthwhile wrapping the lagged pipes with a  layer of reflective radiator foil. I tape it up with special reflective tape and both the tape and the foil is dirt cheap. The foam tubes are about 50p each.

If you pay heating bills where you live, you would be mad not to do this :D

And if you don’t know where the heat goes, get an infared thermometer. They double up as laser pointers to entertain cats.

Spam is getting cleverer. I deleted some spam from the forums yesterday, and about 100 spam comments this morning form the blog. The thing is, they are becoming more and more cunning. They are contextual spams, that do a passable job of imitating genuine comments from people, albeit confused people with English as their second language.

For example, on my blog post about PC power consumption I got this:

“I don’t have concrete figures, but they should be using very little power with no load attached”

I suspect that the blogspam AI has scanned that post, then gone through a huge database of sentences that contain similar words to words which show up in my post (such as power, load, figures) and pasted in a sample sentence from what is obviously a different, but relevant conversation. All very clever. But two things strike me as not very clever:

1) If you are trying this super advanced AI-spam, try not posting 100 comments in 1 day from the same username on different topics. Thats kind of a big huge giveaway isn’t it?

2) This is a shit way to make money. Do you really think that if you spam a million blogs with pointless comments, enough idiots will follow links in the posters signature to convert to paying customers that make it worthwhile? Do you actually think google are stupid enough to push up your search engine rankings because you get 1,000,000 backlinks from totally irrelevant blogs?

The spammers seem to think that if they send enough spam, and get enough traffic, they will get rich. I think that’s an incredibly naive and scatter-gun approach. I earn enough money, but I don’t get a lot of traffic. The reason my traffic converts into enough sales to pay my bills is because I get relevant traffic. Traffic from people who play PC games, preferably strategy games, ideally (at the moment) sci-fi fans or political gaming fans.

If I look at traffic from ‘stumbleupon’ the site that semi-randomly sends visitors to something roughly in a category they enjoy, it converts at a rate of about $0.01 per visitor. If I get traffic from a PC strategy gaming website the return is up to sixty times higher. Quality not quantity. The 1,000 true fans, and all that. My tip for the people behind new AI spam is to go write some decent AI software for something useful such as natural language processing for customer service support enquiries. You will earn more money and feel better :D

She said I could decorate it “however I wanted“.

stage 3: Add some edible gold stars to represent the many star systems of the klingon empire! and tada: A feast fit for a warrior! Qa Plagh!