I’ve been doing lots of stuff around the release of the Tribe expansion pack, so I’ve got behind on work for the next patch. I ended up taking some time to re-balance a few of the least-used weapons, and do some admin stuff, like tweak the challenges code so that it doesn’t show you older challenges in the list when newer ones are available. I also got rid of some really really old challenges. Currently the list only displays up to 1,024 of them, sorted in date order now. That was always enough in the past, now it’s not, hence the tweaking.

I was testing out the new supply limits stuff and trying to ensure it was user friendly at the deployment phase. One of the things I needed was a way to see how much of each supply limit was taken up, and the other was exactly which ships were using up those limits. My current solution isn’t perfect,but it’s a starting point. The supply limits window is on the right, so you can still your fleet. The individual module icon bars now have a feint progress bar as their background showing you how much of that specific modules supply limit is used up. If it turns red, you are using too many and the fleet is invalid. If you click one of those strips, it will highlight the ships in the fleet currently using that module so you can see where you are using them up. 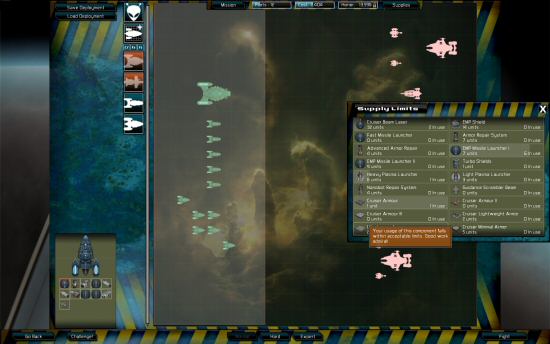 My current thinking is that when I next patch the game, with this functionality included, I will put it in one of the existing missions, so people can see how it plays out (and of course modders will be able to use it). In the lonegr term, this functionality will form part of any meta-game or maybe a map editor that gets done next.

Ok, so it’s finally here. The long awaited invasion of the space tree-huggers* is upon us: THE TRIBE!!!!!!!!! bwahahaha

I’ve never released an expansion pack for a game before, but I think GSB was the perfect game to do so. I have no idea how it will sell. I hope to at least pay back the art costs (which are not trivial). If it does that, then I’m a happy man. Basically this is an extra fleet for the game. In theory this would be moddable, but obviously this way other people will be more likely to also have the same fleet, and it uses the same super talented artist as the others so it has a consistent look. I’m sure there will be GSB players who will buy it immediately, and some who will not see the point, which is fine because that’s what DLC should be about: Options for the player. (someone make some DLC for Company of Heroes. Russian + Japanese + Italian armeis plz)

That’s not to say some big-ass future expansion that adds meta game stuff or whatever is not going to happen. Who knows where I’m heading next after Supply Limits?

I await the verdict of the interwebs with gritted teeth. At least if people complain about the price of DLC, ‘space armour’ sounds more l33t than ‘horse armour’ surely?

Check it out here:

*used in a jovial fashion. I’m a bit of a green geek myself, so I’m not having a go.

This first image shows the choose mission screen, after I hit the new ‘supply limits’ button for a specific scenario. (The button only appears if limits have been defined). Only modules which are actually limited are shown in the list. The new window is highlighted in red. 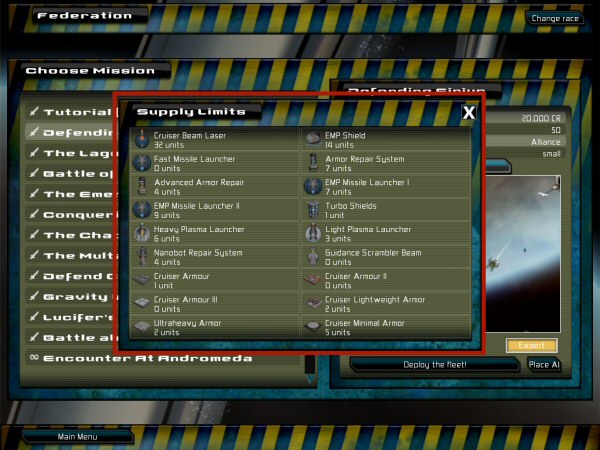 This next screen shows the similar window on the deployment screen itself. The difference here is the game can tell you the current number in use, as well as the limit, and the fraction of supplies used is shown by a subtle highlighted progress bar across each item. One of them is red, and this indicates we are actually using too many of that item. (not possible by dragging, but theoretically possible by loading default deployments). The extra button at the top right is the way this window gets launched, and you will see on the far left that a module which has been ‘over-allocated’ gets highlighted red. 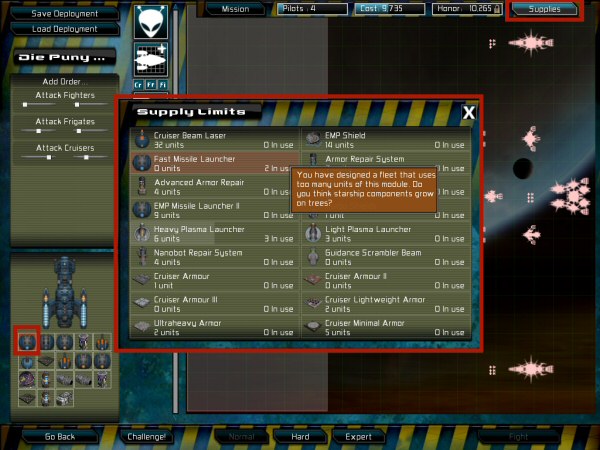 This final screen shows the details window for a selected module on this screen. There is an extra strip at the bottom now which shows the limit and the number of modules of this type currently deployed. 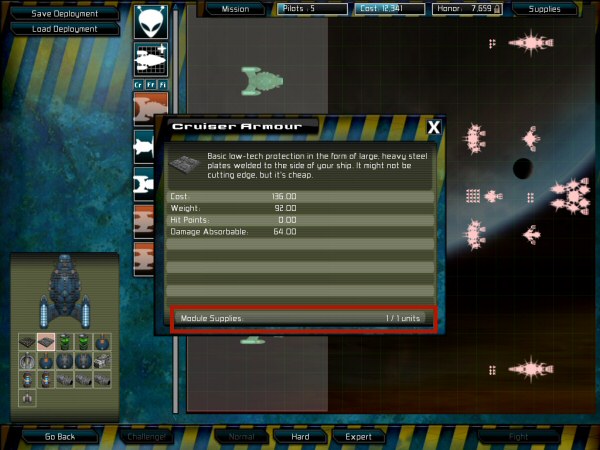 One side-effect of working on this stuff is that the window at the bottom left of the deployment screen, showing a ship type and its breakdown is now decoupled from the stuff above it, showing a specific ship’s orders. What does this mean? It means that when a ship cannot be added, and is greyed out, you can now click it and see its data at the bottom left without having to deploy one. I also changed the tooltips so that even when you can’t deploy a ship, the tooltip will now still tell you it’s name.
The eventual plan for this stuff is to have customisable challenge maps, so players can put together supply limits themselves and embed them in a challenge. I’m not quite there yet, but I’ll likely hold off a while until both features are done before patching.
In the meantime, there will be an expansion pack for GSB released in the next few days. woohoo etc :D