I’ve been working on the challenge browser for GTB. There is still more to do in terms of making it look pretty but there is a clickable screenshot below. Basically there is a scrollable list of challenges just like in GSB, some of which will be user-made maps, some just armies and deployments on existing maps. Clicking any of them brings up the details window from which you can play attack or defence with that challenge,

Unlike the simple username in GSB, GTB shows you the posters emblem, their username, general and regiment name, and the idea is to build up more recognition of especially good map designers and players. You can immediately tell if the map is made by a newcomer, or someone who clocks 500 hours in the game :D

Also, the details shows a list of comments that players of the challenge have left as feedback for the poster, and hopefully as a bit of explanation for other players. With luck, there should be some good, lively debates about the pros and cons of new maps here :D 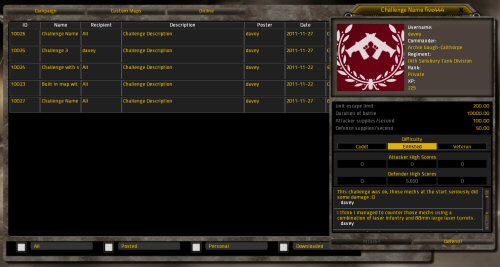 It needs prettying up, for sure, but this is the layout, and the content. Thoughts?

Soooo…. Two new things. Firstly, the GTB website has been properly re-done, although for the time being it’s light on content, that will change as I get closer to release. here it is:

http://www.gratuitoustankbattles.com/
Secondly, I did another video talking about the game, combined with some video footage showing the unit editor and map editor, which I haven’t really talked about before. Annoyingly the ‘auto-focus’ on my camera kept gurgling away, but I wasn’t aiming for an academy award this time anyway. Here it is:

As with all games, actually making it tears the design in all kinds of directions. This is one reason why people who try to get a lead designer job based on lots of paperwork and no actual game often come up against a brick wall… No game design survives contact with the code.

So… I’ve been working on the online challenges for GTB. It all now basically works, in it’s basic form. When a battle ends, you can post that battle as a challenge to the server, for everyone, or a specific user. This is only valid if the map is a new one you designed (or edited) or if you played as attacker.

The other players can now browse a challenge list, select and download your challenge map. They can they play on it as attacker or defender. This is where it gets fidgety..

If you played as attacker, and uploaded your battle as a challenge on a default (pre-built) map, and someone downloads it, it’s pointless them playing as attacker, because effectively, nothing has changed. They are just playing the normal map.

If, however, they play as defender, things happen as expected. they see YOUR units, deployed at YOUR choices of location and times, and it’s like an asynch multiplayer game. Yay!

If they edited the map, changed loads of variables and moved some props etc, and uploaded it, then it makes sense for you to play attacker OR defender, because hey, you just got a free community-based extra map to play with. Yay!

The problem is, making it clear to the player that sometimes they download a challenge and it’s only playable as defense, sometimes as either. I can use tooltips etc, and flags in the challenge database, but I still phear confusion. Plus, in an ideal world, I’d allow a player to bundle in ALL his units with a challenge too (this should be easy), so they can say “here is a normal default map, but here are my unit designs to fight against”.

I want it to all be intuitive, and although it will be awesome, so far it is NOT intuitive :(

In other news, GSB ipad is coming along. Still ironing out performance issues. Or rather, mark is. I’m just blogging about it :D

Ok, so you have be over 40 to know what the song is or who this guy is…

“In the process of authoring computer software, its standards or documentation, deprecation is a status applied to software features to indicate that they should be avoided, typically because they have been superseded”

Sounds reasonable enough but it’s a real pain. I discover today that directinput is ‘deprecated’. presumably Microsoft declared it thus, whilst also being the people who wrote it, and also writing a ton of other stuff that I’m probably not supposed to use anymore, despite the fact that when they released it, they tell everyone it’s the best thing EVER, and we are all luddites for not switching to it.

I really cannot keep up with what is right, and modern and usable and standards-compliant etc, and what is old, unsupported and unhip.

Is C# still cool? what about GDI+ did that even happen? What about DirectX Graphics? or maybe .NET? do people use Java still? and is it OK to use flash? or is it now HTML 5? and is Ruby On Rails new or old now?

I reckon a game developer needs to write at least three whole games using a technology before they really are on top of it. I’m on top of directx9 now, and feel quite confident about it, but I’m pretty sure some genius at Microsoft reckons I should be shot for not using directx 10, or is it 11 or 12 now? or is directx not even used now? How are programmers supposed to keep up? It’s fine if your job is something cushy like ‘engine architect’ where you just go to Microsoft conferences and read technical papers all day, but for people who have to ‘ship an actual product’, we actually have other stuff to do too.

Is it just me? what technology have you finally sat down to use, or ordered a book for, only to discover that all the cool hip kids (ones who never tend to ship anything) already think it’s out of date? I reckon the lifecycle of programming technology goes like this:

Gratuitous Space Battles had a fairly straightforward challenge system. You uploaded your challenge, which was a combination of unit designs + deployment + orders, with maybe a few map variable, and others downloaded and played them.

As I start proper work on uploaded stuff for GTB, I realise it’s a bit more complex and tricky. My two aims are for you to be able to:

Of course, there is immediate scope for overlap, where someone designs a new map, plays as the attacker against adaptive AI, and then wants to upload both the map, and their recording of their attacks, and units, so you get to play against new units on new maps. I want to support this (obviously) whilst not letting the UI design of it get too clunky. I’m only starting to consider the real implications now.

Another major consideration is encouragement and ease of use. I need uploading your forces to be absolutely trivial to do, and encourage everyone to do it. I also want to minimize the traffic going to and from my server…

Currently, I have an edit button for every map. You can edit the map from there, and save it out as a ‘custom’ scenario. Once you play that scenario, like any scenario, you have the option to upload it as a challenge. This feels horribly clunky.

I guess ideally, that at the end of a battle, you should be prompted to upload a challenge, and if you select yes, you can choose (where applicable) if this is a ‘map-only’ upload, or whether it also contains your unit designs and deployment timings (assuming you were the attacker).

And given the way my system currently works, with zipped uop folders, it wouldn’t make any difference anyway, People would download a map, and if it had player recordings included, they could be used, or not, entirely up to them. If no ai designs are present then the adaptive AI automatically chooses from any design (by default they are restricted to that scenarios AI designs).

I think that sounds ok.