Lots of science fiction has huge space battles in. In many ways, all that monkeying around with plot, characters and storyline is just foreplay for big fleets of impossibly large space battleships to blast away at each other and go bang.

I applaud this initiative.

And I understand, as someone making entertainment, that so much in the classic sci-fi space battle is bullshit. There are no laser sounds in space. No ship, regardless of damage ever loses its artificial gravity etc etc. This doesn’t bother me, because I’m making a not-too-serious fun battle game, so my lasers will go zap and fizz just like the rest of them.

What I’m more interested, because of the strategy nature of my game, is the actual mechanics of the battles. Take (for example) the big space battle at the start of Revenge of the Sith:

There seem to be some nice huge battleships here blasting the hell out of each other at extremely close range, and lost of tiny fighters flying around going zap zap too. The thing that interests me is the economics of it all. Why can’t side A field a fleet of 50,000 fighter/bombers instead of a nice aesthetically balanced fleet of 10 huge capital ships, 50 average ones and 200 fighters. Each of those capital ships is maybe 5,000 times the size of a one man fighter, and must cost 5,000 times as much to build.

These are the questions which currently keep me awake at night, because I’m trying to design a set of spaceship and fleet construction rules that allow you to have lots of freedom, yet still ensure you end up building a fleet of disparate size ships that look good in space battles :D.

I finally got some not-temp art in there so the ships don’t look so out of place. And I’ve got the system working so you can drag and drop spaceship modules to create new ships, which is nice 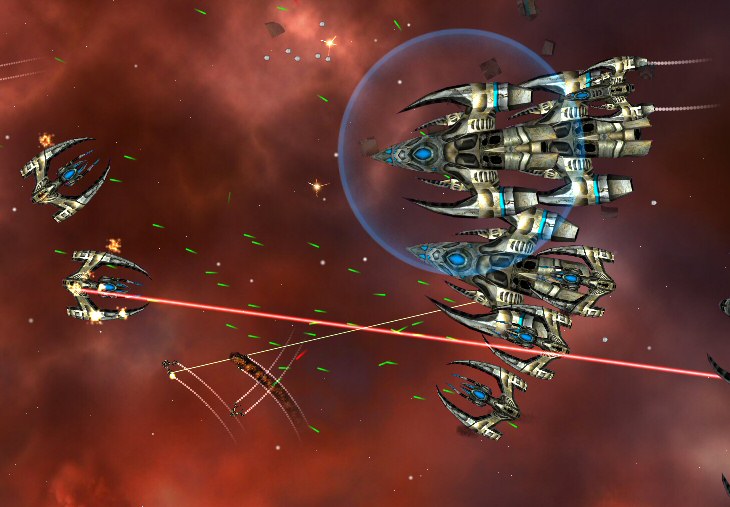 I remember watching a documentary once about how political interviewing has become less sycophantic over the years. It started with a black and white clip where the interviewer ends with this (paraphrased)

“We would like to thank you wholeheartedly minister for taking the time to talk to us today, is there any other message you would like us to broadcast to the people of britain?”

Games journalism is too often still like the former. here’s a quiote from a games preview I just read:

Journalist: Finally, is there anything else you’d like to add about [game name] or about [franchise name] in general?

Developer: [game-name] has allowed us to create a more-intimate single-player experience while greatly expanding multiplayer. We think we’ve struck a good balance that meets the needs of both audiences.

Journalist: Thanks,  Looking forward to it.

Pathetic. Why don’t they just print the guys press release verbatim and dispense with the pretence of being journalists? If you arent prepared to dig deaper into information that the GAMER might want and the developer might not be keen to reveal, then plrease go work for activisions PR department.

is your anti-3D rant cos you’re shit at it and can’t code it very well?
most of the time coders who knock 3D struggle with the maths, if that’s you just be honest and say so.

–> Actually I was top in my entire school for maths, took my maths O level* a year early and got an A, with a perfect 100% score in my mock exam, then did pure economics at the London School of Economics. I can do sums thanks

*before you were born.

clearly as you’re just a one-man-band you struggle to hold a candle to a big 3D development so you resort to knocking them.

–>Absolutely, my game plan is to try and bask in the candlelight of big 3D games, You caught me out kid.

is the expression “considered design decision” the self-important ramblings of pretentious cXXt? I think yes to all of these!

–> Maybe I am pretentious, but I’m not pointlessly abusive. I know which I’d rather be thanks…

I’m glad you get your games pirated you cXXt. The more they get seeded on torrents the better. Now fXXk off with your silly public polls and asking the public why they pirate your shit. I don’t know why anyone would want to pirate your games anyway, they’re all shit nobody’s heard of.

–> Someone REALLY needs to get laid.

Also, why do you advertize yourself as from “England” is that american friendly? Isn’t your country of origin Britain or the UK? What’s this “England” shit? You’ll be saying London, England next you prententious cXXt. fXXk off and die Cliff.

–> I was born in England. You may disagree, but judging by your ramblings, it was about twenty years before you were born, so I hardly think you have evidence to the contrary. BTW advertise is spelt with an ‘s’ here in ‘England’. Also, at least learn to spell pretentious, otherwise you look foolish.

I enjoyed that :D
EDIT: I’ve decided to post the retards later comments so people can see the shit I put up with just for trying to make indie strategy games and stop them being pirated. This is the mentality of the kiddies who are into ‘the warez community’. read and laugh. It amuses me to know none of them will ever get a decent job, because any employers with a brain cell would run a mile from employing people with such an abusive attitude combined with a sense of total entitlement for zero effort.

Enjoy *your* jobseekers allowance kiddies. My taxes pay for it. :D

Why do I make 2D games? Is it because its’s easier? or because it’s the best format for the games I make? It’s the latter and here is why.

For games that involve strategy, humans naturally think in 2D. We exist in a 3D world, but strategically, we operate in 2D. We think about our environment generally on a 2D plane.  We navigate from point to point using 2D maps. Computer operating systems work almost entirely using 2D metaphors (Have you EVER used the flip3D feature in windows vista?).

I don’t think this is surprising. We are descended from apes (creationists stop reading now), whose predators attacked us on land, not from below or above. We spend the vast majority of our time on the same level as those around us. Even if we work in multi-storey buildings, we think of each floor as a seperate 2D space. Unless you are a submarine captain or fighter pilot, your concept of 3D space is probably hugely limited. I’m sure alien worlds with super-intelligent fish and birds are natural 3D strategy gamers, but not us.

And yet some strategy games still try and force us to play them in 3D. Thankfully, most game designers have finally realised that *true* 3D is generally more trouble than it’s worth. For every gamer who embraced Descent or Homeworld as the greatest thing ever, there were hundreds who found it thoroughly confusing. It might make for great screenshots, but not for great gameplay, at least not for everyone.

Sins of a Solar Empire and Company of Heroes are great examples of games whose makers realise that 3D makes for great trailers and box shots, but lousy gaming. Company of Heroes actually restricts the camera into a pseudo-isometric fixed view, allowing you to zoom in for no adequately explored reason other than to take screenshots to show off your graphics card. Every single player of the game plays at maximum zoom, because thats the only way to have any concept of what is going on. Spinning the camera around 360 may make for great GDC trailers, but its entirely unsuitable for actually controlling an army. People lose orientation very easily. Being able to spin the world around you is great in theory. In practice, you just forget which direction is which. (If spinning the map made so much sense, army commanders would have had circular map tables :D)

3D isn’t new or exciting in 2009, It’s just another option in the toolkit. Game designers need to get over the 3D obsession and make more considered design decisions. Some genres work great in 3D, some don’t. Large scale battles work best in 2D and probably will right up until we are all commuting to work in flying cars.