Ok, so lots of people have broadband now. Yipeee. But just because I have decent bandwidth, doesn’t mean that video is always preferable to text. A lot of the time when I’m surfing, someone else is watching TV or having a conversation. I’m sat there reading the web, just like I’d read a book. Someone might even be asleep, (human or cat). In other words, in a lot of these situations sound is not desirable.

Plus I read quickly, very very quickly, and videeo rarely keeps up with the speed I want information. Because of this, again, video is inferior to text for me in the case of spoken word information.

I find TV weather reports unwatchable. minute after minute of some gormless fool waving his/her arms around and trying to ‘engage’ with the audience. Get over yourselves, you are there to tell me two things, the temperature and the chance of rain. Everything else is filler. Weather reports should be capped at 12 seconds.

Online video is obviously a great thing, but ONLY when it’s better than text. Would this blog post be better if it was a video of me sat there reading it? I doubt it, but I just wish a lot more web sites realised this. Thats my complaint of the day :D

I just agreed a contract with my first contractor to work on ‘The Space Game’. I basically trawled the internet for the best nebula photoshop tutorials, the best nebula textures for sale, and the best examples I could find of people drawing spacey nebula backdrops. I then found my preferred artist, and managed to contact them on a web message board and then later discuss budgets and artwork.

What I find interesting about the procedure is I had no idea who this artist was. As it turns out, said individual is male, in his twenties and from California. But the key thing is, I had no idea. He/she could be female, he/she could be black/hispanic/white. They could be disabled,  obese,  have any number of other characteristics, and I don’t know and likely never will.

which is exactly how it should be.

I’m employing this guy to do artwork for me, and all I care about is how good the artwork is, and how professionally they do the work. I don’t need to know anything else about them, and I think it’s in many ways a great thing for employers in general not to do so. The reason I think this, is because as more and more people get employed in this way, it’s really going to help reduce sexism, ageism, racism and all other forms of discrimination.

I once worked for a guy who said he wouldn’t have given me the job if he’s noticed during the interview I’d once had my ear pierced. he also proudly told me he’d never employ anyone black, or with a foreign sounding name. What a scumbag. As it goes, I’m average weight, male, white, and have a london accent, which means in the UK I’m probably the least discriminated person imaginable. I *did* get a lot of grief as a teenager and twentiesomething for having long hair though.

Anyway, I’m rambling now, but I just thought it worth noting that at the same time that the USA gets it’s first ever black president, there is a constant revolution going on amongst people doing ‘virtual’ work, where what color you are not only doesn’t matter, it’s’ not even information your employer will ever have unless you want them to.

That’s my thought for the day.

Uk indie developer Positech games are celebrating the inauguration of the first Black president of the USA with a special offer for one day only. A special celebration edition of the political strategy game ‘Democracy 2’ is on sale today for just $9.95 instead of the usual $24.95. This edition has the same gameplay as usual, but the political quotes in the game all come from Barack Obama, and his image is featured in the menu screens for the game.
A special web page has been set up just for today for people to download a demo of this version and buy it here:
http://www.positech.co.uk/democracy2…ter_obama.html

So what is this space game all about then?

Well it’s basically a big space battle simulator. A top-down, 2D space battle strategy game with no resource management, empire building, exploration or diplomacy.  The game is influenced by a number of things, in visual terms, I’m inspired by the stupidly big battles at the end of star trek:ds9 and the start of revenge of the sith. In game terms, it’s inspired slightly by galactic civ II, and partly by an old pen and paper RPG called traveller. 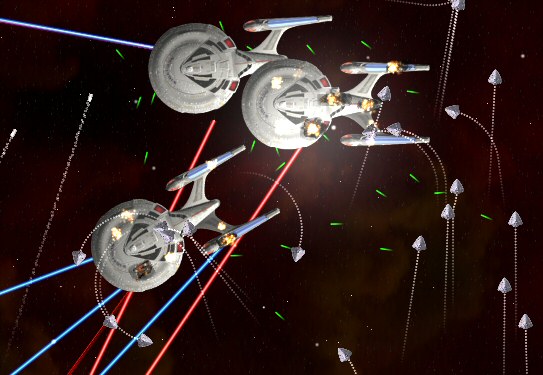 One of the books of traveller was called ‘trillion credit squadron‘, and it was based around the players being given a trillion credits to design and build a big space fleet (with certain restrcitions) to fight other players. That’s the basis of the gameplay for this currently un-named game. There will not be a big story, it’s basically a case of build a big fleet, send it into battle and enjoy the fun. I’ll be trying to make the battles look as good as 2D battles can look.

There is a lot more to the game than this, but that will come later. All my art is placeholder right now, so obviously there will be original spaceship designs. I haven’t found my spaceship artist or backdrop artists yet. In fact I haven’t started looking yet. Even now, it looks pretty cool in a big 1900×1200 window with maybe 40-50 ships a side. I hope to scale it up way way beyond that. 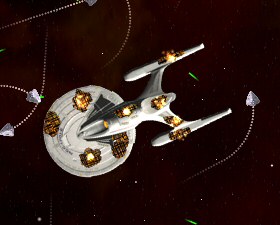