I’m trying to get towards a pre-order/beta situation, but I don’t want to rush anything. The game looks quite nice (I intend for it to look nicer,e specially the UI), and technically plays ok, but there are quite a few bugs and minor glitches right now. Here is what is currently on my immediate list to address:

So I’m pretty busy :D And this is all ignoring the graphical fluff I desperately want to find time to add to the game, plus other gameplay modes blah blah.

I’ve made good progress today and yesterday, despite distractions by Anno 1404, and being a bit ill. Here is a screen showing the new deployment layout. The UI needs polish, but this is how it looks. 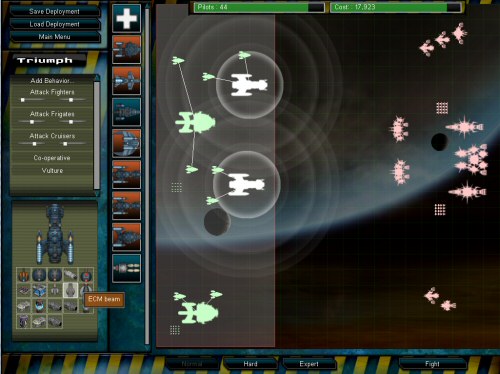 I’ve got proper selection and multiple ship AI-editing working now. This means you can drag select, or double click select (no shift-add select yet) a group of ships, and then add a new behaviour to them all (if the behavior exist, it doesn’t matter) remove a behaviour, or edit the parameters of existing ones. This means that rubbish copy+paste stuff is gone, and you can edit groups of ships as you would expect to, including selecting a whole bunch and moving them as a group. The icon with a + on it creates a new ship design in the editor. I’m aware that it looks like a health icon, and I intend to redo it… I’ll also move the ‘main menu’ button to bottom left where it clearly belongs.

Also, I’m reliably told that AI ‘behaviours’ sounds weird, and programmy. Does ‘Orders’ sound better? I suspect it does. It’s only a GUI change.

Here is a small screen of the new Deployment stuff for gratuitous space battles so people can tell me how I’m doing it all wrong :D

The fleet design screen and pre-deployment configuration screen are all gone. Now there is basically just this. The player chooses a battle to fight, and that brings them here. The difficulty setting selector will sit at the bottom once added. The strips at the top show the current fleet cost and pilot count as a fraction of the limit for this battle. A basic fleet is already shown (only for mission #1, other missions will start with an empty fleet). On the right hand side is a picker showing your current ship designs, and eventually some new icons over here will allow you to create totally new designs (launches a separate window).

How do you add new ships to the fleet or remove old ones?

Answer that in your head first, then feel free to tell me what you thought up. 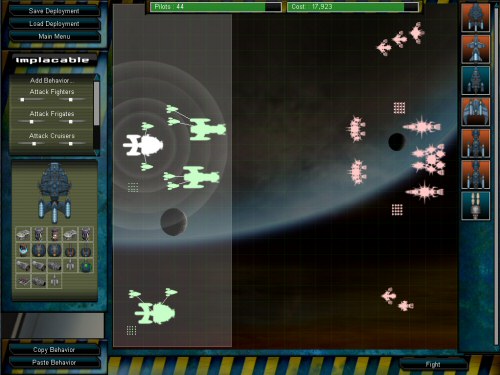 My current solution is that you basically try and drag one of those far-right icons onto the map. It turns immediately into a ship silhouette of that type, and you can place it anywhere in the deployment zone (highlighted). if you drop it anywhere else, it’s deleted. To remove an existing ship, you just drag it out of the zone.

I will also include hotkeys and maybe a right click context menu to edit a design, delete a ship, rename a ship etc. This will all be in the manual, tooltips and tutorial windows, but I hope it will also be intuitive.

Thoughts? Gaps in the UI, font choices etc, are all place-holder and will be finalised later. At the moment, It’s a case of getting the general flow of things right at last. Work-in-progress UI’s rarely look awesome!

In total, the game is going to be 4 areas:

My UI sucks. Some people who tried the game have made me realise this. The battles are cool, the idea is ok, but the flow of the UI is too complex and fiddly and crap.
The actual ‘look’ of the UI isn’t so bad, but its just a really bad ‘flow’ from ship design to fleet design to fleet deployment to combat.
it need a bit of a re-arrangement and re-think, which will be messy and annoying and not as much fun as programming new explosion effects…

Right now you need to think like a programmer to play the game. I want it to be more like someone who wants to arrange a fun space battle would think. The current system is sort of boxy and procedural like this:

This sucks. What I think I need is more like this:

With that system, there will be options to save out ship designs that you use in the battle, and to save out the deployment (or maybe I always save the deployment for each battle so I have a ‘last-used’ deployment).
The key thing would be that its all based around a single process, and a single screen. The fleet design interface will effectively be dead

Firstly, I’m declaring GSB is at a very early alpha, and I’m currently putting together a build for some people I know to take a look at. This isn’t an open beta or pre-order yet, that;’s a while off. The music isn’t even done yet, so be patient :D. This is quite a milestone tor each though.

Secondly, I decided against firing arcs. I thought about it all morning, typed up all the pros and cons. I can see the pros, but he cons are a combination of aesthetics, AI issues, and complexity. GSB is not meant to be as hardcore as Starfleet command, so I’m wary of overcomplicating it. Also, firing arcs would mean an order of magnitude more decisions for the Ai commanders of each ship. Also, it would mean that the ships were constantly banking from one angle to another to get shots in. I prefer the look of the Revenge of the Sith or Return of the jedi style battles, with big, almost stationary cruisers blasting away at each other. Feel free to change my mind though.

Thirdly, I added this sort of warp-effect intro thing to each battle. The camera pans across your fleet as they arrive on scene. Video below: (as you can see some battles have BIG fleets. Are you SURE you want more complexity per-ship? L:D)