I’ll be away for a few days over new year so will not be blogging. So this is the last opportunity to sum up what happened in Positech Land during 2008.

What I failed to do:

All in all, 2008 was a pretty good year. Kudos 2 was fun to make, and I’ve kept the business afloat despite the casual games ‘boom’ narrowing to just remakes of about 3 different games, and the global financial meltdown.

Bottom line is, I’m still here, still making indie games for the PC, not shabby console ports based on movie tie-ins, and there are free demos, mod-support and no DRM.

Modding doesn’t seem to be living up to it’s full potential.

Developers and publishers make a game, and release an SDK and mod tools so that ordinary games players can come together and make changes and improvements to the game. This is awesome, and one of the best things about PC gaming, but there are two drawbacks.

1) Most mods are unfinished and suck

2) The publisher and developer are basically using modding as a marketing tool, and nothing more. they gain nothing from a virbrant mod scene and decent mods other than goodwill from gamers and an increased perceived worth of the game. (not to be sneezed at, but not massive either)

In other words, the incentive to encourage production of great mods is low. Modders do it for fun, and maybe for their CV if they are insane enough to want to get into games. Develoeprs support it as an afterthought if they have the time. Why can’t we go further and have a financial releationship as an option?

Modders get the rights to release paid for mods to the game, with technical support and QA from the developer. The gamers buy this mod, and the money is split between the mod team and the developer.

Would this work? is it a good or bad idea? I’m not saying mods shouldn’t be free, just that with financial incentives, some mods could be much better. In principle, I’m in favour of people doing high quality mods for my games, and selling them for a profit split with me. Would this work? is it fair? is it evil?

Game design is a pain. But ORIGINAL CONCEPT game design is like a pain intensified with pain amplifiers set to MAXIMUM_PAIN.

90% of games have very little originality. Some of them have some original ideas or twist ion existing concepts, and very few of them are totally utterly new. The Sims was a reworking of little computer people, and Kudos is in some ways a new take on the Sims, albeit different in fundamental ways. Democracy is a bit of a weird one, being influenced mainly by neural networks and watching TV debates over politics, but it probably looks like some other game to someone. I’ve heard talk of ‘shadow president’ but never seen or played it.

The last 3 games I did were Kudos 2 Democracy 2 and Kudos:Rock Legend. These are all games I worked hard on and am very proud of. D2 and K2 are my fave games, and I think they are the best I’ve done so far. But the last time I released a totally ‘new’ game was the original Kudos.

I’m determined not to coast on past successes, so this new game is totally different. I’m trying to carve out a new idea for a game again, and it’s a pretty tough job. The problem this time is technical, not conceptual. I can see the game in my mind, how it plays and how it works. Translating it into code is tricky. There is a lot of conventional AI to code (unit AI, as you might get to some extent in an RTS), and that stuff is a pain to get working consistently at reasonable speeds, especially with the pretty big number of units I’m hoping to support.

So this next game will take a while, hopefully getting done before the money runs out. But it will be pretty origianl (I think). That will give me 3 strings to my gaming bow (kudos, Democracy and NewGame). On the positive front, it’s also got me coding more hours than ever before, because I hate it when the game looks like it’s a mess…

I haven’t played the guitar for ages, and just picked it up and hammered out a few notes. I find doing so very frustrating these days. Years ago, I could easily practice up to 12 hours a day, but the guitar is like weight lifting, you need to keep doing it to stay up to a certain standard, a little each day (or a lot). 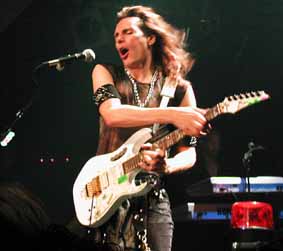 The thing that I find most frustrating is the lack of precision. I used to spend hours playing through the simplest scales, making sure each note was perfect, that there was no handling noise or slurs, and that every note sounded clearly and precisely. It’s important to practice really slowly and cleanly with a metronome if you want to play fast, because the slightest imperfection when you speed stuff up and it just sounds like a mush.

Life is much easier on the piano. you can’t accidentally apply some vibrato or a bend, and it’s very hard to actually miss a note as there is no bending involved. You don’t need two hands synchronised to play a single note.

But C++ is right up the other end. The code is either correct and works, or it doesn’t. Better still, I can step through the code and even step backwards through a frame render and see exactly what I did, when and how it went wrong. There is no fuzziness, ambiguity or degrees of perfection. The code works or it does not work. Its binary, not analogue.

Somehow, I’ve become inteolerant of analog stuff where you can screw up ‘a bit’. I find it frustarting and I’m never happy with what I’ve done. Years of playing thr guitar and working with wood have probably taken their toll on my ability to perform analogue tasks. Binary FTW!

People keep talking about micro-transactions and paid items on online games, but they are 100% focused on MMo games and nothing else.

I’d love to have a few extra units for company of heroes. $10 for 2 new russian tanks and a few new infantry units? Go for it, my fingers are poised over the buy button. I wish I had a single mass-market game that supported that kind of stuff, because I’d love to be able to release ongoing expansions for stuff like Kudos and Democracy. The thing is, such expansion content is 99% fixed costs, and it’s just not financially viable. Maybe the next game it will be.

The problem will always be transaction costs. I’d happily release some new policies for democracy 2 for $0.20 each, but it would cost treble that in credit card processing costs. We need someone like google or amazon to set up a mass market, one-click economic micro-transactions scheme. Great things are ahead when such a system is in place.