I spent today mostly working on campaign stuff. One of the features in the campaign game is that player-designed fleet deployments show up as rival fleets in the campaign. So rather than just facing a fleet designed by me, and always the same, in a given battle, it’s a fleet someone else designed. Another GSB player.
As I play-test this, I find it really cool. I have no idea what each enemy fleet will look like until they appear, and it seems somehow ‘more exciting’ than the idea that its AI-designed, or a fixed fleet designed by me.

Why is this? And is this just me?

Playing against other people is often described by PC gamers as way better than playing against the AI. When you ask people why this is, there are a lot of reasonable explanations about humans being better at adaptive strategy, more creative, and with the ability to actually suprise or confuse the player. Certainly this is true of most RTS games and FPS opponents, at least currently.

I do wonder though, on how we will feel in five or ten years time when AI is that much better. There is nothing to stop AI analyzing every RTS or FPS players movements, and ‘evolving’ play strategies that mimic real human players much more accurately. In twenty years time do we really think that we will be able to tell if our RTS opponent is AI or Human? Assuming we don’t, will we *still* get an inexplicable buzz of excitement knowing it’s another squishy human rather than some clever AI?

I really think we will. There is something very primitivly rewarding about pitting yourself against (or co-operating with) a fellow human. We can’t speculate much about the motives or emotions of some AI, but the thought that there is someone, somewhere who just got their fleet pulverised by ours is just somehow much more rewarding. Blowing up AI pirates in eve is kinda fun, but blowing up other players who then have LOST their ship, is awesome, albeit a bit cruel. What do you think? Do you think it makes a difference if you are directly, or indirectly (think spore) playing against real human beings? 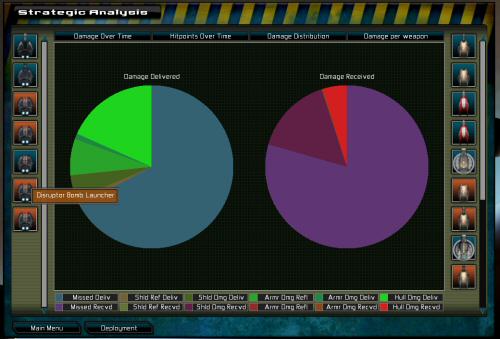 I’ve added filtering by module type too, with the pie charts that show the damage done. This isn’t also filterable by ship, so it isn’t totally uber, but sod it, this is a game, not excel, it has to end somewhere :D

What this new view lets you do, is (for example) select just your frigate plasma torpedoes and see that actually 95% of their shots missed, whereas only 35% of the cruisers torps missed. That might be a good thing to know…

Hopefully tomorrow I can spend a lot of time tweaking the UI for this, and testing it extensively. At some point I need to declare the stats upgrade done, so I can concentrate on play balancing for a few days. Then after that it’s back to the long discussed and hugely involved online thingy.

I’m currently balancing a bunch of stuff. here are my short term plans and current work:

2) Re-balancing of some of the more useless hulls and modules to make them more usable (bundled in with the stats patch, most likely)

3) Another race expansion for GSB at some point ( a paid DLC thing again).

Here is the second view of the stats stuff. Pie charts FTW! I haven’t done any funky highlighting for them yet. This is basically the same data as the view over time, but aggregated as a pie chart. What this means is you can still filter it at both axes by changing which categories of damage to include (ignore all missed shots, for example), or changing which ships to analyze. In theory if you wanted to know what percentage of shots from The Millenium Python penetrated the shields of the USS Dubious, you can just click some optiosn and see that right away.

Click to enlarge, feedback most welcome. I’m going to investigate doing a graph of total hitpoints voer time as well, because that should be relatively easy now. 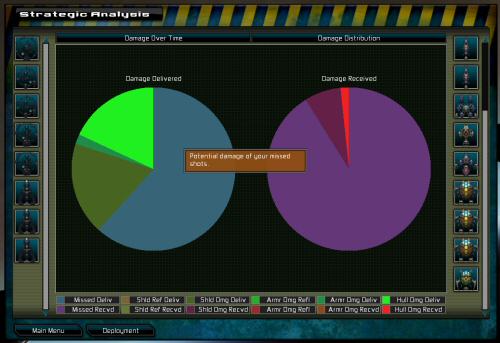 Or I might do some silly chart animations first :D

Right, so I’ve got totally distracted from my online-enabled metagame cleverness to improve the dowdy old stats screen for GSB, which we can all agree sucks right? Anyway, here is my current flimsy work in progress: (click to enlarge) 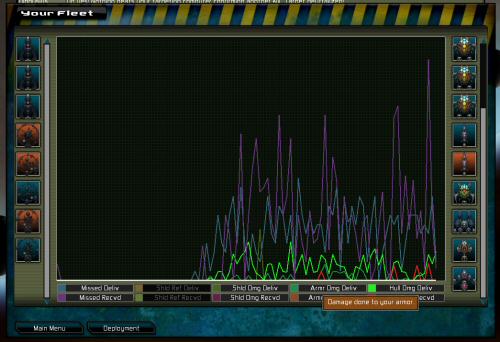 So an explanation of whats going on:

The graph shows  the damage done by every shot fired in the game, broken down into ten categories, which are missed, reflected by shields, damage to shields, damage to armor, hull damage, for both damage delivered (to the enemy) and received (from the enemy). The UI lets you toggle any of those categories on or off with a mouse click. Added to this, there are ship-pickers in two columns, with your fleet on the left, and the enemy on the right. By default all are enabled, but you can toggle each ship/squadron on or off. If you toggle them off, they get eliminated from the graph, which also auto-scales the Y axis to show things in better detail.

I’ve just realised I totally missed out damage ‘reflected’ by armor. I must add two new categories… bit of a squeeze now.

This isn’t the final screen, there is lots of minor UI tweaking to do, and it will have a more relevant title, plus I’d like to add options to view pie charts and other bits and pieces. Ideally I’d add little tags you could mouseover for events such as cruisers being destroyed, to put the charts in context. What I’m after is first impressions and feedback. Do you think that this is already an improvement on the old screen? I do, but I’ve spent 2 days on it so I’m biased :D.

My current plan is for this to just be in a patch, no add-ons needed. I am planning on a third new race expansion for the game at some point, because they seem popular and I love seeing new spaceships in the game :D.

Are you a stats junkie? I reckon that many gamers are, and given how popular games like Fantasy Football can be, I assume that there is a lot of scope for stats-junkie games. One of my original visions for Gratuitous Space Battles was WAY more stats-junkie than it currently is. I kind of let the side down a bit when I did the post-battle stats screen. If I could justify it, I’d like to work on that some more.

In my minds eye, the post-battle screen is like google analytics, but for space battles. You would be able to view the data in all sorts of different ways. A pie chart of which ships dealt the most damage? A bar chart showing the damage done by each weapon type. A line graph showing total damage inflicted over time, and showing hit points remaining on each side over time…

The only slight niggle in my mind is that if you make that stuff *too* good, then the people who will mico-manage and analyze every last weapons turret will have an even bigger advantage over the more casual player who just slaps on a few laser turrets and enjoys the show. In a sense, I don’t care about that, because the game is designed to be predominantly a single player game and sandbox, rather than highly competitive. Also, I’d imagine that all data is vastly open to interpretation, otherwise my obsessive poring over google analytics stats would have made me a dotcom billionaire by now. Still, if it takes being like this or this to be rich, I’ll stay poor.

Anyway, stats junkies? are you out there?