It’s actually quite easy to overlay colored re-skins onto some of the models in GSB. I might have to do a tutorial and release some of the photoshop files required. I found just slinging a camoflage texture onto the Imperial Centurion cruiser looked quite cool: (click to enlarge) 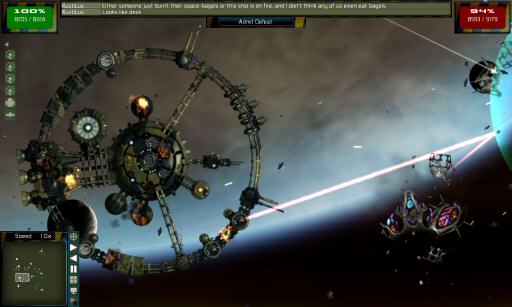 It’s non trivial, because you need to re-composite all the damage texture stuff together, and it’s not done in game on the fly (sadly), so you need to save out new damage, hulk and sprite textures for any color variation.
Still… it points to future (sequel?) possibilities, as well as the potential for some cool mods. I envisage a fleet of breakway ‘seperatist’ ships that differ only in their coloring. or maybe a MK II coloring for each ship. As well as being kinda fun, I think it would be nice to have different texture options for ships so that you can tell apart 2 different configrued ships without staring at the turrets. I would ultimately love a ship texture customiser / chooser / painter thingy.

For now, I’m just stroking my stubble and thinking about the possibilities…

Ok, so new orders are something people often campaign for, and I like the idea of a ‘stay in attack formation” style order for fighters. So today, I went to implement that, and opened an entire canning-factory full of nematodes. I ended up re-writing the AI a bit so there is a definite concept of a fighter squadron (which I’d got by without, until now). The code gets involved, because each squadron needs a leader it can follow, and that leader needs to be re-elected in the case of the leader getting blown up, its engines shot down, caught in a tractor beam or limpet-mined. I need to test all of that works… Also I need code to assign slots in a general formation to each fighter, so they don’t bunch up too much, and look l33t when flying long distances,

I also needed to handle combinations of orders like ‘stick together’ and ‘formation’. I think they *do* need to work together, so you can have a fighter squadron sitting in formation at the rear, set to attack effectively only when their parent ship is destroyed, at which point they will then still stick together.

Of course, the big question is “is it best for the fighters to always stick together?” I suspect not, I suspect it depends if you want a bunch of general purpose dogfighters, or a coherent strike force. I like to think it’s a fine balanced decision, but only real life game testing and the eyes of a thousand GSB experts will tell. Here is a video showing how it’s looking right now:

I should probably add some suitable ‘stay in formation perkins!’ comms chatter too…

I’ve been fixing some minor bugs and issues today, and doing some businessy stuff I won’t bore you with. I’ve also been tuidying up the challenge list screen, given the new fangled details window. It now looks like this (click to enlarge) 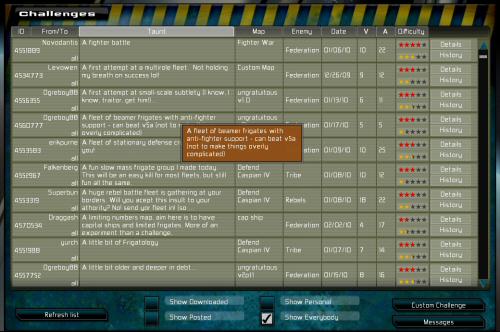 Basically the details button replaces the old download and delete ones, the history button has moved, and there is a new column showing a challenge’s unique ID, and allowing you to sort by it, handy for finding a specific challenge if you know it’s ID, which I hope will be of use for forum discussions etc.

This isn’t finished yet, so this is just a work in progress screenshot, click it to enlarge… 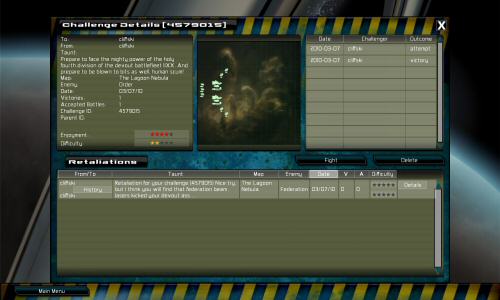 This is new challenge UI stuff. I got sick of squeezing more columns in 1024 res on the list view, so now those download and delete buttons get replaced by ‘details’ which opens this new screen for a selected challenge. All the old data is here, with room for some more, and the history of that challenge is now auto-downloaded and displayed here at the top right. You can also now see the challenge ID in the titlebar, (I’ll probably add that to the list somehow too). there are two super-exciting new things:

My plan for this is that

I still have more tweaks, and a ton of testing to do, to make this work well. I’m hoping the next patch will really improve the online stuff. Ideas and feedback are most welcome, as ever.

Yes, so Ubisoft put very tough, over-the-top DRM on Silent Hunter V. Its not exactly news. And some people say it’s cracked (I suspect not fully) and other disagree. Yada yada.

I don’t know whether the DRM was a mistake or not. And frankly, neither do you. There is only one person in the world who knows, and that’s ubisofts accountant. They used DRM because they thought doing so would make them more money. My own investigations suggest that it won’t, but their audience is not my audience. their budget is not my budget, and only they can see their figures. It may well make sense for them. Sure, a lot of ANGRY INTERNET MEN will post in 400+ comment threads about how they were ‘ass-raped by the stalinist scumbags’ at ubisoft, but 400 people are a drop in the ocean when it comes to the market size for AAA games.
Anyway…
The reason they did this is because piracy on the PC is a big problem. For EVERYONE. Gamers and developers alike. Just before posting this, I typed ‘gratuitous space battles’ into google, and saw two of the most popular searches are for ‘torrent’ and ‘rapidshare’. Thanks guys, you are the reason DRM exists. May I recommend the free demo?
Pirating COD 4 makes more sense than pirating a submarine sim. How many other sub sims are there if ubisoft throw their hands in the air and kill the franchise?

Anyway…
I may not know if the DRM was a mistake, but I’m pretty sure they made another one. A big one. 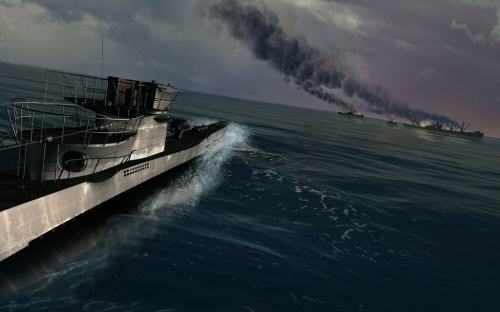 I am 40 years old. I am a hardcore gamer. I have some disposable income. I’ve read about the silent hunter games for years but not bought one yet. I’ve watched a youtube video that makes the game look cool. I am a world war II nut, who recently read churchills account of the war in the atlantic…

I AM DEFINITELY IN THE TARGET MARKET FOR SILENT HUNTER.

And yet I haven’t bought the game yet. Why?
Not the DRM, I’m online all the time, don’t resell my games as a rule, and don’t get too annoyed by it. Why then?
There is no demo

How the fuck do ubisoft think I’m going to know if I’ll like the game when…
1) All discussion of the game online is polluted by arguments about DRM and
2) There is no way to demo the game.