Ok so here we go, It’s finally ready for release. Hopefully all will go smoothly! Here is the new DLC for GSB:

THE ORDER are a group of aliens who take their beliefs very seriously. Their holy book may have been written when The Order had spears and lived in mud huts, but they cling to the letter of the book even now, ten thousand years later. And you no what isn’t in the holy book? That’s right… YOU.

And the order interpret this the way every rational life-form would. That you are heathen aliens who must be destroyed in the name of ‘The One True God’.  They tried Hymns, then they tried leaflets, but now they are trying nuclear missiles, radiation guns and limpet mines. Stand aside heathen alien scum.

The order have three new weapons. Radiation guns, firing radioactive bullets which infect your ship and do damage long after the impact (cue nice green glowy effect), Nuclear Missiles, which are a similar effect in missile form, and limpet mines, which are like remote controlled drones which stick to enemy fighters and drag them, down to speeds where anyone can hit them. They also have faster firing cruiser rockets called ‘firefly’ rockets. In terms of ship bonuses’ they are big on power, low on speed.

So… I did patch 1.34, which had a bunch of minor stuff that was fairly urgent, and immediately everything went wrong. I’ve  moved to Windows 7 on 64 bit, and that meant a new PC, and thus nothing worked. I needed to install the Microsoft Directx sdk, which is fine, but the old version I used would not install on W7. That meant getting the new version, which took 2 days to download (grrr), but installed, so I could actually debug my games again….

But it also meant that when I recompiled the game for a patch, it got automatically tied to the latest d3dx dll, which is weird because I havent changed any graphics engine code at all. It seems Microsoft defaults to requiring the latest of everything. Cheers guys.

And here it gets annoying. Because the machines I test on all have the SDK installed, I had no idea that I was suddenly needing a new (not normally installed) DLL until I released the patch and got complaints. Eeek!. I’m 99.99% sure this is fixed now with 1.35. I couldnt get the stupid-ass directx redist installer to actually install the new files, so I just recompiled the game forcing it to use includes and libs from the older SDK.

In other news the ‘spot the feature’ is that missile trails are going above the ship that fired them. They never used to do that. Nobody even notices when I point it out. Bah. Also, multiple-rockets now split apart in a more convincing way now, and tons of really minor stuff is now fixed. Hurrah!

It’s very minor. But what have I changed in this screenshot below? 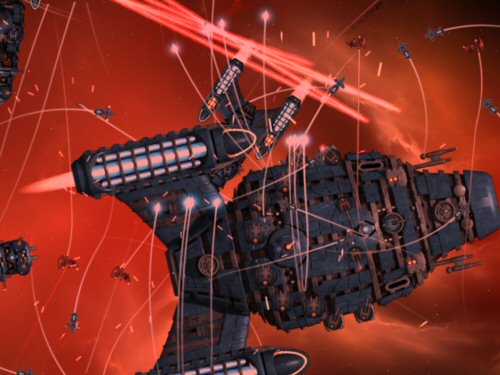 I’m supposed to be finalizing the new expansion. I’ll do more work on that tomorrow, but I’ve resigned myself to one more patch before I release it. I needed more weapon variety for them, and that meant code changes to the main game. Then I suddenly got a bit manic and obsessed about improving the graphics in all ways. Hence, 2 days were wasted trying to add shadows (I tried various methods but none of them look right, not without re-rendering every existing ship and a major re-write) and then a decent bloom effect. In the end, I junked all that code, because it didn’t get me anywhere.  I’ve made 3 tiny changes today to some stuff which make the game look very slightly better. Overall, it all adds up methinks….

So…. for the past few days I’ve been distracted by various things. The largest distraction was the arrival of my new PC. Hurrah! First one in three years. I can now check everything under Windows 7, 64 bit with ATI, which were the three missing links in my compatibility testing.

Of course installing a new PC means NOTHING works. It means working out why perforce won’t set its environment variables on Windows 7. It means remembering where the hell I put my precious Office 97 install CD (I refuse to pay money to upgrade ms office when office 97 does everything I need :D). And it means working out how to re-cable part of the house so that I can move the router into the office.

But now it all works! and I am back in action working on actual work stuff. For the rest of today and tomorrow I will be playtesting the new GSB expansion pack. Expect screenshots shortly before release, hopefully mid-week. Everything seems bug free, it’s just a matter of play-balancing now. Phew!

Oh and I’ve been building a log store to store the wood that keeps our house less-cold: 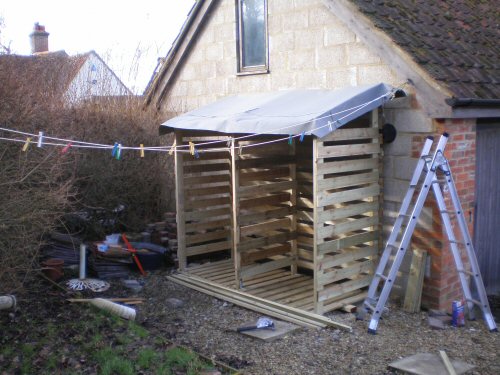 Hello ubisoft, how are you? It appears from this:

That you are making DRM in your new game (Assassins creed 2) even more inconvenient for paying customers than before. Apparently if your net connection drops slightly, you will get kicked out of the game.

This is madness. Have you not heard that DRM is actually unpopular with paying customers? As a gesture of goodwill, I offer you the most exhaustive consultation on the causes of piracy ever done.

The conclusion is that DRM == net loss in terms of sales. Maybe one day there is flawless, transparent DRM, but that day is not today, and this is not it.

I am not some pirate at slashdot or digg telling you this, but a game developer who makes his living from copyright, and who strongly, passionately, fiercely opposes and hates piracy. DRM like this does not work, and it’s silly to keep using it. Please do not do this to PC gamers.