I went to buy something online today, for about £90. I did a google search and found the cheapest one, and went to the shopping basket to buy…. and then hit a warning saying that the security certificate was issued by an unknown company.

I then stopped. The site didn’t look dodgy, it was still an https connection, it was a boat chandlery store (I was buying an ecofan), it wasn’t selling viagra or heroin. I suspect it was fine, and safe, and the certificate thingy just expired or somesuch.

In the end, I paid an extra £5, and bought it on ebay. I therefore can state, that in my mind, a warning-free buy page from a vendor I have already purchased from, is worth at least £5 to me. (or is it 5% of the purchase?)

We all make decisions like this a lot, and I find the process to be fascinating. I often catch myself making irrational purchasing decisions. Here’s a famous example of what people do:

You go to buy a TV for £200. Just before you hand over your money, someone tells you the same TV is £195 in a store thats a 2 minute drive away. Do you drive to the other store? Most people say no.

You go to buy a book for £6. Just before you hand over your money, someone tells you the book is only £1 in a store thats a 2 minute drive away. Do you drive to the other store? Most people say yes.

Which is bullshit. It’s either worth £5 to you to drive for 2 minutes or it isn’t. This makes no rational economic sense.

We are easily tricked into spending money on stuff that makes no sense. The phrase 90% OFF! will trigger a completely irrational number of sales. The phrase “90% OFF ONLY TODAY!” sells even more. Logically, we should not give a damn what the original price is, or what it will be tomorrow. We should just look at what the product is, and what it is worth to us. But almost all the time, we are manipulated into making irrational purchase decisions.

The worst, most emotional, most irrational purchasing decision I made, was to buy a high spec sony vaio metallic finish laptop which I’m typing this on. It is an overpriced, over-heating and over-specced luxury toy that cost me too much money. I bought it out of pure lust, totally irrationally, about 2 years ago. What’s the most irrational purchase you have made?

I found this really annoying when playtesting the campaign, and I know people have asked for it before. I want to know if this is an improvement, before I release it in a patch. People were getting vexed because they often had 5 or 6 or 20 cruiser designs of the same race (for example) and the silhouette icons were no help in picking them, so they have to use mouseover tooltips to pick the right one, which is slow. So i have experimented with adding the (cropped) name of the design to the UI: (Please click to enlarge) 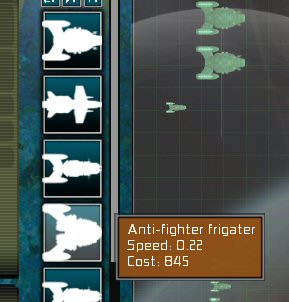 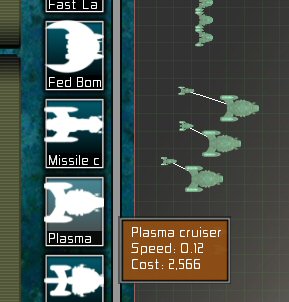 If you play GSB a lot, you might think “yes, I need this!”, but I’d like to know if you think it looks a bit cluttered, or messy, from the point of view of someone just trying the demo for the first time.

Edit: I tried it with a smaller font. Better? or too small? 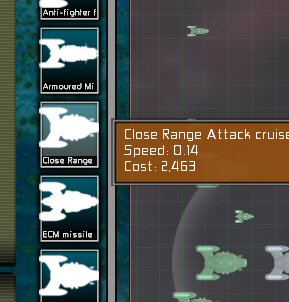 I’m aiming, at some point, to get some solar panels installed on my house. This may sound like some middle class hippy luxury, but nay! it is not so. The last UK government spent 12 years ignoring the environment and hoping it would go away, then flipped out and introduced a feed-in-tariff that makes micro-generation a no-brainer. 41.3p per unit of generated power, whether you use it or not. It only costs 11p to actually buy power at peak time, so I assume the civil servant responsible was just drunk. There again, they don’t tend to care how they spend our money.

Basically, even if you are Karl Rove, or the chairman of Exxon and think Climate Change is a fairy story, you would still be insane if you had a south facing roof and you didn’t install solar panels on it. Even if you had to borrow the money, it can make financial sense (because the payback is likely to be higher than the loan interest). As it happens, I am a big fan of renewable energy and have lusted after the idea of solar PV for probably 10 years now. Anyway… I *do* have a south facing roof, so it should be a no brainer right?
WRONG!

Firstly, I live in a ‘listed building‘ which means I have to bake cakes and make tea for the local planning consent officer (who is younger than me! FFS!) and beg and grovel for permission to do this. Secondly, The south facing roof is great, but its made out of corrugated metal (really!) and we aren’t sure it would support the weight. Cue structural survey for £200. Bah…

Thirdly, we have a rather huge, and impressive oak tree in the garden. A garden that slopes south and upwards, so that the tip of the tree just shades part of the potential panels. For boring reasons, even minor shading on solar is an efficiency disaster. We *do* have 4 (I counted them) other locations where the panels could go, as there is a garage, blah blah. And after 3 days of taking photos every 2 hours (when there was some sun…) and lots of staring at them, I concluded that only 1 of them is really a viable site (metal roof ville). So I’m finally at the point where I’ve booked a strcutural survey to turn up and check the roof.

If the guy tells me it won’t support the panels, I’m going to stab him with my D’k-tagh and invoke the vengeance of kahless on the world…

(I’m playtesting the campaign game. It has ship maintenance costs in now, and is getting more and more stable.)

I used to publish games sales stats years ago, but haven’t for an age. I thought given its 3 years old, it might be interesting to look at the sales stats for Kudos: Rock Legend. KRL is a sim/management game based loosely around my experiences of being in a garage band. You choose members of a rock band through auditions, put together the songs, buy the equipment, book the gigs, and basically try and go from the garage to the stadium. It’s a 2D sim game I released in 2007, and I sold it both direct, and through some casual portals. The game was not a hit, but it wasn’t a disaster either.

The costs involved in the game were not huge, roughly $3,000, which is peanuts by game production standards, and it’s even pretty darned low by modern positech standards (GSB cost way way way more than that :D). Obviously, that doesn’t include my time, or marketing expenses, and the game took about 6 months fulltime in direct development, plus quite a bit of time post-release to promote and sell it. 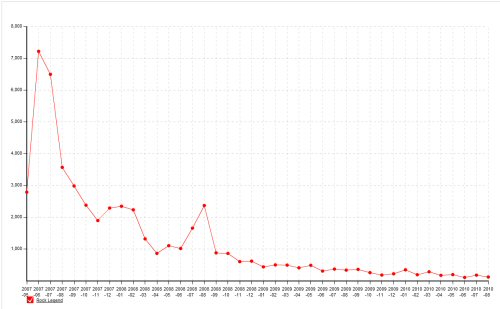 The total income from the game is $51,174.43. That probably sounds pretty good. I’m sure peoples immediate response is “$50k for 6 months is $100k a year! But it is not so. Deduct the $3k, then deduct at least another $3k marketing/ads. Now deduct roughly 10% for payment processing and bandwidth. Now another 20% in corporate tax. That’s… less. Don’t forget the post-sales means it’s more than 6 months anyway.

But the good news is that long tail. Looky at the far right. The game continues to sell a few copies each month. If you have 10 games like that, then you are making a living (not an awesome one, but not a bread-and-water one either). KRL is not a whizz bang 3D game, so it doesn’t age quite as badly as most games will. I suspect in another years time it will still be earning 60-70% of what it does now.

KRL is not a huge ambitious mega-project like GSB. A single dedicated coder can do a game like that in a reasonable length of time. If you want to know what it’s like, try the demo.

And to anticipate some questions:

Yes, it is in retail in russia, I recall that making a few thousand dollars. It also made a few thousand on the casual game portals, although my cut is tiny.

The game is not on steam, they have only accepted one of my games (GSB). It is on sale through impulse, but doesn’t sell hugely there. I’d say how much, but their reporting is down right now :(

I was reading some comments by a would-be indie developer today, lamenting the amount of knowledge that is required to be an ‘all-rounder’, and thus to be a solo game developer. It *is* an insane amount of work. You need to know web design, PR, accountancy, marketing, advertising, game design, programming, and probably a dozen other things, even if (like me) you contract out art and sound.

There are a number of ways to approach this, but one of the best is to be focusd. to only do one thing at a time. To avoid distractions. if you are trying to develop games from home, alone, but you have MSN, Skype and a web browser open all day, you probably aren’t focused on the task at hand.

As a hobby, I attempt archery. I’m not very good at it, but it’s very useful. Archery teaches me to stand up straight, focus on a distant object, and get some exericse, all of which my job lacks. In addition, archery is all about focus. When I’m distracted, I shoot badly. One of the main aims in recurve archery is to be absolutely totally and utterly motionless at the point where you release the string. Your body must not move (which it wants to) at the point of release. How good can people get at this? See below. Keep watching, it’s not a photo. Watch the bow string move. Are you this focused?