I was going a bit square-eyed from all this coding so I took the morning off (I’m coding again now!). To get away from all the explosions and guns and weapons of GSB, I had a relaxing morning at THE IMPERIAL WAR MUSEUM. Which is in London, and not *that* much of a trip. I’ve been reading churchills war diaries and playing company of heroes, so what the hell eh?
I conclude from my trip that the V2 rocket is HUGE, and that those PAK anti-tank guns from company of heroes are actually quite small. I also conclude that evil though they were (The holocaust museum makes that perfectly clear), the Nazis had some cool tank designs. Here is me stood nonchalantly next to the jagdpanther at the museum: 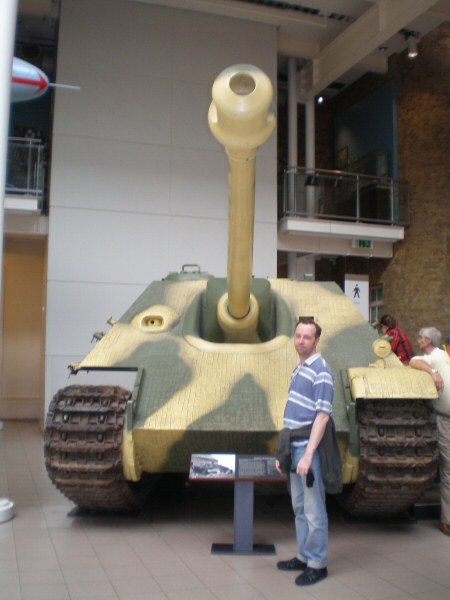 I’m working on AI behavior code. Fortunately I think I may have solved a big of a horrid fighter+escort+engage enemy bug whilst I was on the train, so I’m coding it now. If it all works, I might release a 1.05 patch tonight, mroe likely tomorrow, after some proper testing.

11 thoughts on Spot That Tank