They have put that video on-line about piracy for which they came to my humble abode and interviewed me. It’s quite short, and I lose track of what I said, because they dubbed over it hilariously in Spanish, but there it is: 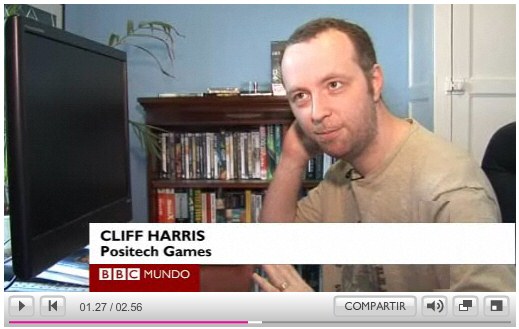 I look much taller on TV. Actually I don’t, I look like a typical sad dork in his bedroom playing video games, and it’s one of the few times I get to see just how little hair I have left, but thats showbiz I guess. On a slightly more relevant note, theres about 1.25 seconds of me playing GSB, albeit with some horrid debug GUI and a placeholder splash screen. I think they dubbed some tacky dance music over it too, as the music isn’t in yet.

If you are like me, you will be suprised to hear someones voice who you have read things by but never heard. I think subconciously we all assume people whose voices we don’t know sound like us. It must be said, than in real-life, I’m not quite so spanish :D

8 thoughts on It’s like BBC, but with me on it