Production Line updated to 1.61 on the steam ‘unstable’ build

Lots of cool stuff in this update to Production Line, which will get further checks, tweaks and balancing before I roll it out to the main Early Access steam branch, GoG and Humble widget customers. Here is a list of all the features, and notes on the biggies:

This was widely requested, and I kept putting it off because I felt that it would lead to an unbalancing in the games difficulty, but actually now I’ve tested it for a while I think I’ve got it about right and am glad its in there. 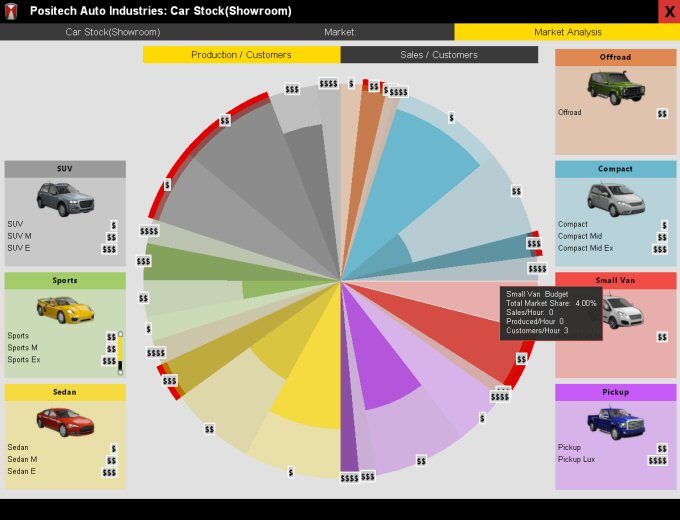 I find this new screen really helpful when playing the game towards the later stages when there is a lot to keep an eye on. I worry its not immediately obvious how it works, but I do think its a usability improvement for managing supply and demand.

To make it obvious some cars are tesla-level expensive, and some are more Ford Ka level… :D

Amazing we went so far without these, as they are getting so common now. Also handy to be able to add a new feature without requiring yet another resource as ‘sensor’ is already in there. Plus it gives some much needed upgrades to the bumper slots.

11) [GUI] Revamp of the ‘apply options’ screen post-research, which adds price category indicators and selective coloring, and new buttons to apply a feature to a whole category at once. 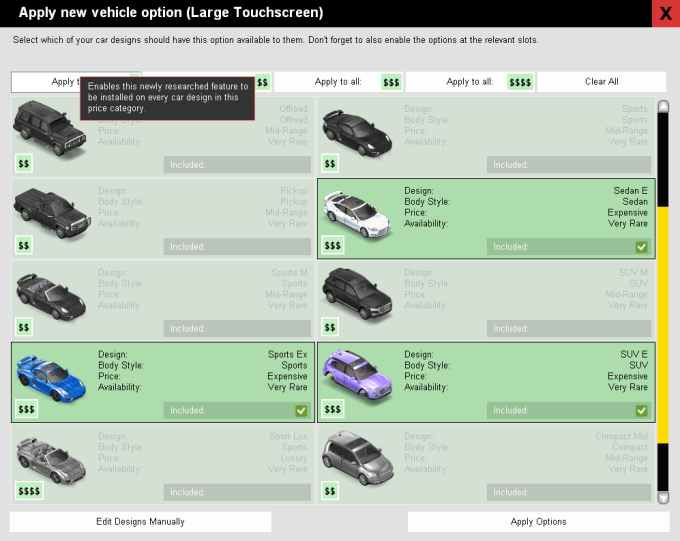 This makes things much quicker when you have 20+ designs, and you don’t really want to make a more nuanced decision other than ‘add this new widget to my expensive ranges’.

12) [GUI] Music and cruise control are now feature-categories, where the more expensive versions include the resources, value and features of the cheaper ones.
13) [Content] Self-driving! new researchable tech, new resources and feature category for high-end cars.

This is very late-game stuff and requires quite a bit of research, but then you should have expended your factory enough to have a good dozen or two dozen research facilities at this point.

14) [Balance] Boosted the impact on marketing campaigns on showroom visits by 25% to increase total market size possible with current campaigns.
15) [Bug] Fixed bug where sometimes the warning on the design screen about common or universal features missing would be skipped if the feature had a category.
16) [Bug] Fixed bug where changing the color of a car design could lead to duplicating the price slider GUI.
17) [Bug] Fixed bug where the correct price-category adjusted market value of a feature was not being displayed in a number of places.
18) [GUI] Double clicking a car in the showroom now launches the vehicle design screen for that car’s design.
19) [Content] New researchable vehicle body style -> The small van.

I’m so pleased we got this in. Its likely the last new body style,  and its a really cool one :D

Feedback on this new update is very welcome, and of course any bug reports for things I have no doubt stupidly managed to break with this patch…