GSB recently got a shield support beam. This was a groovy empire-frigate-only weapon which remotely boosted the shield power of friendly ships. It was criticised as being too powerful. Not surprisingly, people experimented with minimal cruiser fleets boosted by a huge swathe of support frigates using the beams for mutual reinforcement. 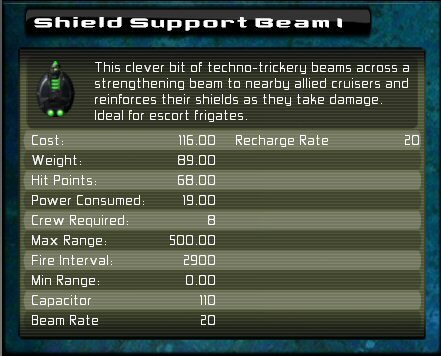 Surprisingly, this turns out to actually be super effective in comparison with filling those frigates with weapons and other useful stuff. I spent a while playing, and analyzing player challenges where it was claimed the SSB is just *too* good.

So I nerfed it badly to see what was needed to get the sweet spot for this new weapon. Serious nerfing of the transfer rate was tried. Then serious reductions in the amount that would be held in capacitors. Still, the SSB seemed awesome, in large numbers.

Then, eventually, I concluded that it was the mechanic, not the numbers that caused an imbalance. The SSB was being used regardless of the state of the target ship. It could be under intense plasma fire, and be ECM jammed, and still shake offf all attacks thanks to 6 or 8 SSBs boosting its shields. I wanted a single SSB to be worth having, but at any reasonable level, the combination of 8 then became a super-defence.

So my currejnt thinking (under testing now) is to nerf the SSB by reducing two key stats (beam rate to 20, recharge rate to 20), and also introducing three restrictions:

I think this is the solution, but feedback is much sought. After all, I stupidly thought it as balanced already :D Ideas?