I should have done this ages ago. It wasn’t anywhere close to as tricky as I assumed it would be. The polling screen now has a timeline along the bottom with little icons for everything that happened in each turn. if you hover the mouse over one, they expand to show all of the ‘stacked’ icons for everything that happened, together with tooltips. You basically have to remember/guess what you did,. so if it was a policy, you need to remember if you raised/lowered/introduced/cancelled it. I might add further tooltip data to clarify that. Either way, this is definitely an improvement. 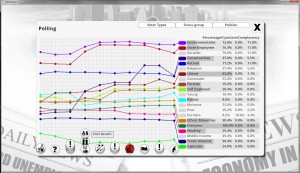 Improving the polls screen between games

Apart from the fact that it now has tabs for focus groups and policy popularity, I just think that the general color scheme and layout of the new polling screen (bottom) is miles better than the old one (top). Democracy 3 is the game I could always see in my head, I just couldn’t actually make it until now… 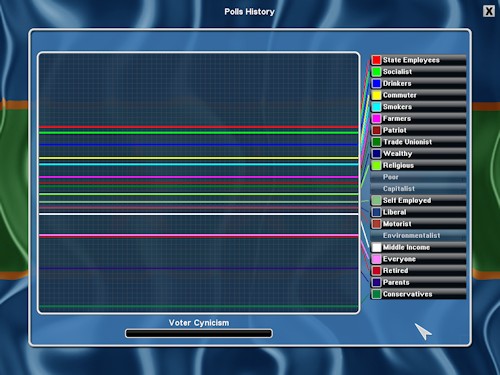 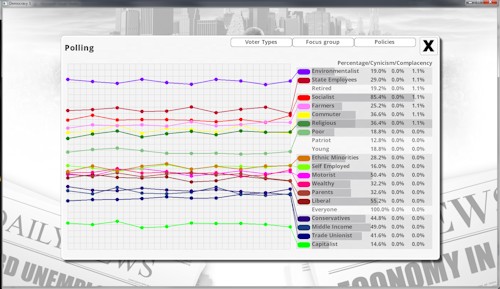 Infinite… but minimal need for me as a player

I bought Bioshock Infinite yesterday. It’s a big budget game that looks intriguing, I enjoyed what I played of Bioshock, and I saw floating cities and thought it could be cool. I also like to ensure I’ve played a few AAA games now and then to remind me how they work :D

I’ve played about 2 hours of it, and it’s kinda cool, very ‘impressive’ and clearly cost a lot. I’m not sure it’s genuinely fun for a player like me, for various reasons. Firstly I’m not a chisel jawed wisecracking American who punches lift buttons with his fists, so I already feel like it’s not really me playing, by my voice and my actions. Secondly, everything seems to be glowing. Nice bloom effect, but give it a rest please. These are fairly minor things though, that I’d happily overlook to experience adventure in what is a very interesting world. 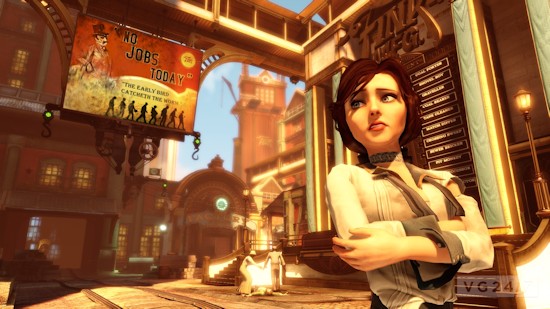 The problems that put me off are more fundamental. Firstly, I don’t really feel like any skill is involved. I picked medium difficulty, but I haven’t run out of ammo, salt or health once, and that’s with me bouncing around like a hyperactive squirrel spraying bullets everywhere. I think I died twice, but it really didn’t matter. As a result, I don’t feel scared, or excited. I basically can’t lose, and am not challenged. I can burst into peoples homes and rummage through their house for money without a second thought, and nobody I’ve encountered has posed any real threat whatsoever.

Maybe that’s fixed on higher difficulty, at least for shootouts, but it certainly doesn’t require any stealth in the way the old thief games (or even dishonored, to a very superficial extent) did.

More fundamentally, there is no real sense of sandbox or player control. They have created an amazing world, but they then wrote a movie script for it, gave me superficial control of a character at certain moments, and spun me around like a puppet on a scriptwriters strings for the majority of the predetermined story. I say things I wouldn’t say, do things I wouldn’t do, and spend a lot of the game running predictably forwards as things fall down just behind me, or to one side. I know I could go slower and it wouldn’t matter. I know the pillar that hits me as it falls is scripted to and I can’t avoid it. I may as well just hold down the W key with one hand and play the game blindfold.

I see games like this as a missed opportunity. I know they appeal to a certain crowd, and are very well made for it. I just wish they could take that same awesome world, awesome design and huge budget and make a free-form sandbox game where I could adventure in that world with entirely emergent gameplay. Apparently GTA games do a lot of it. Thief did it better. Just Cause 2 did it exceptionally well.

To me, this is a horribly expensive use of art assets to just wheel me past amazing vistas as they explode. I know it sells, I just wish we could have true, challenging sandbox games set in such a world. No quests. Just free-form experimentation within systems. basically i want ‘sir you are being hunted’ with Bioshock infinite’s budget.

I sell games to a lot of people with BIG monitors and desktop PCs. But then, a lot of people also play, and surf on smaller-screen laptops. Basically it is about time I stopped serving the exact same web page to everyone. So as of today, positech.co.uk is a little cleverer than before!

check it out, and try resizing the window if you have a big screen:

The bulk of the site is the same, but depending on screen width, you get 3,4 or 5 little images linking to other games under the big slider thing. I think this makes good use of 1920 res monitors without sticking horizontal scrollbars (ugh) on smaller browser windows. It’s easy to do as well…

You just need to use some CSS, and a few <div> sections here and there. if you name a <div>, you can adjust it’s width based on the browser window inside the css like this:

That makes the gamesection div 1316px wide if the screen size is between those 2 values.

I can then hide/show the ‘optional’ boxes with the extra images the same way, using named divs in the html:

I thought it was cool anyway :D

Who would be a game developer?

Some people, noticeably kids, seem to think being a  game developer sounds awesome. You sit there and play games all day (no) and you earn money like notch (no). It’s fun because you do whatever you like (no) and anyone can make a game these days (no).

I’ve blogged a lot about the work, and effort, and technical knowledge required, and the likely rewards (low on average) and chance of success (very low on average). What amazes me, is that in addition to all that, you also often get abuse hurled at you from people.

Granted it’s worse in the mainstream industry (no 45 person company that behaves like this is ‘indie’ I resent them using that word to describe themselves). in that your actual direct boss may be the one shouting at you, and threatening to fire you if you don’t work an 80 hour week, but the minute you have an online ‘persona’ and direct contact with gamers things can get kinda nasty. For example, a recent game developers tweet (I wont’ draw further attention to it, in case he doesn’t want any)  revealed how someone following him on twitter had threatened to turn up at his house and stick a knife in his throat, because (as far as I could tell) this guy wanted him to roll back a recent code change).

It’s an extreme example, but I do not know a *single* indie game developer who does not have a story of harassment online from someone who is a gamer. I don’t mean the usual forum trolling crap that idiots on sites like you-tube are always guilty of.  I mean people threatening physical violence, wishing you would die from some disease, insulting you racially or threatening to spread rumors about you to destroy your business. I’ve had people threaten to kill my cats, to spread lies about me to try and break business relationships or put me out of business. I’ve had people saying they will dedicate their life to ruining my business.

Let’s just pause here and point out what I do for a living. – I make games.

I just thought I’d stick that in, in case you forgot, and assumed I was a gun-runner, drug-dealer, sex-trafficker or terrorist for a minute or two.

The general consensus amongst devs is that you never ‘engage’ with abusive people. You just delete the email / ignore them, act super polite and hope they will forget about it. But in a way, that’s how bullies go through life without changing their behavior. Eventually, they become senior management and treat their staff like crap, one can only assume? I don’t think as a group, indie game developers should treat ‘receiving abuse’ as ‘part of the job’. If we were actresses who were being abused, nobody would say ‘that’s just the job, deal with it’. People would be outraged. Why is it ‘ok’ to hurl insulting abuse at people who make video games?

I met a fellow indie dev at GDC who got on to the topic of dealing with anonymous internet abuse being hurled at him. We chatted a bit, and he had a big smile on his face as we talked about the different people and what they had said to us / threatened us with. He was smiling with relief, because he realized it wasn’t just him. He wasn’t being picked on, he wasn’t doing anything wrong, he was just a game developer, and that means the internet thinks he is a punch bag.

It’ s pretty crappy, and it’s no way to get what you want. People don’t listen to your arguments about games more because you are abusive to them. They probably just delete them. It’s about time that abusive 1% of the gamer community learned that lesson. I have some customers who can email me and ask for new features to be put in the game, and they go to the top of my list of things I need to do, because they asked for them, and they are great people, and I want them to enjoy the game. Nobody on that list is someone who was abusive, insulting or patronizing.  That’s probably the 99% of gamers who are great. pity about that 1%.