Revisiting the tile based game

My next game has a tile-based system behind it. Gratuitous Space Battles didn’t have tiles because if it did, all of them would be “tile 1: space“, which is kinda dull.

Tile-based games are typically associated with very old school RPGs and with early top-down very basic RTS games. Generally, these games seemed to have a set number of tiles (a ’tileset’) and the tiles would be of  fixed size. The tile size was small, to enable sensible pathfinding, but this would make the terrain look very obviously gridlike, with tiles repeating and the largest terrain objects being tiny.

Tech has moved on, and we can afford to have big textures now, but the problem is that a system that uses the tiles for non-visual stuff (pathfinding, AI, terrain etc) still probably needs fairly small tiles. For a while, I was struggling with small tiles and coder art, but the first few bits of proper art have forced me to reassess how I was doing things.

It’s all coded now, and the solution was to basically have two overlapped tile systems. Effectively, the game grid works on smallish tiles, and the visual tiles that have textures applied to them are four times the size. This is completely transparent to the gamer, but it does make for a slightly strange ‘change edit mode’ button in the game editor, and some slightly messy code. Eventually, the system I plucked for just uses the smaller tiles, in the game engine and the editor cunningly lets you apply the larger ones, and transparently splits them into 4 and applies them to the smaller ones for you.

It was a bit of a pain to code, but worth doing. One day I’ll have screenshots to show!

The viability of small, short games on the PC

Increasingly, my thinking is that ‘knocking out’ a quick, easier to make, low budget indie game does not make economic sense. That has never been my plan, but I’m getting even more convinced that to do so will not work.

Obviously there are arguments in favour of a low budget quick, small project (I’m defining that as under 6 months development time for 1 person). I’d guess they are as follows:

I think this is outweighed by the downsides:

I know some devs making a living from small, quick-development games. Personally, I think that they would make a better income from bigger, higher budget titles that they spent longer on. Obviously YMMV, and your aims may differ. I know many devs suffer from critical burnout, and love short dev cycles. I think my limit is 2 years, I’m not massively keen to continue tweaking and adding to the GSB code base now. However, I am assuming that the new game (sort of code worded LB) will be of a similar development scale and polish. Hopefully much more :D

Show Me The Redesign!

After a long period existing as a rather ugly thrown together mess, my little side project indie games database / promotion website ‘Show Me The Games’ has got a decent revamp:

I think it looks way better: 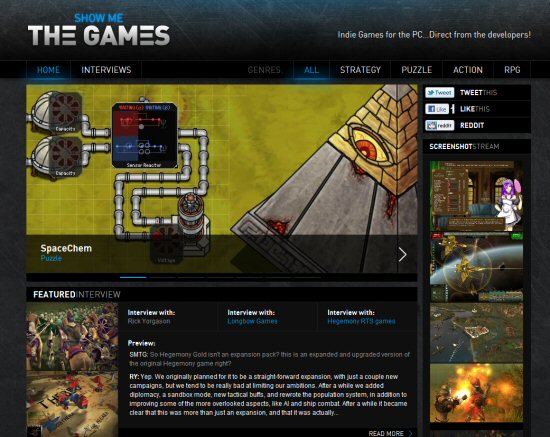 What do you think?

In my never ending quest to have 1% of the metrics-obsession of zynga, I’m going to just brain dump loads of web stats and see if anyone can drawn more epic conclusions than I can.

32% was direct traffic, which is interesting becauise I’d assume that was forum stuff, but the forums aren’t tagged by analytics at all. Weirdly, the top content for direct visits, with 10% of the total is the Kudos homepage. I bet this is a link through some [code] tags on a pirate site, hence no referrer. Oh joy.

If I look at new visitors, their top destination is Gratuitous Space Battles.

If I look, in general at visitors to the GSB homepage, the bounce rate is 44% which isn’t so bad. 24% of those who stay go to the demo page next, which is also a good sign.

When looking at the demo page itself, 18% of people bail out here, the top move for people who don’t is the demo download link, other people visit other parts of the site. That’s pretty good.

The second most popular page on my site is the positech homepage itself. It has a bounce rate of 45%, which could be lower, considering there are so many possible destinations from there. Scarily, the top destination from the homepage is actually this lil ol blog here. Very surprising, I’d expected the top result there to be GSB. Should this bother me?

Quite a few people click the small icons going to pages for affiliate sales. Harvest:Massive encounter got over 200 clicks in 14 days. There were zero sales, and generally affiliate sales are very low. I am strongly minded to remove all that from the front page, and concentrate on my own games, especially as I now have showmethegames to promote the general indie scene.

Looking at visitors, I can see that firefox is #1, followed by chrome. Internet explorer has just 23.8% of visitors. Specs-wise, the most common screen res is a scarily low 1024×768, followed by 1280×800. This seems to me that it is mostly laptop and netbook surfers. I surf a lot on my laptop, but work on a massive four trillion pixel monitor.

Demographics wise the top visitors are from the US, then UK, Canada, Germany, This is all good, and due to me changing the settings on my ad-campaigns no doubt.  Stats are awesome, the top state is California, and the top city is San francisco. You SF surfers are busy, with a shorter time on site than average :D. Scarily, if I look just at users who visited the GSB buy page, the #2 country is Brazil. I can’t find any sales to Brazil, so one can onyl hope thiose Brazilians tell their German friends they should check out the game…

I know… I need to get a life or something :D

The wild economics of selling online

There seemed to be a time where everyone worked in, or owned factories. Those factories would make widgets. You would build a widget factory that could make 10,000 widgets a year, and it would need to sell 5,000 widgets to break even. If you were unlucky, you sold less, but you probably had upgraded from a 2,000 widget shed/living room/small workshop, so that was unlikely. The best scenario was you sold 10,000 widgets, making perhaps twice the expected revenues and four times the profit. Maybe next year, you can borrow the money for a 20,000 widget factory, assuming widgets are still popular. Over a decade or more, you may end up tripling your salary, as owner.

Now it’s different. If my widgets are digitial, I can scale my factory far more cleverly. In terms of physical workspace, I need none, because bandwidth can be bought per MB and per second in ‘the cloud’. If I need more staff, I can recruit online, choosing from the estimated 1,966,514,816 people who are online, rather than the 2,000 people in my town. My ad budget can scale upwards by a factor of 100, or even 1,000 in the click of a mouse. You can even hire people online on a piece-work basis, and happily outsouce the customer service, the usability testing, the payment service, product fulfilment…

Obviously the reverse is possible too. The zero-infrastructure means there is nothing to sell when things go bad. The benefits of zero physica assets can also be a curse, in terms of the company having no real physical assets of any worth whatsoever.

It occurs to me that this is leading to far wilder income disparities for entrpreneurs than ever before. Only the most hardcore socialist thinks that everyone who runs a business is somehow evil and rich. We all know our local corner store that looks a bit ropey and probably doesn’t earn much. Generally, with the exception of bankers, we consider that competition works, and that businesses are making a reasonable profit, but not likely anything extraordinary unless there are outside signs, like a 10,000 strong workforce or huge headquarter offices.

Online changes that. Its only the publication of his sales data that makes it clear that minecrafts creator makes so much money. It’s only the l33t published office pictures that hint that puzzle pirates brings in some decent cash.

Online is different. People running a business online may be (often are) barely breaking even. They may also be multi-millionaires. I know quite a few people with online businesses, and their profitability varies dramatically. Despite my awkward admission I paid £75 for some jeans once, only me and my family know if positech is any sort of financial success.

Just as there may be more minecrafts than we know, there may be more penniless businesses too. If your corner store drops down to earning $100  a week, the rent is too high and your business folds. I know MANY people who have an online business that earns under $100 a  MONTH. The businesses still exist, albeit as part time ventures. Website rent is trivial compared to bricks and mortar, and the businesses remain active. The spectrum of online business success is far far wider than it is in the real world.

We live in interesting times..