Theres some games conference going on, but I’m not there, and it’s very pazazzy, so I thought I’d blog about loft insulation instead. I’m sticking it to the man.

I live in a very old (1750s) house built out of mud and dead peasants, and it’s extremely cold at times. This is because the house was built before mankind invented double glazing, or indeed, glazing, it sometimes seems. Anyway, part of my five year stalinesque plan is to insulate the darned thing, and we are currently working on the attic. the attic is big, has lots of old beams and is about two hundred degrees below zero.

Taking away the side panels to see what was behind them revealed this: 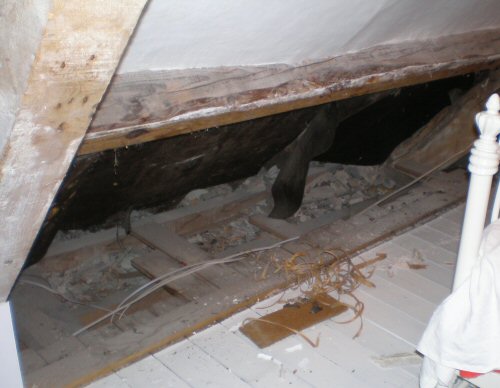 Which is to say mostly 18th century rubble, dust and the remains of fossilised birds nests. Not a completely poor insulator, but not exactly aerogel. Clearly we could do better, but we needed to preserve an air gap to allow air to circulate. These old houses need to ‘breath’. We ended up wedging individually cut pieces of reflective-backed foam insulation between the rafters, with tiny blocks to hold them in place. That felt is all that is between me, and the stone roof tiles, and then open country… 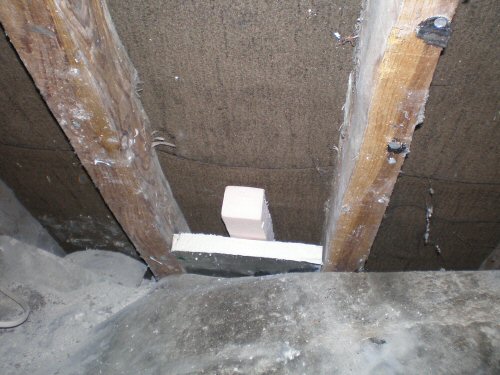 Eventually that was all done on this bit, which is the lower section of a quarter of the half of the room we are currently doing. This will tke years. (we ended up doing a quarter of the attic, to date). a second  layer of felt goes back, pinned on top of all this. 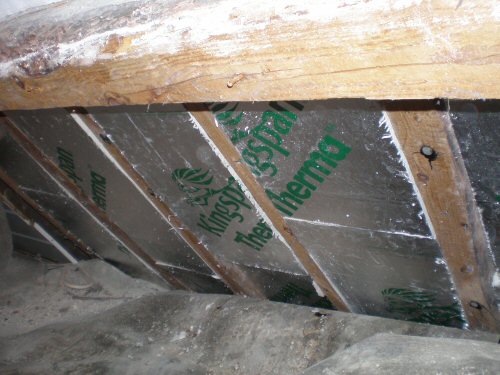 Then the fun bit, which is laying lots of ‘semi-rigid’ sheeps-woolesque soft insulation between the floor rafters (not visible here), and then laying an additional layer of really wooly even more sheeps woolesque stuff over the top, curved around to prevent any drafts. You can also see a big thick mega-chunky piece of foam insulation that will go in front of all of this, behind the wooden side panels (the panel itself is very thin and crap). The sheeps woolesque stuff was horrid. cue lots of spluttering and itching. 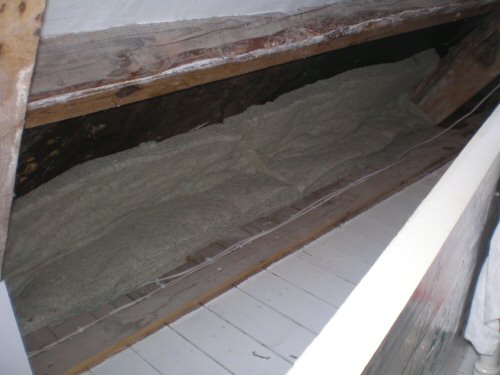 This is everything put back in place, all I need to do now is fill the slight gap where it meets the beam with flexible filler, then I’m going to give the whole thing a coat on nano-paint. it sounds like bullshit, but we used this in our living room and it’s very very good. Basically a nanotech paint additive that reflects heat. great for insulating where cavity walls don’t exist and internal insulation isn’t an option. This is what it all looked like before we started. This time it might be warm though. It’s certainly quieter. 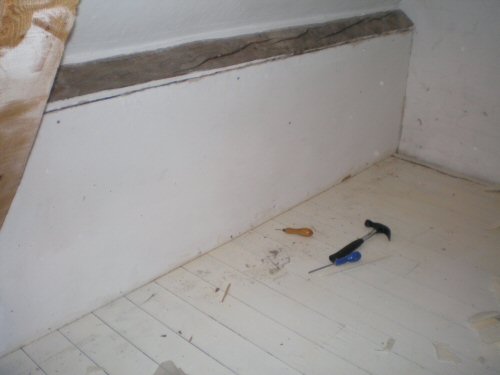 The other end of the room is much much harder to get to, so we are employing someone to come balance on ladders and do that end for us. One day, the temperature of the house will get to the stage where we can have just 2 duvets in the summer. One of the positive outcomes to doing this, is that as I lay there covered in dirt, hammering nails and swearing, I remembered why I gave up carpentry to become a computer programmer. Woodwork sucks. Debugging might be annoying, but C++ doesn’t bend when you hit it.