I’m back 100% on the campaign tomorrow, I’m at the stage of doing tutorial text for it, then I need some complete run-throughs. Then maybe a pre-order beta release.

I’ve also been drastically improving the games memory usage. And also some baalnce tweaking. This is what I’m likely to be changing:

I’ve been working on about 16 different things, but one of them was to reduce the memory leakage of GSB. I know some people design very cunning survival-mode fleets and have battles that can go on for an hour or more, and basically GSB leaks memory quite badly right now. Also, if I ever want this game ported somewhere, it will need to get it’s memory use under control. Plus campaign games sometimes lead to some VERY big battle, which makes the issue worse.

Lots of fiddling around (writing my own memory allocation debug stuff) means I could watch exactly what was getting allocated mid battle. I dumped every memory allocation during battle to a text file, then chopped off the first 10,000 (so I don’t worry about early allocations, which are then cached and re-used anyway), so I could see what the long term persistant offenders were.

The next step was to ensure I was looking at the *amount* of RAM being used, not the number of small trivial 20 byte allocations. Those need optimizing too, but not now. To do this, I stuck all the text which looked like this:

Into Excel, and created a pivot table out of it, to nicely summarise each allocation type by number of calls and total RAM allocated. It was clear that particle allocations were rare, but huge. It was immediately clear that I was allocating memory for a big mega explosion even for the tiniest 7 particle fighter-impact effect. All I did was re-write the particle code to calculate on application-start what the maximum number of particles were that this emmiter could ever need, and then ensure it never allocated more than that when I created it.

Some more work with extensive debug display code mid-battle was done to ensure the new system was working as expected, and that the majority of the allocated RAM was indeed needed and being used.
End result? My test battle (Multari nebula, a fair few fighters, fought to the end with all options turned on) went from a peak of 403MB for GSB.exe to 305MB. That’s pretty darned good. The savings on bigger, longer battles will be pretty noticable.

Expect that improvement to be folded into a future update.

Ok, first things first, let me announce the release of a new race for Gratuitous Space Battles. They are called the nomads, and you can see more info here, and watch a video of them here (or below). And you can even go buy the new DLC here.

The idea for the nomads are a sort of retro-future race, suggesting a species that has been around a loooong time. They are travellers, and fighting purely for sport. They don’t come with any new technology or weapon types, but they do have a few extra tweaked ship modules. Also, there are not new singleplayer missions, this is just a race for you to use in existing scenarios, or in challenges.

Here is an embedded video showing off the new ships:

Now comes the slightl wacky bit. I’m selling this DLC for $5.99, just like all the previous races were, and there is no change there. If you are a long time GSB plauyer and just want the new race, then go buy it, it’s $5.99. That gets you the standard version of the DLC. There is also a ‘discount’ version of the DLC. The difference between the two is that one is $5.99 and one is $2.99. That’s it.

Obviously the standard one costs more, and I get more money as the developer. The discount one costs you less, and I get less. There will be updated stats on the page here showing who bought what.

It’s entirely up to you, which one you buy. You decide. I would obviously prefer you bought the standard one. Nobody will ever know what version you bought, the files are identical. This is a bit of a sudden manic experiment to see what happens. If you genuinely have very very little money and would have waited months hoping for a bundle or a sale, then you could make an argument you could get the discount one. If you frankly, *do* have the money to spare and would buy it anyway if there was only the $5.99 option, I’m asking you to do that.

This might make me look really stupid, but I’m prepared to risk it. I like trying new stuff in business. I think it will be interesting either way. Also, the DLC is more about promoting the game and making a bigger range of ships, so there is more variety. None of these expansions are really aiming to make money, the core game does that. ( I hope!)

For those who don’t know, I moved into an OLD house (approx 1750), and am trying to improve its energy efficiency. The house was laughably inefficient and leaky when we moved in, and its better now, albeit incredibly bad by modern standards. Being a ‘listed’ building, I can’t have double glazing, and the house is built before cavity walls were invented.

Anyway, one of the long term plans has been solar panels, and many many weeks and months of debate later, I’m slowly edging closer. A structural engineer told us (for £200) that he has  ‘no idea’ whether the kitchen roof can handle the weight of solar panels. So that was just fab.

A better person than me recently found a company that seems to be the world experts in making lightweight steel roof tiles that have integrated solar panels. How cool is that? And where in the world are they? About 10 miles away. How double cool is that? I’ll be speaking to their solar guy on monday.

In unrelated news, I bought an ‘ecofan’. It’s one of those clever little propeller fans that sits on top of a wood burning stove, and uses the rising heat from the stove as its own power source, then gently blows the warm air around the room, reducing the amount of wood you need to burn. Is it worth it? I dunno. It’e been warm ever since, so the fan sits there, unused, braced for it’s first night, full of exciting promise.

One of the things we changed was to get new radiators fitted. We now have the old fashioned big tubular things, like they used to have in British schools. They are pretty cool. We swapped some badly placed ones for longer, shallower ones, so that they don’t just throw all their heat out of the windows. We also got a cast iron radiator. Have you ever tried to lift a cast iron radiator? They weigh more than a star destroyer. It took four of us, together shuffling it a foot at a time. That thing holds more water than a thousand olympic sized swimming pools, and when you turn it off, the house stays toastry warm for six months. It looks incredibly steampunk. If there were radiators in captain nemos office, they would be that one. It has etched patterns and allsorts.

If I ever actually get working solar panels installed in this house, I may have to have a celebration cheap games sale or something.

I’ll have news monday. News of a silly experiment.

I see no harm in making my immediate future plans public.

In no specific order this is what I have coming up:

1) Release of the 1.47 patch to all partners (valve etc). I did this this morning.
2) Release of the new Race (The Nomads) On my site, in a slightly strange way (details to follow) then on the partner sites when I know it works ok. Teasing screen: 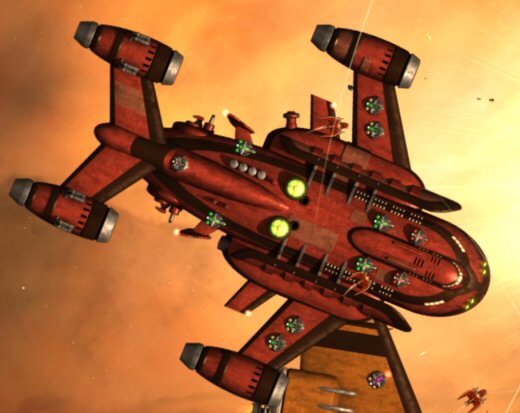 3) Talk to Steam and other partners about selling the Mac copy of GSB.
4) Pre-order / beta access and eventual release of the GSB campaign game.
5) Game IV.

In amongst all this, I’ll be taking the first holiday (only a week) since I moved house, and it will be my Birthday. I also have a visit from a  structural engineer today to tell me if my roof can hold up solar panels or not. I will be mr sad face if he says it cannot.