How much TV do you watch? If you are like me, you are watching less and less. It seems to get less appealing every month, let alone each year. I’m sure eventually my TV will be used for DVDs, and maybe the news.

One of the TV progs in the UK that is supposedly for grown up, intelligent people who want to know what’s going on in the world is Newsnight. It’s a lateish-night politics and current affairs program. The last time I saw it, they were doing an item on the upcoming voting reform referendum, and whether or not it would cause a split in our governing coalition. How did they present this serious and deep issue?

By an animated cartoon showing the two leaders as john travolta and olivia newton john, and playing the music from grease. Oh, granted, there may have been a few minor nuggets of actual commentary about the topic, using short words and visual aids, but I still felt like it was aimed at the 4-8 year old market, who should definitely be in bed at that time. 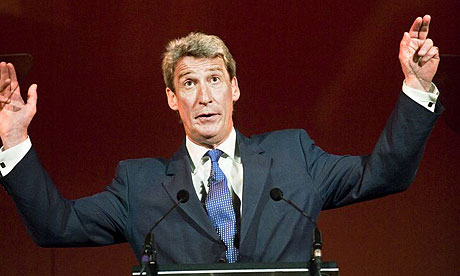 British TV is increasingly embracing it’s role as ‘the idiot box’. Not only are a lot of the subjects covered by TV purely for bored idiots, but even the stuff that you would think was serious, or needed in depth coverage is treated as some sort of lame comedy routine. Maybe some clever TV analysts have discovered that everyone with college education or higher just doesn’t watch it anymore, so they just cater to the lowest common denominator? Silly visual gimmicks seem to assume that the entire audience has attention defecit disorder.

Maybe I’m weird, but I can cope with watching someone sitting still, talking to camera for ten minutes in a normal voice about something that is really interesting. When I read a book, the book doesn’t have little animations, or cartoons, or wave its arms about wildly every sentence to keep my attention. Books can’t do that, so they compete merely by having good content. It really doesn’t matter how much you wiggle your head and wave your arms as you talk, if you have nothing to say, nobody cares. We get closer to this mitchell and webb parody every day…

14 thoughts on The idiot box