I did some campaign stuff today, but also tried to finish off my weekend stencil buffer fun, had a brief flirtation with shadows, and got loads of stuff working, but was not happy. Basically my plan was to be able to take an image and draw it so it only appears on the ships. This would work for light sources, as well as shadows.

It worked! using pixel shader version 3, mind, but that would be togglable. The downside is, it looked crap, mainly because the ships are just sprites, and shadows therefore just splat over them rather than ‘rolling’ and it looked fake, and maybe worse than none. The lighting glows stuff looks better, but still bad. Using normal maps for the ships is theoretically possible, but insane amounts of grief, especially because it wouldn’t work on the turrets without re-doing them all. Bah.

Here is how it looks, if you can even tell. There is a brighter light glow around the laser bullets, as they move over the ships.

It sucks, and I am determined to get the game looking better than this. Also looking at other potential effect improvements…

I was determined to not do any actual *real* work today, what with it being Sunday. but because I love coding, and silly graphical tweaks, I spent the day fiddling with stencil buffers, to no real avail. Originally, I was hoping to do some code where explosions happened ‘within’ the ships rather than just stuck on top. I sort of got it working, but it didn’t look as good as I wanted, so I switched to another idea for different stuff that involved stencil buffers, and wasted hours trying to get that stuff working.

It’s *almost* working now, through another method, but tomorrow I’m back at work properly. Partly because I will lose some time this week anyway due to going to London to give a talk on indie stuff on Friday, and probably spending monday doing my powerpoint presentation for it. That meant *buying* Microsoft office 2010 to install powerpoint*. It’s pretty cheap! (if you don’t want outlook) and I haven’t bought a copy since 1997, so I’m due an upgrade!

In unrelated news I’m also meant to be varnishing the bathroom floor, which first means getting some floorboards filled in with new bits of wood. I just know that is going to take ages. The varnishing is trivial, as I used to do it for a living. It’s the trying to make a piece of wood fit another piece of wood that I’m not keen on. Plus… Jack has got very good at bringing live voles in from the garden then chasing them around the house. Grrrr.

*I assume powerpoint files run on pc or mac interchangeably?

Just a bit of a public brain-dump from the campaign stuff I’m working on again.

In other news, I’m apparently going to be giving a  20 minute talk at the World Of Love Indie game conference next friday in London. Eeek. Public speaking etc. Scary…

I’ll probably talk about the business side of selling direct on the PC, because not many people have succesful experience of that, so it might be interesting to some people. I hate being known as ‘the biz guy’ as much as ‘the piracy guy’. I’m a game designer and coder really, but there are lots of people who talk about those topics. Ho hum.

Check out this page:

Maybe if you treat your staff better, your human resources dept wouldnt need to be working overtime?

So after getting feedback on what people didn’t like about GSB that prevented some sales, I decided to offer a ‘collectors edition’ of the game that has all 3 expansions in with it, for $25.95. Thats much cheaper than buying them seperately, by a huge chunk. Also, it’s just one installer that blaps everything in the right place, no so more confusion over install paths (yay!)

It’s for sale at that price now on my site:

Look, theres a picture of boxes and everything! (actual game does NOT come in a box. Who needs boxes these days?). Obviously I’m a completely rational ferengi, so if this means revenue actually falls, I’ll probably put it back as it was. 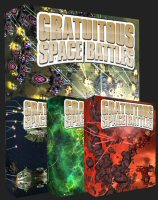 Sales are pretty slow these days, I’m assuming thats E3 sucking in all the attention. I am not paying much attention to it, but I predict lost of new controllers based on waving your arms around, and some games involving butch space marines kicking butt. With bump maps.