I got the wobbly cloak + damage textures stuff working in the end. I used a separate render target. Basically whenever a ship is cloaking it uses a separate texture to composite its damage and hull together, then renders from that. I’m not sure how slow SetRenderTarget() is, so I’m avoiding using it all the time.
Today I redid all the damage textures. I used a picture of an oil refinery at night, color-adjusted and light intensified, and use that to ‘paint’ sparks in gaps in the damaged ships hulls.
I also added debris. I cut out some parts of the ship, and scattered some of the damage texture magic on them:

I then emit some spinning bits of debris when a ship is hit or destroyed. The debris is all one texture and drawn collectively (on top of all the ships) so it’s a single vertex-buffered draw call and shouldn’t be too slow. I’m certainly getting awesome frame rates, even with tons of smoke trails, explosions, spaceships, debris and laser effects: 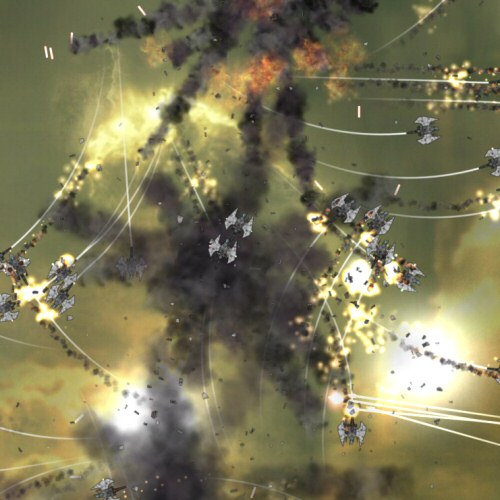 Tomorrow I’ll be doing some more of the AI behaviours for the ships.

I’ve just encountered a bit of a dilemma.

I have this wibbly wobbly ‘not a cloaking device’ effect on the ships in GSB. The thing is, it wobbles the original ship sprite, and when I’m drawing ships, I’m also attaching some extra sprites for stuff like damage textures etc. Not to mention flashing lights etc.

When the ship cloaks, this means all those extra sprites effectively disappear, which is very jarring, and breaks the sense of ‘realism’ of it all. I’m not sure yet how to handle it. One idea would be to fade out all of those sprites over the few frames before the ship starts to wobble, so it’s less sudden, but that still makes no sense. Ideally, I would apply the exact same distortion to each sprite as I amd doing to the ship sprite, but that is problematic and complex (to put it mildly).

I could just wobble them ‘out of synch’ with the underlying sprite, but that would lead to some artifacts which would look crap. There is a video which i think shows it a bit below.

The way I wobble the ship is to basically split it into a grid and then wobble each point on the grid out of synch, the sprite is then drawn like a flat mesh grid, with bits of it stretched all over the place. If the damage sprites sat at exact grid intervals, this would be easy, but they do not.

It might make sense to actually burn the damage texture onto the ship texture. This would make things very easy, but suddenly if I have 10 frigates on screen, I have 10 times the texture memory (worst case).

Even as i type this, I realise the answer is likely to always align the damage textures themselves at grid wobble boundaries, and then to wobble them in synch. That doesn’t solve the issue of flashing lights though.

What A nightmare. i hope people use the wibbly wobbly effect a LOT.

I’m ‘exchanging contracts’ with a publisher for something right now. I signed two copies (two!) and they insisted on them being physically shipped. This isn’t unusual, or particular to them, but now that FedEx have seemingly lost the ‘parcel’, it makes me reflect on the insanity of the situation.
There are three types of business:
1) Businesses that allow you to email you an agreement, or at the very least, print out a document, sign it, scan it abck in and email it back. Needless hassle, but the best of the three. (I know for a fact that they can’t tell if I just pasted a fake signature from photoshop onto the document without bothering with the print/scan bit).

2) Businesses that won’t accept that, but will accept a FAX. This is the most insane of the three, because the people at these obviously do not realise that a fax gets converted into bit and bytes, and so does an email. A fax is just a really special=purpose clunky way to email a scan.

3) Businesses that insist on a physical copy. 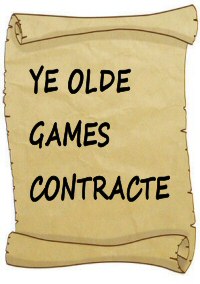 The physical copy thing amazes me. what IS the difference? Is it REALLY harder for someone to ‘forge’ a contract signature by physical mail than it is by email / fax? Do they think that if it goes to court, that forensic teams will carry out analysis of the paper fibres and handwriting and proclaim it to be original or a fake? Is this REALLY going to happen?

People have forgotten that paper was used to send INFORMATION, and contracts were used for that purpose. We have moved on from fingerprints or making an ‘x’. We do not need to squirt some extract of a squid on parchment and then put it on the fastest coach and horses any more. Some clever dudes invented email.

Presidents, Soldiers, Criminals, Journalists, even my retired father and my technology-hating old boss who makes wooden rowing boats have all embraced EMAIL. Join us lawyers… you are late… but you are welcome…

I’ve been improving the explosion effects today (not shown below) and also adding a glow effect when armour takes a hit (not shown) and adding a few more spaceship graphics to the game. There is such a lot to do, but I’m already having great fun watching the fleets fight. I also tweaked some of the visual effects for a few weapons. I need much better beam laser effects now that you can zoom in and they are so big. They just blurp out of nowhere and look shit :D

Amongst other stuff, I’ve been listening to feedback on the damage thing and changed some stuff. Plus adding some new artist-drawn ships to the game. Here is the results:

Changes I made:
Redid the damage textures for some of the ships
There are now 4 different variation of smoke sprite
The smoke sprites now spin slowly
The smoke sprites use a newer texture, sampled from real explosions so they aren’t as black
I changed lots of emmiter variables too so it seems to billow a bit more.