Soo…remember back in the early days when dinosaurs roamed the earth and I released a political strategy game called Democracy 3? I do. It was fab. And of course it still is. I’ve rel;eased 3 expansions for the game since its original release, and all have proved to be very popular. After that, I turned towards making Gratuitous Space Battles 2, which took FOREVER, and also worked with Tim from Twice Circled on shipping Big Pharma, a 3rd party title. What this means is that its been a long time since the core Democracy 3 game got any attention, despite being very popular.

I’m working on a patch for Democracy 3 (Plus other stuff…to be revealed in a few months), to fix some issues that have come up, but mostly because revisiting the game with fresh eyes makes me spot a bunch of stuff where my older, wiser self goes ‘why the hell is that dialog so small?’ and ‘why don’t we just show the policies that affect intelligence reports here…?’ and similar stuff. This is not going to be a new expansion, or a sequel, just a patch, that fixes some stuff. I’ll also possibly attempt a little bit of re balancing, and add and tweak a few relationships and effects which should be there but are not.

The biggest change will be new achievements. Personally I love achievements, and I’m adding 12 brand spanking new ones with the upcoming patch. They include some arguably negative achievements, like creating an apathetic electorate and huge inequality. They should be fun things to shoot for :D. 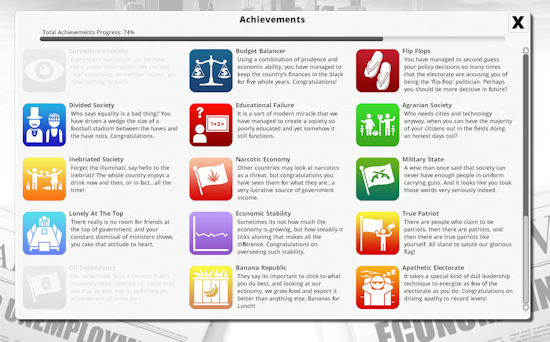 So why do this? I guess I have both business and personal reasons. Personally, I like my games to be as good as I can make them, and there were a few GUI things that bugged me about D3 on second look, so fixing it makes me ‘feel better’ about the game. I know some people enjoy the prototyping phase, but personally I love adding final polish to games, especially GUI-wise. I’ll feel prouder of the game when this patch ships in the next few weeks.

Secondly, as people start building ad-blocking into browsers (seriously…wtf?), and everyone starts happily using adblock, and as the whole system of being able to market games in 2015 collapses into a loud shouty smorgasbord of a million desperate game developers screaming to be heard at the same shows, desperate for coverage by the same youtubers, with price wars escalating to the extent that I’m amazed nobody is offering to pay me to own their games yet…Its pretty clear that one ‘marketing’ technique that still works, is just making a better game, a bigger game, a more feature-packed game, and one people market for you, because the word of mouth is so good.

In short, money (and time) spent on an update for Democracy 3, is kinda good PR. I’m still supporting it, its still getting better, surely thats a good thing. I guess we will find out soon :D