For those not following closely I am working on a new expansion pack for Gratuitous Space Battles. I was working on something else…but then i got seduced by the idea of more spaceships. I’ll return to the ‘other thing’ soon, I promise!

The new race is called the outcasts, and they are cybernetic types with a chip on their shoulder about biology. Think ‘the founders’ from DS9 but with a hatred of biologicals rather than solids.  In terms of visual design, they like their ships to be saucer shaped, with some exposed pipework and no shortage of engines or big glowy regions: 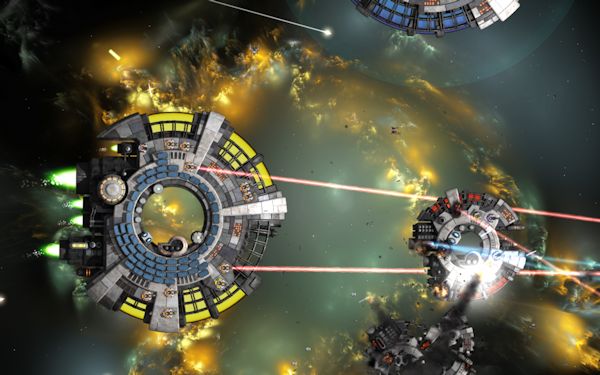 In terms of race design, I’m giving them a slight tendency towards faster ships (speed bonuses a plenty!) and concentrating on making better frigates for them. Currently my special ‘race-specific’ modules are as follows:

I may add other stuff, or make a few more radical changes during testing. I’ve also commissioned some awesome new music for the expansion from sean vella. This will make the outcasts the first new race to get their own special music recorded. Plus there are some stunning new nebula backdrops I got an artist to render for the new missions. For some reason, I’m really getting into this expansion pack :D There is no release date yet. I need to test and test and then release a patch to the main game to support them before I even consider releasing them. I can’t tell yet if it will be pre or post-christmas. Join in the discussion on the forums.

In other news, I just spent another fortune (well…£200) on insulation*. It’s COOOOOLLLLDDDDD here, and I’m determined to finish insulating that attic one day. I’ve shivered enough. Actually it’s not a problem if you are a normal person without an obsession with not using the oil-fired radiators like me. I’m a log-fire kind of guy.

*we have to use ‘breathable’ insulation in this old house, which makes the stuff much more expensive than normal.