This is something I really like, and comes in reply to feedback about how people hate having to guess what the underlying numbers are in tower defense games. I got it implemented today *still needs optimising…*. It’s a way to show easily the effects of a range boost augmentation for a unit. The units in GTB are built from GSB-style modules but some are ‘augmentations’ that apply to any module, such as ‘boost range by 10%’. I thought it might be cool, if such an aug is fitted, to show it as a distinct band on the range indicator when you select a unit. It’s the slightly separated strip around the edge of the range indicator for the selected riflemen. 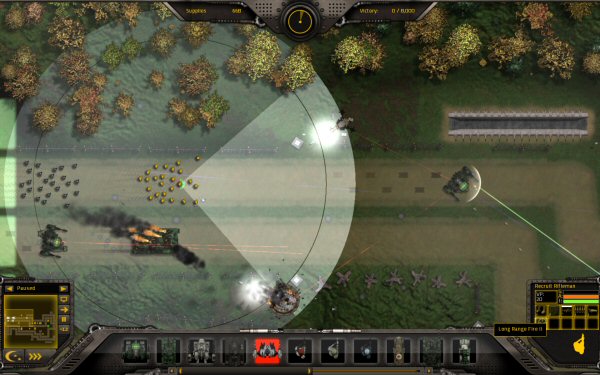 The brighter triangle represents the firing field-of-view for that soldier. Some units have 360, like mechs, but infantry can’t swivel their hips like that :D