I took slightly longer over the latest GSB beta patch, because most people were at least playing the game (albeit with some sound slowdowns) so I wanted to get more fixes in this one, and not get stuck in perpetual ‘patch-a-day’ land.

Here are the fixes:

2) Added option to change the number of maximum sound channels the sound system uses in prefs.ini

4) Added new togglable option to enable or disable pitch-shifting sounds with game speed, as possible fix for the 1.03 slowdown bug

8) The post-battle stats window now has a button to return you to the deployment screen, as well as the main menu one

9) Re-design of the hull picker window so ships are selectable from a scrolling list, and also are sorted in both race and then ship class within a race

11) Changed the way shield stability recovers from disruptor bombs so it makes more sense on ships with a much larger shield system.

15) Fixed crash bug when going from deployment to ship editor and back, then selecting one of the orders already displayed

If you pre-order the game NOW onwards, it’s already version 1.04, else it will autopatch when you start the game up. Hopefully this won’t introduce any new issues. (always a fear). The BIG changes for anyone who hasn’t encountered any crashes are the new ‘Keep Moving‘ Order for ships (useful for frigates, not applicable to fighters) and the changes to the way attack orders work, You really can now have ships that just refuse to engage fighters (unless only fighters are left). Feedback on all these changes most welcome, I know there is tons of other stuff to fix and tweak, even before I consider stuff to balance and add. That could take years!

BTW, A few people who are exchanging challenges by tweet are putting #gsb in the tweet. Hopefully this actually registers a bit somewhere and makes it look popular? :D

Amongst other things (mostly sound related) I’ve been tidying up the ship hull ‘picker’ from the ship design screen, which was a bit fiddly and unpopular. The new one looks like this: (click to enlarge) 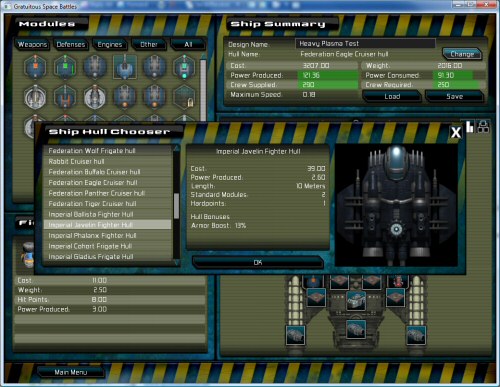 I wasn’t sure about the aesthetics of a three-pane look, but I’m assured it looks ok. I considered fading out everything behind it so the screen looked less cluttered. The big usability improvement (apart from the scroll wheel plus the keyboard up+down moving the scrolling list) is that hulls are sorted by race and by category, so you get all the alliance ships first, in fighter, frigate, cruiser order, then the next race etc…

I’m pretty convinced that is the sort of thing people wanted from it.

The performance slowdown on version 1.03 seems to be confined to certain hardware or windows combinations. I suspect it is related to the sound effects being sped up and slowed down, and this will be togglable in the next build, pending an eventual discover of exactly why that seems slow.  I’ve also been fixing tons of small Ui issues, and fixing some incorrect module data. The proper gameplay balancing hasn’t started yet, so if you think the game sucks because plasma torpedoes are too powerful 9for example), thats because I haven’t really got cracking on that yet.

Patching a game people are playing is a nightmare. On the one hand, you have all these people experiencing problems with the game, and you desperately want to fix their problems.

On the other hand, is the fear that changes to the code may actually change something somewhere else and cause problems for people who are currently playing the game fine. Everyone has a different setup, with different hardware, and plays differently, so its’ very hard to have an absolute test case when you know you fixed bug A without introducing bug B.

Worse, is the nightmare that without a huge room full of QA experts like the big retail studios, you can either do some basic tests and release a new patch, or wait 3 days while you methodically test the new patch yourself. Neither option is easy, or popular, and whatever you choose you uspet some people.

I know some people have performance issues with the new improved 1.03, the one that fixed the sound issues (AFAIK). So today, rather than working on fun gameplay stuff (area of effect damage) and AI orders, I’ll be profiling the sound system code.

I did mention it was a beta didn’t I?
Actually people have been VERY understanding, given all the bugs that leapt out of the woodwork the nanosecond I put this pre-order link up. As expected, its a combination of hardware-related crashes I can’t re-produce (The menu battle bug, the sound crashes) and just UI things that I never thought to check (submitting a blank serial code, deleting every ship, fielding ships with zero modules…)
I’ve fixed a bunch of stuff, the real urgent ones, and released a patch, and hopefully my auto-patcher will automatically update everybody. As of this morning, the game is much more stable and playable.

There are a TON of things I need to improve in terms of UI, to get the game more usable. I was amazed to discover so many people prefer mousewheel zoom to be reversed to the way I like it, but that’s an easy fix. I have to totally re-code a lot of Ui stuff (ship hull browser, challenge browser) to make them more usable.
And I’m going to crack on with that passionately, because only when all that is done do I get to do the real fun stuff, which will be the reacting to balance and gameplay issues, ‘stacking’ of ships, better AI orders for the crews etc.
I’m overwhelmed with the feedback from everyone and pleased that people seem willing to put up with a few days of crap in order to get a polished game. My priority this morning is the sound-related crash.
I’m working on it!