I’ve been redoing the deployment screen for the game today. I’m a bit unsure of how this bit should work. basically the flow of the game is this:

The deployment screen is basically where you say “The Enterprise should get no closer than 5,000 meters to the enemy cruisers and blast away, while fighter wing 3 protects it, meanwhile bomber squad 2 will charge in and attack the enemy frigates”

So you need to do lots of fiddling. The current interface is shown below (click to enlarge) 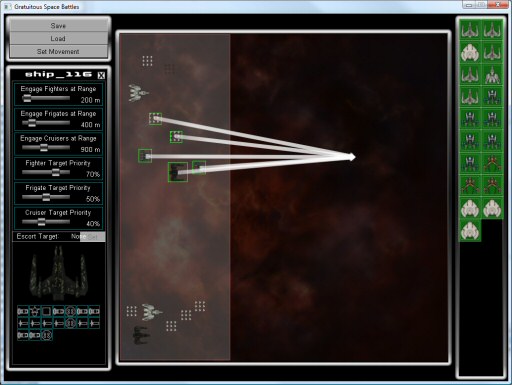 The fleet is on the right, you drag them onto the map to position them within your deployment zone (light rectangle). eventually, approx enemy deployments will be shown on the map too. The sliders on the left is where you adjust the rules of engagement for each ship. This is all very fiddly because do I allow you to set multiple waypoints? And do I make the maps bigger so positions are more tactical? if I do, the ship icons will get horribly small on minimum res (1024×768). Do I abandon support for 1024×768? or allow this screen to zoom or scroll?