Jack (my youngest cat) was in fine form today. I opened a bedroom window and he was looking out of it, then decided to leap out and grab the top of the open window with both paws. I don’t think he had planned ahead as he now dangled by both front paws from an open window with no easy escape route. Almost immediately he lost it and fell.

Thankfully he fell maybe 5 feet onto the conservatory roof. and he seemed fine, albeit slightly baffled. I’m sure it’s all in a days work for him. He should concentrate his energy on defending the kitchen from the black and white cat that comes in at night to eat his food (caught him twice). That cat can sniff food through TWO catflaps in an airlock-style setup, so he must be hungry. 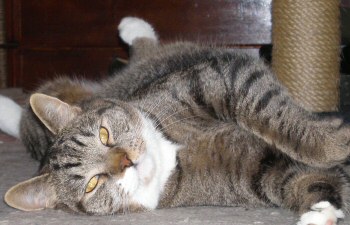