Ok call me “mr arrogant” if you like, but when someone I knew suggested I register cliffski.com, and noted it was available, I agreed and did it, hence the new blog header. Almost everyone on-line knows me as cliffski, so it’s probably worth doing. The last thing I want to do is become a megastar and find this happened.

Today has been (so far) a day of answering businessy emails and updating the website. The blog header is now a hyperlink to the newer, brighter, whiter site. It was a long time coming, but I am happy with the slightly newer look.

I got a lot of suggestions and advice for radical redesigns of the site, much of which I agree with. Some people don’t like the positech logo, and a lot of people think the layout of the main page needs changing. Plus a lot of my older web pages which I no longer link to directly haven’t been updated and are a bit crap still.

But the main thing is, the site is better this week than it was last week. Slowly but surely I make progress in such things!

I’m not writing any code right now, just doing promotion, PR and businessy stuff and negotiating various deals. It will be cool to jump heafirst into the next game, but I won’t be starting it for a few weeks. I’m mega busy with other stuff, still knackered from my holiday, and have damaged my arm somehow. Possibly through archery. I’ll get back into the swing of it soon I’m sure :D

Movie Tips from the plane trip:

Let’s be honest, the positech website is not an example of fantastically awesome web design is it? The design is by me, the humble owner/ coder/ designer/ dogsbody, so I guess I shouldn’t feel bad when comparing it against multimillion dollar company sites, but I do, and I’m trying to make it look less amateurish. here is my first attempt. 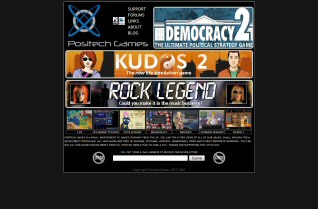 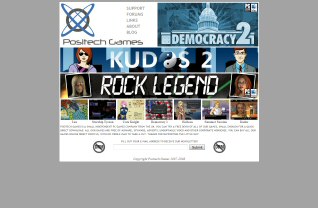 Am I getting better? any suggestions or tips on how to improve it? I know it doesn’t look awesome, but I think I’m getting better at it. All feedback mega-welcome

When I asked why people pirated games I got a lot of people saying something along these lines:

“Demos suck! They are such a small part of the game. I HAVE to pirate the game to see if the full version is any good, rather than just the bit they showed me in the ‘demo'”

But after a month of trying a very long (60 turns) demo for Kudos 2 I have concluded that this just isn’t true because:

1) The pirates still pirate the game anyway, and

2) The long demo seems to be contributing to a lower conversion rate, ie: people are trying the demo and not buying the game as much s they have with my other games.

Now I know that it is very tricky to work out whether this is because the demo gives too much game away, or whether its a problem with the quality of the game, but given some very good reviews, and some very positive forum and email responses from buyers, I think generally the game quality is pretty good (certainly it’s way higher than the first game). I am guessing that the demo basically gives away several hours of entertainment for free, and it’s just too darned long. So I halved the length of it and re-uploaded a new demo today to see if that improves things.

A GOOD demo (from a business POV) is one where as it kicks in, the player thinks “What? OMG I was getting so into this game”. In a sense, the demo is the first course of a meal, the opening scene of a movie. Give away too much, and you lose sales. Most people will take a free starter rather than pay for a whole meal, and I’m sure a lot of people like me get bored towards the end of todays’ long and tedious movies anyway :D

In unrelated news, check this out. Seems some people are really getting into modding Kudos 2 :D

Well I’m back at last! and very tired and jetlagged to oblivion. Initial wading through emails suggests that I haven’t sold many games while I was away :( this is a bit of grim news, but now I’m back and managing my ads and replying to emails etc, things should (hopefully) pick up again.