So… I’ve released version 1.014 of GTB. It has some under-the-hood changes nobody will notice (yet) but also this:

The big change there is 3). I wish I’d thought of this originally, but like all my games, they evolve and improve in response to player feedback. The game will now automanage and keep up-to-date a separate division for infantry, vehicles, buildings and support structures/vehicles, and you can swap between them as before using tab or alt+tab.

because I’ve added this *now*, it’s not the default, and you need to go into the division manager and turn it on. if I was more organised, I’d be tracking that as a stat. The trouble is,  you get a lot of people buying games cheap in a sale who play 2 levels, then never return, which is bad for all kinds of reasons (it encourages designing purely for the casual gamer, for one), so ideally I’d be tracking people who play 10+ missions, and then analyzing what percentage of them even use divisions, and how many of them enable auto-management. My stats tracking sucks, yet again. I’ll get it right in my 99th game, I promise!

4) was also an embarrasing bug that I wanted to fix, and is the main reason I suddenly rushed this update out without much fanfare.

In other news, I’ve been working on some future stuff (early days yet) and also re-uploading a bunch of ‘signed’ exes to keep the paranoid gremlins at Norton Internet Security happy (god knows why).

The steam sale was pretty good, but not wallet-burstingly so. We do live in strange times. As a game designer, I’d prefer less, high-margin sales than a whole slew of people grabbing GTB for cheap and hardly playing it. I’m definitely from the hardcore gaming school, rather than the ‘angry-birds’ school of gaming, and I hate to see gaming change to the point where everyone owns hundreds of games, but has played hardly any of them. That’s not a market working properly, it’s like a weird mind game.

It’s amazingly sunny right now in the UK. I know because my solar power readout tells me. Obviously I’ve never gone outdoors. That would be mad.

I’m working on adding this as an option for Gratuitous Tank Battles.  If you are red-green colorblind can you let me know if this looks better?

Here are the patch highlights:

You know what you really need? A video of me explaining how to make a custom mech in GTB. Admit it…

Your wish is my command: (it’s hi def and allsorts)

One day I’ll take a day off.  In fact, ideally, it would be in the caribbean. anyway…

I’ve been improving the graphics for the flamethrowers in GTB, which sucked. They look a lot better in video, but for now, here is a little image (click to enlarge) 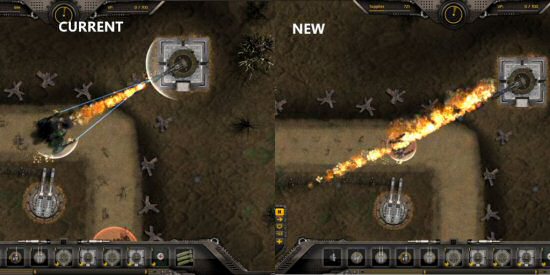 As well as having a nicer effect, they also leave more obvious flame effects on burning troops, and also they set fire to any units like tanks etc as well, just briefly, which looks much better.

The other BIG news in GTB update land is a new feature which is something I hesitated to change, but I personally found frustrating, so I suspect a few players do too. In the current game, if you place infantry in a trench, maybe there are 12 free slots, so you get 12 infantry. If 11 of them get killed, you have to twiddle your thumbs and wait for the last one to die before you can put any more in that spot. Worse, you can’t actually deconstruct infantry. Sooo…

As of the next patch, you can drop infantry on top of existing ones in trenches/bunkers and they simply fill in any vacant slots. You can’t do it where there are no free slots, and you can happily mix and match infantry of different types, so you can have 8 infantry and 4 snipers in one trench, if it works out that way… I find this to be much better, and it just removes a tiny frustration in the game.

There are lots of other improvements coming in an imminent patch, I just thought I’d mention those two today :D

In other news, i stupidly ruined my 24″ iiyama monitor by pulling out the HDMI cable too hard. I pulled the whole socket out :(. I can’t cope with 1 monitor so immediately bought a second, but it’s 1900 x 1080 instead of 1200, which I preferred. Happily, iiyama will repair the old one for the cost of me posting it (£15.30) plus £15 inspection fee, £20 labour plus parts. (They ship it back free). A new HDMI socket can’t be more than £1, so we are maybe paying £51 for fixing a £150 monitor. The plus side to this is that a) it’s a 1200 res monitor which are rare now and also b) It means a perfectly good lump of metal, plastic and circuitry didn’t end up in landfill for the sake of a tiny broken piece of metal. I’d feel bad otherwise…