Coding your own ‘middleware’ is easier than you think

I have a system in the early access version of production Line that when an error happens that I assert() on, it logs that error out to a debug file, along with a timestamp, and the file name and line number of code where the assert failed. This is easy to do (google it). I recently changed this code so it also posts the error message, line number and filename data to my server (anonymously, I have no idea which player triggered it). That code basically just uses the WININET API to silently post some URL variables to a specific php page. That page then validates the data to make it safe, and runs an SQL query to stick the data into a database on my server.

IU can run SQL queries on the server to see what bugs have happened in the last 24 hours, which ones happened the most, what the version number of the game was, and how often they are triggering etc.

This has proven to be awesome.

The default solution these days to this kind of stuff is to buy into some middleware to do this, but thats not how I roll. I also have some balance-tracking stats analysis stuff that does the same thing. I can tell if the game is too hard, or too easy, or if players dont get to build electric cars until hour 300 in the game…and all kinds of cool stuff. This is the sort of thing that middleware companies with 20 staff, a sales team and a slick marketing campaign try to flog to you at GDC in the expo. Its really not that hard, it really is not rocket science. I get the impression that the majority of coders think that writing this sort of stuff is an order of magnitude harder than it actually is.

Oh also, production Line checks once per day on start-up to see if there is a newer version, then pops up a notice and a changelist if there is (for non steam versions). Thats home-grown code too, and its easy, EASY to do,m once you actually sit down and work out whats involved. 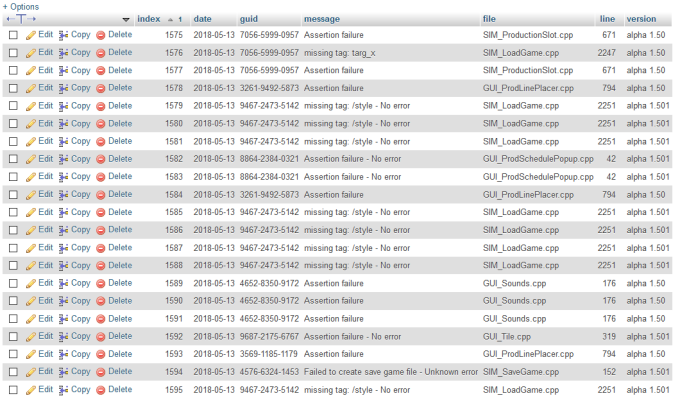 I know the standard arguments in favor middleware ‘it comes with tech support, its faster than coding it yourself, it allows you to leverage the experience and knowledge of others’, but I reject all of them. The only reason I know how to use WinInet, php and SQL and all that sort of stuff is because I taught myself. I taught myself ONCE in the last 36 years of programming, and I know how to do it now., I have my old code, and my own experience and skills. I dont care if XYZ Middleware INC is going to go bust, stop supporting my platform, double their prices, or stop answering emails, I have all this experience in house.

When you look at most middleware, its vastly bigger, more feature packed and complicated than you need it to be. Middleware has to be, because it has to be all things to all people. My stats tracking and error-reporting doesn’t have to work on IOS or on OSX or on mobile, or XBox or Playstation. it doesn’t have to be flexible enough to talk to four different database types, or support Amazons AWS. I don’t NEED any of that stuff, so guess what… the code to do what I *actually* need to do, is incredibly, incredibly simple. Don’t think about middleware contracts and APIs and excuses not to write the code, ask yourself ‘what exactly does the code need to do here anyway?’

I think when coders do that you will find, its actually way easier than you think. I did my error reporting code, both the client side and the server side, and tested and debugged in in about an hour. This stuff is not complex. Stop buying ‘fully-featured’ bloatware you don’t need.