So…Here we are, a few days after the release of Production Line into Early Access on Steam and GoG. How did it go I hear you ask?

Well if you read my earlier post on the pre-release guesswork and nerves here, you will recall that I was hoping to sell 300 copies in the first day, and had extrapolated to that showing the game to be a decent success that i would be very happy with. It turns out we sold about triple that amount (including humble,steam and GoG), so suffice to say I am very happy with how well the game is being received. Also we are getting some very nice coverage like this, which is always good.

On the flip-side, we clearly have a few crashes in the game AND also had a bad problem with balance. Essentially, the 1.19 release which was the EA build was unbalanced in terms of the rate at which the AI researched car technology, and also the number of technologies that could become universal. The system meant that very rapidly the AI had reduced cars to being effectively worthless because you needed a ton of essential tech which you could charge for, and went bankrupt…yikes.

This was patched yesterday, and the AI is now much calmer, the list of tech that can ever become universal is shorter, and the universal tech is still (partly) chargeable, making the game much more playable. of course now a few people say it is way too easy so…thats the next step in the path of game balance :D

The big moment of stress for me over the weekend was a sort of self-induced problem. I had been working for a while (in the run-up to the 18th) on a major revamp of the way car designs are done, allowing you to define different car ‘models’ such as ‘Standard’ ‘Sport’ Deluxe’ etc, and have your production line recognize each car and install the appropriate bits. This is VASTLY better than the old system  that shipped in 1.19. This was also something that players of the game had requested quite strongly through the priorities voting, and something I wanted to get in ASAP. The problem is that I hugely underestimated the ramifications in code of doing this, and how much needed to be changed, tweaked, fixed, and tested. The result was that I had a half-finished feature I really badly needed to finish before I could look at the balance and crash issues people were angry about. 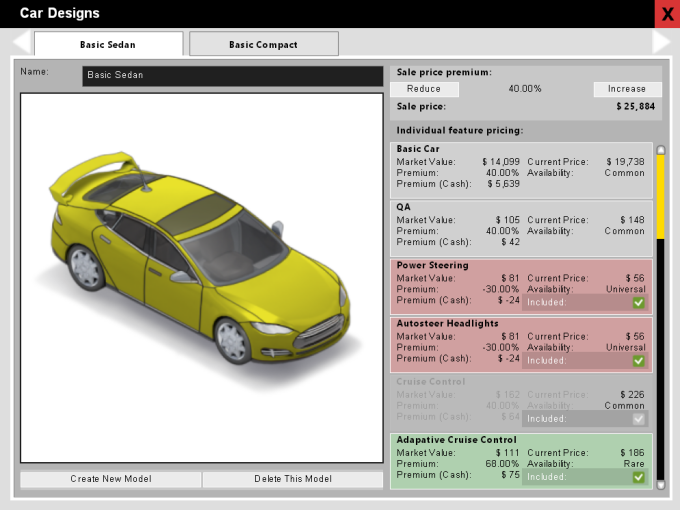 At one stage we dropped out of ‘positive’ steam reviews to ‘mixed’. ARGHHHHHHH.

So to cut a long sleepless story short, I worked a damned lot of hours on coding, testing and verifying this feature, did some emergency code fixing for the balance stuff (which is also a vast improvement) and finally after a lot of testing released 1.20 to the world yesterday (GoG build still uploading…damned internet). As a result we are back in ‘positive’ scores, and things can only get better :D

So…apart from how stressful EA launches can be what else have I learned?

I feel so much happier than yesterday when I was stressed as hell. And yet then, today some extremist maniac blew up children in my country. FFS.