Gratuitous Space Battles 2 is approaching pre-orders + beta. You know the sort of thing by now. The game isn’t finished but you can pre-order now and get immediate access to the beta. Steam early access made it popular. So why not put the game into Early Access? basically this isn’t an early-access kind of beta. It’s a proper ‘we think it’s more or less done’ beta, like betas used to be back in the old days. It’s pretty much content complete (a few more extra graphics & voiceover await). It’s definitely feature complete. It’s definitely playable. it has been optimized a lot, and bug tested a lot. It’s essentially what my idea of a beta is, which is a finished game, with some rough edges, and maybe some compatibility issues. There are a few big things not done, namely translations and ports. The beta will be PC only, and English only. I plan on a Windows/Mac/Linux  and English/French/German/Spanish (maybe more) release when the game actually gets released on steam, Humble Store, GoG. 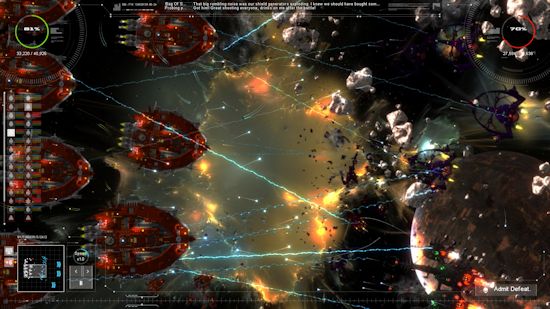 So the beta will be direct-sales only, and will get you a download link & online challenge game serial (no DRM, don’t worry), and a steam key that will be useless until release.

So thats all the warnings and caveats. What will you get? You will get a VERY explodey, lasery, space-battley smorgasbord of laser-death and gratuitous zappyness that makes the battle at the start of the last star wars film look like an episode of Blakes Seven. I’ve kind of gone a bit overboard of the graphical shininess this time. I might have overdone the lens flares a bit, and the particles, and the everything else. And yup, the multi monitor stuff works fine in the beta.

Gameplay wise, it’s Gratuitous Space Battles, but with more ship classes (hello dreadnoughts, destroyers and gunships) and better formation orders, better targeting AI, and *drumroll*… You get to design the ships yourself from components, so they look exactly how you want them. This is I suspect…a bit of a killer feature. It is VERY cool, to design a whole fleet of spaceships then watch them blow up your friends fleet.

So yup, it should be a lot of fun. It’s tons better than GSB1. I can’t believe how GSB1 looks and feels and plays now, this new version is basically laughing at it, like kirk laughed at khans superior intelligence.