The Dirty Dozen sale on showmethegames.com

Behold, it is announcement time! You know I’ve been blogging a bit about my indie game site at www.showmethegames.com, maybe mentioning all the new articles on there written by the talented Dan? Well that was just part of the SMTG world domination plan. Behold phase II! 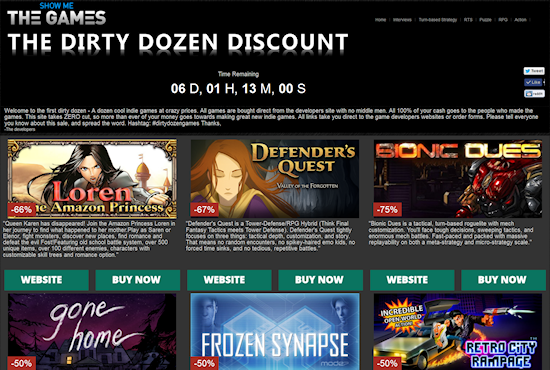 So what’s all this about then? It’s a dozen high quality indie games you should know about, that all have the option to buy direct from the developer, and all of which are on sale for the next week. Some of them have huge stonking great discounts, like a political strategy game I’ve read *great* things about. You should go check out the page right now. And of course, you all know this, but it is extremely helpful if you can share the news on social media, twitter, reddit, facebook and so on. I feel a bit stupid asking people to do that, but then most people complain about paid advertising, and most people complain about self-promotion on social media, and it just ends up as an arms race to see whose readers are the most likely to retweet things, which I guess is inevitable but seems a bit weird. Anyway…. all such promotional help is hugely appreciated. Now… why should you care?

So there you go…hopefully it gets noticed, generates some sales for the developers involved (including me, I’m one of the 12), and it justifies doing it again some time.

3 Responses to “The Dirty Dozen sale on showmethegames.com”