I’ve got totally addicted to Sim City 4. The new version will have to be something very special to make me prefer it to this classic. I enjoyed it thoroughly upon release, but have recently rediscovered it’s charms. Weirdly, it’s performance on my PC is not great. I strongly suspect that this is because it is a game running on an assumption of single-core PC’s, in a single thread, or maybe running on an assumption of low polygon-throughput, given it’s interesting approach to hybrid 3D-2Dness. I would truly love to wade through it’s source code. 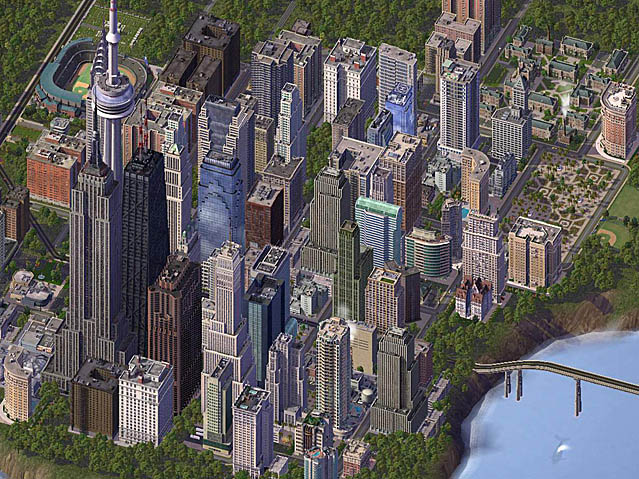 One of the things I find most interesting about SC4 is the extent to which it is sandbox and freeform driven. The player is given a toolkit for city building and left to get on with it. It really is a (pleasant) throwback to ‘make your own fun’ which I find thoroughly refreshing after playing so many modern games, which amount to a checklist of ordered tasks, and a booming voice saying ‘hit this key’ ‘now hit that key’ ‘well done, have 1,000 gold stars for hitting the key we just told you to hit’.

Sim City 4 has no achievements or high scores, or todo lists or much in the way of targets or quests, and I find myself remarkably capable of setting my own. My first city has floundered a bit financially due to my insistence on building an entire metropolis powered by wind turbines. (Annoyingly there are no economies of scale with them :(). My second city is achieving an almost OCD level of sadness with it’s ordered grid system and widespread use of monorails. I didn’t need a ‘wind energy badge’ or a ‘monorail achievement’ to encourage me to play or have fun in this way.

It’s also helping me to understand how some players get REALLY into optimizing their fleets and ship designs in Gratuitous Space Battles. You have no idea how much bulldozing and re-designing I’ve carried out to get the optimum layout for my monorail system :D