There will be a GTB patch very soon to address a few issues. There are some people (tiny percentage, but it must be annoying) who are experiencing performance issues ONLY when running the game through steam. So far, that has us foxed, but we are still working on it… (you can run the game direct from GTB.exe and all is then fine).

There are some crash bugs on design saving and so on, all being fixed, plus weapon and level balancing and a new map…

version 1.009 (in development)
=============
1) Fixed crash when attempting to save out a unit that had a * in the name.
2) Setting windowed mode, whilst also matching your desktop resolution will result in borderless window mode now.
3) Game now explains to player that they won't see any challenges until they are logged in.
4) Online challenge browser now shows complete two-line descriptions rather than cropping them at one line.
5) Fixed bug where the game would hang sometimes on playing custom or online maps as defender with 'scenario units' where a small number of units was included.
6) Fix for occasional crash bug on saving units (in some circumstances)
7) Fixed bug in non-steam version where the default sample units could not be deleted from within the game.
8) Balance:Laser carbine cost up from 3 to 5.
9) Balance:Heavy Pulse laser damage up from 6 to 8
10) Balance:Rapid Pulse blaster damage up from 4 to 5
11) Balance:Light pulse laser damage down from 9 to 6
12) Balance:Salvo interval for incendiary rockets up from 300 to 2000
13) Balance: Heavy Missile Rack damage down from 68 to 52
14) Balance: HEAP Missile thrower fire interval up from 1400 to 1700
15) Balance: Light Missile launcher damage down from 38 to 31
16) Added new map: Mission 12! 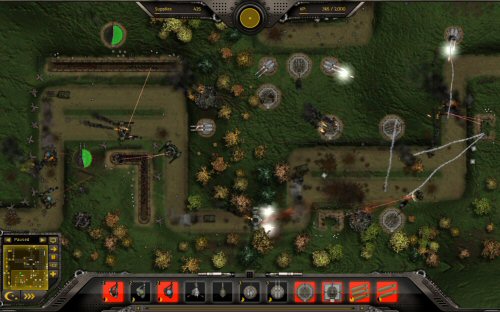