Soo… GTB has got some nice beta coverage in a lot of different places. The response has been overwhelmingly positive, but paranoid and delicate little chap that I am, I naturally get drawn towards criticisms or suggestions for improvement. One that I had not expected, (but in hindsight agree with) came from the rock paper shotgun preview which stated:

“GTB’s eight episode campaign might be playable from two perspectives, incredibly challenging at the highest difficult level, and supplemented by an arsenal of user-made maps and challenges that grows by the hour, but you may still find yourself feeling short-changed.
Though community-crafted levels are always a convenient click away (assuming you’re online) and are rated and commented upon by downloaders, sorting wheat from chaff can still be hit-and-miss.
Cliffski’s inspired Blackadder-meets-Rogue-Trooper fantasy needed more space and time to grow. “

Because I’m not someone that ever pays attention to numbers or stats regarding game content (36 hours gameplay? for who? at what difficulty? at what speed?), I tend to have a bit of a blind spot to that topic in my own. To my mind, the campaign is just a teaser saying ‘here are some of the things you can do with maps’, assuming that even if 1% of the buyers ever made a map worth sharing, the number of maps would be huge.

However, it is fair to say that people don’t necessarily want to play user-made maps, and that obviously the person most fluent with the editor is me, so it makes sense to provide enough maps for people that user-made ones are entirely optional.

To that end, I’m happily chiseling away at the coalface making more maps. I’m 90% done on two new ones, a daytime snow map, And a nice evening desert battle. 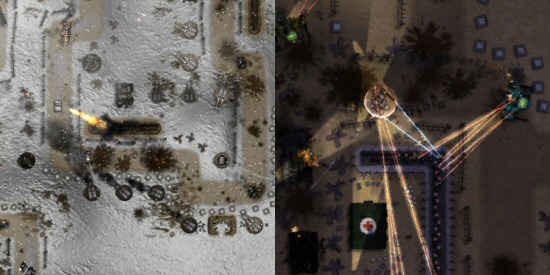 I’m trying to be as inventive as possible. The snow map, for example has two main routes. One is short, but surrounded by concentrated enemies, the other is torourously long but the enemy locations are more scattered. So far, after many test battles, I can’t say that either route is an obvious choice, it all depends on your play style and unit choice.

I’ll almost certainly add more maps before release, especially once I get into the swing of creating them. The shadowmaps and the balancing take most of the time. So if you already bought the game, you have 8 campaign maps, and 2 more will appear in patch 1.04, hopefully this coming weekend. I’m hoping to add some more after that too, but I always try to be very conservative when it comes to promising stuff until it’s actually done.

If you bought / are considering GTB, how important is the number of singleplayer campaign maps to you?