My office wasn’t looking enough like a games studio office, so I got a nice big blown-up poster of the GSB campaign game background framed for the wall. This picture makes it look crap (reflections and blurriness), but it’s actually pretty cool. 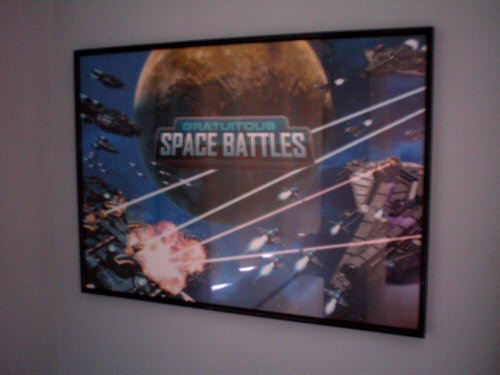 I’ve worked as first, second and third line tech support for IT companies, and I also run an indie games biz and handle my own support, so I’m in a reasonably informed position to dosh out some handy advice here to people who run into a tech-support brick wall. here goes:

Of course, this doesn’t always work. Some companies, which I won’t name, but they are global internet companies, ignore all communication that isn’t by phone. *Sigh*. But you certainly can’t be *worse* off for keeping this stuff in mind.

Theres a new interview over at my little side-project site ShowMeTheGames today:

it’s an interview with the guy who makes a very nice looking space sim that reminded me of freespace and Elite. Like me, he is a workaholic one man indie maniac. Check it out.

Today has been non-GSB work, for the most part. It seems like patches 1.51 and 1.52 didn’t end the world, which is nice. Recently there was a cool review of GSB over at eurogamer, feel free to comment on it if you have an account:

Today was spent partly buying food from the market (one of the best things about working from home is you can go shopping when everyone else is at work), and partly doing the SMTG interview, plus also some basic work on mystery game IV. That involved taking some existing code from GSB and pulling it apart for the bits I wanted. It also allowed me to do a serious re-write of some of it, which it badly needed.

version 1.51 is live. This does the following:

it MAY be causing a bit of a crash. I just spotted it, when looking into something else (typical). I’m working on a  quick 1.52 now. It should only happen if you capture enemy fighters, i think, and it s a popup message you can click ignore to, anyway. Ironically, it’s a pop-up message helping me find a rare bug, that I still can’t find :(

Anyway… I have fixed a bug where fleets dissapear on retreating if you viewed the post-battle stats. that will be in 1.52 as well. Plus, I’m working RIGHT NOW on a fix for a retreat related crash bug. I think it’s caused by retreating with a fleet where there is a friendly planet to retreat to, but your ships cannot move there due to anomalies. It should be fixed in 1.52 as well.

The sheer tonnage of code in GSB is staggering.

I hope I get this bug squashed before the apprentice is on :D BAGGS THE BRAND!