In amongst everything else, work continues on the campaign mode for a future expansion / game / whatever for GSB.

Here is what the map currently looks like (very work-in-progress). 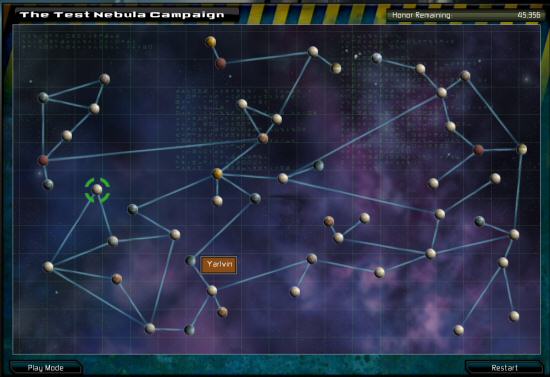 Originally I had planned to just string together a bunch of scenarios (new ones) and have them play out like a very simple singleplayer campaign. The big difference, and what made this worth playing, was that you kept the same fleet, so for the first time you had to design fleets that were all-rounders, rather than tailored to a specific enemy. This would make the game more strategic, and elss trial-and-error, and would be l33t. I still like this, and I’m keeping it.

However, for whatever reason I started thinking bigger than that and I am increasingly linking in the online challenges with the campaign. Now the map is entirely online-integrated. What this means is as follows:

You grab your fleet and move it to planet X. The game tells the server that you have moved to planet X, and it sifts through a list of all possible enemy fleets it has stored that will provide a decent challenge for your current fleet, and one is selected for you. That fleet, together with its orders and deployment gets downloaded and becomes your enemy at planet X. That fleet *might* have been designed by me, or it may have been a fleet extracted from an existing online challenge. In other words, you are playing against someones challenge fleet. (If you dont have expansion pack races, they won’t show up, you will get vanilla enemies.)

That fleet might out-gun you, or maybe you just aren’t equipped to fight against it for whatever reason. If so, you can retreat, and choose a different path. Here is where it gets fun:

if you decide to go back and fight that planet X challenge again, the server remembers, and YOU get the same enemy again. there is no going-around them if you want to go to planet X. Not for 24 hours. Then, then server ‘forgets’ who was there, and you may get a different fleet if you try again. Thats 24 hours in the real world. As in, come back tomorrow.

Everyones fleets will be different, and people will be at different skill levels, so the fleets are not persistent across everyone. Every player has a unique view on the world, its just that the fleets they encounter are player designed.  I’m trying to design this to be ‘massively singeplayer online’, in that you are playing a changing, dynamic, partly player-populated world, but without the direct competition or griefing that can ruin most MMOs.

All of this stuff is in and working. It’s the other 99% I still need to code :D. I have grand plans for the ‘point’ of the campaign game. I want a freeform universe for you to explore and conquer with your fleet, and need to add some capabilities to different worlds to encourage you to move your fleet around. Plus achievements and so on. There is a ton to do, I want it to be l33t. In the meantime, there will be another new race coming to the game.

Yoru thoughts on how this stuff will work, are most welcome.