Ok, so patch 28 for gratuitous space battles is out, bringing the game to version 1.28. Hurrah. Lets take a looky at the two big new things (in addition to the major crash bug that was somehow still in the game, and is hopefully now hunted down and killed).

This is a big deal. If you go to the challenges screen, there is a new ‘custom challenge’ map, which opens up a whole new screen showing stuff to fiddle with to basically create your own map, from existing backdrops, plus settings for pilot limits, budget, and the supply limits or spatial anomalies present. You want a battle with a 10,00CR budget, 4 pilots, no shields and no missile modules? You got it kiddo! 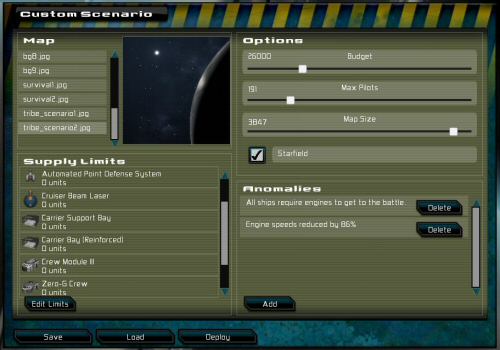 You can save out these custom scenarios or load them in, (if you save them out, that lets you name them, otherwise they default to ‘custom map’. Clicking the deploy button takes you to the normal setup screen for arranging your own fleet, and from there you issue a challenge as before. I hope people really investigate this as an option for the game, because it gives a lot more creative control to the player. If you thing fighter rockets are overpowered, you can issue a challenge where there aren’t any, and see what other methods people use to beat you. if you like a certain map but wished it had a ‘must have engines’ requirement, you can do that too. And if I add in extra anomalies or scenario options, they will all end up in this editor too.

The game now maintains an on-line ‘inbox’ for everyone, and auto-sends you a message when your challenges are beaten or played, or when someone sends you a challenge. It also gives you the option of sending post-challenge feedback to the issuer. This means less wondering how the hell they beat you invincible fleet, and more reading the gloating from your nemesis, which is of course, all in the spirit of GSB. 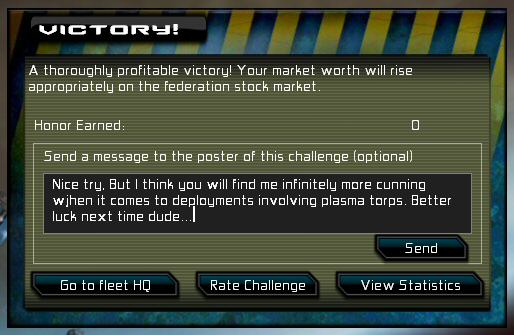 1.28 took a lot of under-the-hood fiddling, but I think these two things were missing from the game, and needed putting in. I wasn’t sure the challenge stuff would be as popular as I wanted it to be, but it has proved to be very popular, so it’s been l33t to go back and add this stuff to an existing game. The game will auto-update if you have registered it on-line, but I’ll be getting updated patches to the distributors like steam and impulse and the others right away.

6 thoughts on Lets talk about patch 28