This was an interesting find (from Crispy Gamer )

Eventually there will be an expansion pack for GSB. I have the mental plans for at least 2 major add-ons for the game, plus tons of little cool things that need to be improved and added, time and sales permitting. I’m currently working 50/50 on bug fixing and tweaks versus support for expansion pack stuff. The current plan is for a new expansion to add an entirely new race full of ships, with some new race-specific weapons and a few new scenarios. That will be the first thing I get done. If that proves sensible, I’d love to do a second one which will be more meta-game focused. Right now, adding new ships is a bit cumbersome so the last few days have seen lots of work on my rubbish ship editor to mean it’s almost slightly usable, despite having no tutorial and being full of inconsistencies and bugs and issues. Certainly it’s not ready for release yet, but it’s getting better. This has also meant sorting out compartmentalised support for mods which should make modding much easier and tidier.

I’ve just moved house, and  this adds considerably to the list of stuff I have to do. I was half way through designing a new cruiser earlier when I had to stop it and drill some curtain pole supports. I bet that never happened to Admiral Ackbar.

Anyway, as I said a while back, this new house is old. Older than Napoleon in fact. When it was built, the population of North America was 2 million, and George II was King of England. This means the house has it’s quirks, not least the scary cellar: 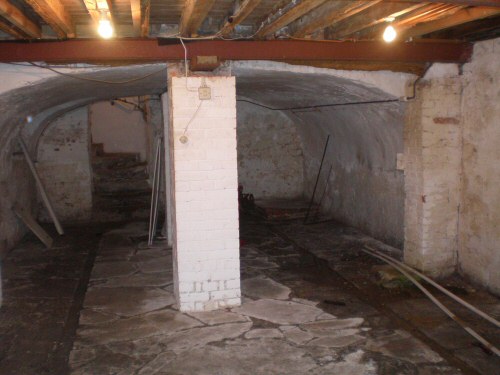 And the bizarre well in the corner, which is actually full of water. Occasionally, water runs in a  channel along the floor. 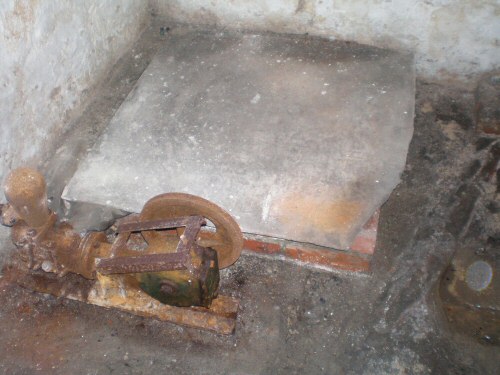 Methinks we will not be storing anything of value down here. I keep trying to come up with a way to utilise this ready and limitless supply of water to generate power somehow. It would rule if I could manage it, because Positech would be the only games company I know of to be powered by 18th Cetury hydro-power.

We moved house recently. I shall entertain with pictures of its quirky bits at some point (the house was built in 1750). Right now, my opinions of the house is ‘cold’. However, even though most of our life is in boxes and the shower (if you can call it that) onyl has cold water and it’s winter in England… None of this seems to bother either cat, which have both settled in incredibly easily and well. 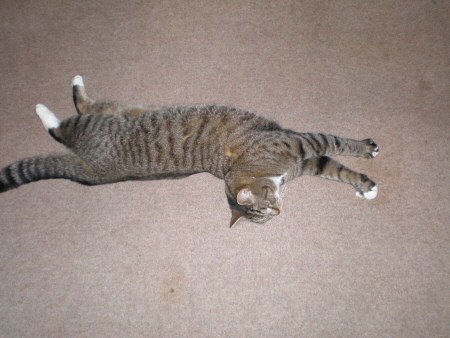 And here is the new office. Right now its empty, and freezing, and badly needs carpet (which I’m sure I’ve measured wrong. what a dork…) and so on, but at least it’s big enough for me to actually move my chair an inch backwards, unlike the last one. Plus it’s on the ground floor! Hurrah! 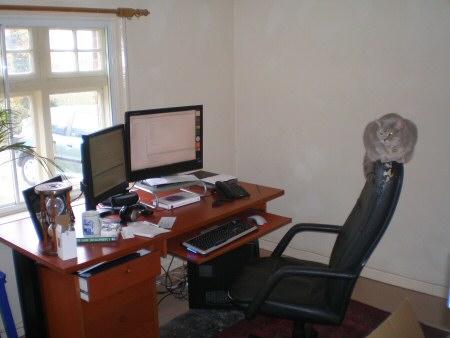 I haven’t had any time at all to really chill out in the new hosue due to GSB stuff, but that;’s indie game development for you. GSB is live on steam any minute now!! (bites fingers).

I’ve been watching big battleships shoot each other. It’s what I do for a job. cool huh? The interesting bit is that despite doing a future-tech sci-fi war game, I find that the images and footage that is most appropriate is WW2. There is a darned good reason that so many good games are set in WW2, and this is it:

WW2 had the best looking weapons.

Now it’s true that napoleonic wars had some darned colorful outfits, but the guns took ages to load and mostly missed anyway. And fast forwarding to the modern day, we have all sorts of gizmos, mostly with American military ACRON-YMS, but the problem is they don’t lend themselves to gameplay. The overhead night vision gunship scene in Call of Duty 4 was very cool, but hardly challenging. Modern weapons, especially in fighter planes amount to a pilot or gunner just pressing a button saying ‘yup shoot that guy so far away I can’t even see him’. Computers are having all the fun in modern combat.

The whole range thing is a total nightmare. Being able to blow up an enemy base from 500 miles away may make strategic sense, but it really screws up your graphics engine if you want the player to see what the hell is going on. And the destructive capability of weapons also acts as a pain. Any sensible futuristic weapon deployed in space is likely to at least have nuclear-missile level explodiness, yet that will obliterate everything for miles. This is not good gameplay fun.

So I find myself, like so many game designers, looking at battles between ships in the pacific and atlantic from 1939-45 and taking inspiration from that. Firing broadsides at ships where you can look out the window and see them explode. It’s not just everyone copying the battles from Star Wars, it’s everyone coming to the same conclusion, which is that in terms of visual entertainment, if you move beyond the technology of WW2, it becomes difficult to feel ‘involved’ in the conflict.

So yup, I know that GSB’s battles make no sense. There is no sound in space, and no friction, and you can shoot for probably 2,000 miles without missing ever, and most spaceships would be best crewed by AI and robot anyway, but this would all make for a sucky game. We can invent all kind of pseudo scientific technobable to justify why we have to fly within 500 meters of the enemy spaceship to shove a torpedo up his exhaust port, and we will continue to do so. Because games are about having fun. Especially fun with spaceships going zap.

Variable Squadron sizes, from 1 fighter up to 16. 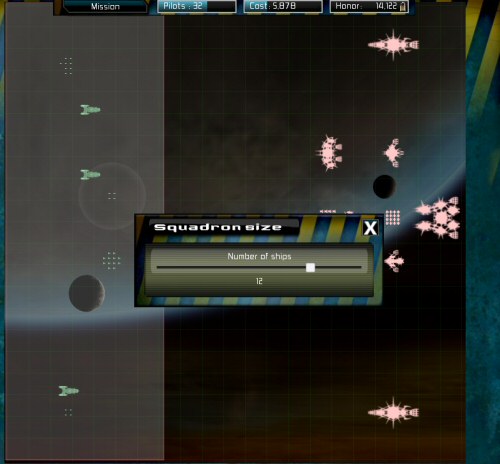 In theory this means you could add 16 fighters and give each one different orders!, as 16 different units :D In practice I suspect it will be used to deploy smaller squadron sizes in cruiser and frigate escort duty, or to squeeze in a few extra ships when you need to use up the whole budget to beat the enemy. In terms of implementation, the squad size goes from 1 to 16 (the current default) and its accessed by right clicking the deployed ship, as a new option just for fighter squadrons. The costs and pilot requirements scale as you would expect.

This feature is in and working, I need to update the AI fleets in the singleplayer game to take advantage of this, and fight a few challenges myself to ensure it doesn’t unbalance the game badly, plus update the manual. Any suggestions or feedback on this feature is most welcome. It’s entirely optional, you can ignore it and just deploy squads of 16 fighters at a time as you do right now.

I made a list of 24 potential new features, and this one seemed relatively simple for a ncie gameplay boost in terms fo flexibility. I look forward to seeing how it is used after evrsion 1.24 is live. The other features are still in the list!