My editors and tools are always really bad. Something has to give when you are a lone developer and with me it’s tools. I’m slowly getting better at it. It’s just a time thing. Today I spent most of the day getting my feeble ship hull editor to let me graphically position and assign particle emitters to damage sprites. (Screenshot below). 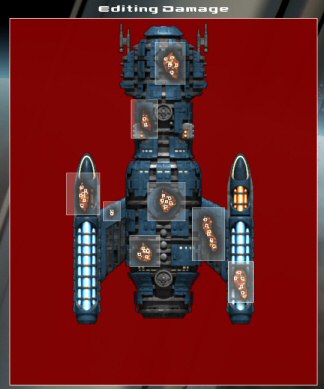 basically when a ship gets hit a pre-defined chunk of a damage texture gets drawn at the impact point, and it comes with a number of attached particle emitters. they are only visible fairly close up. there is also an additional temporary emitter that’s much bigger, but these ones are the tiny sparks that flicker over the burning hull of the ship after the smoke and flames have died down.

It took much longer than it should have to get this in, but it’s good because previously I placed them by hand in paintshop pro, then noted the pixel position and copied it to a text file. (laborious eh?)

This way I can placed dozens a minute and thus there will be a lot more of them :D. Tomorrow I’m going to do nothing but set up fleets and play out battles to check everything works and that the range of weapons and defences is acceptable.