So the fullscreen / windowed toggling is still shaky, but the game now runs in both windows and fullscreen and in pretty much any resolution, including my own 1920×1200 res. Listening to music from star wars whilst testing the game fullscreen at that res with a big battle is a flipping joy.

I’m in ‘lets minimise the number of textures used’ mode. Even at the start of a battle before much fighting, I have this, and it’s not pretty. (click to enlarge). 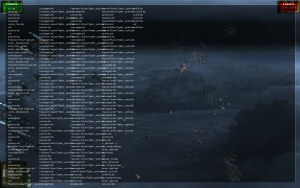 The problem is the running lights use a different ‘blend mode’ so putting them in the same texture as the ship saves me nothing :(. Lots to think about here. SetTexture() can be pretty slow, and you ideally don’t want to be doing hundreds of them every frame. Of course, in games programming, everything is a compromise. The good news is I’m only using up 70% of the CPU to do this stuff, given a minimum 60 FPS.

4 thoughts on Back to optimising