At last I’ve got around to adding laser turrets to the ships, so the beams don’t seem to blast out of just anywhere any more. I’ve also added support for multiple beam origins per weapon, and for them to be different to where the module is placed on the ship design blueprint. This leaves the blueprint looking functional, whilst allowing me to spam a few laser turrets on the bigger ships. It also means you can have a battery of lasers that all zap at once. Maybe eventually I’ll introduce minor delays or other cleverness to make them seem more independent.

There isn’t really a connection between the weapon type and the number of turrets you get with it, but it has no gameplay effect, and is purely visual. So some ships have a slot that links to multiple turrets, and placing a beam laser there will ‘spawn’ multiple turrets, whereas the same weapon on a different ship gets just one.

I don’t think it matters, there is zero connection between the two phenomena in Eve online, and it doesn’t seem to bug people. The main thing is, it looks cool, and I hope, somewhat gratuitous: 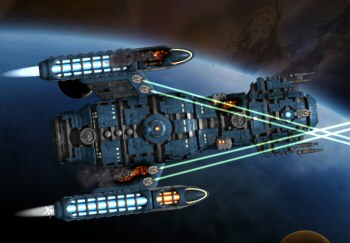 4 thoughts on Multiple beams and turrets!